Fidget toys have a major role to play in busting school-going children’s stress. That is why educationists insist on making education and learning pleasurable through games and toys. Sahul Hameed, who has been selling fidget toys and dolls for over 35 years in Coimbatore, thinks that toys greatly ease mental pressure of children and contribute to happiness.

“We have been dealing in various fidget toys and dolls available in various sizes according to the age of the children. Children make a beeline for colourful toys, and their top choice is ‘pop it’. [The bright purple, yellow and red ‘pop it’ toys let the child ‘pop’ bulging squares, a lot like the air bubbles that people like to pop in bubble wrap packaging used by online retailers.] So it sells in large numbers. Next in line is ‘slime’. These two fidget toys have attracted hordes of customers because of their intrinsic importance in busting children’s stress.  Children are always happy and energetic while they immerse themselves in games,” he said. “Playthings such as teddy bears, building material, doctor kit, kitchen kit etc. are selling like hot cakes. Now that schools have reopened, the demand for toys including ‘pop it’ has spiked and our sales are up. Children not only in private schools but also in government schools are our customers,” said Hameed.

Recognise stress
Doctors say that there are several categories of stress depending on the age and growth of children.

“I have two kids. When we buy our girl plenty of baby garments, toys and snacks, our elder son seems to slip into depression. Sometimes he throws tantrums, shouting and crying.  His sulking behaviour gets on our nerves and as parents, we don’t know what to do and we get distressed. Hard as we try to calm him down, we don’t often succeed,” said Latha, who was on a shopping spree to buy her children fidget toys.

Playthings such as teddy bears, building material, doctor kit, kitchen kit and so on are selling like hot cakes. Now that the schools have reopened, the demand for toys including ‘pop it’ has spiked

“Mine was a late marriage. We have only one daughter. So, we shower our affections on the child and pamper her, buying her whatever she demands. But sometimes, when we are unable to satisfy her by getting her things she’s interested in, because of funds crunch, she is sad, stops talking to us and others and even refuses food. This greatly upsets us. It is on such occasions that we get disturbed, doubting if we have over-pampered our child.  We feel terrified to hear the opinion of doctors and others that children are as prone to depression as adults. Hence in order to pacify our kid, we have come to the shop to buy fidget toys,” said Arockiamary, another mother.

“Teach the children to understand which emotion increases stress and which brings happiness. And make them realise that you are trying your best to bust their stress,” says psychiatrist Dr. Devi.

Also Read:
Teacher of science through toys now based in Chennai 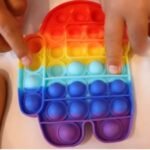 “You can get the children’s cooperation through such initiatives. If they often blame themselves, convince them that self-blame is not good. Trigger healthy changes in their minds. For instance, change their friends, move the bullies away; make the child sit somewhere different in the classroom if she is often teased by a few classmates; introduce new friends; take the child to new places; teach new games; gift pet animals. All these measures will definitely drive home the vital point to the children that they are secure and getting help. It will relieve them of stress and depression,” says Dr. Devi.

The online classes conducted during the coronavirus lockdowns have not proved as joyful and inspiring as classroom teaching.  The children were denied the opportunity to go outdoors and play with others, and they felt bored at home. It was during these days that indoor play materials started becoming popular. Besides, the children felt fascinated by mobile phones and started playing digital games.

Teach the children to understand which emotion increases stress and which brings happiness. And make them realise that you are making efforts to relieve their stress

However, not all fidget toys in the market may be able to help as stress relievers. It is play more than playthings that counts. If it is group play, even better. As Tamil poet Bharathi said, children should hop and play, as their games and play inspires them to focus on studies.

It is this concept that the pre-primary school system revolves around, Play is important for kids; don’t play havoc with it!