Traditional rice is good. So why only a few consume them?

The number of farmers growing traditional rice varieties is increasing every year. Mappillai Samba, Karuppu Kavuni are favourites. The traditional rice farmers are spread over several districts including Tiruvannamalai, Tiruvarur, Cuddalore, Madurai and Thanjavur. The greatest challenge is creating a sustainable market for these rice types.

Natural farming enthusiasts can be found in many places and work in isolation. They are not the majority in any village. Since there are only two or three per village, integrating them and bringing them under one umbrella is a challenge.

Consumers are mostly in cities. People in villages depend on government fair price shops and the PDS whereas consumers of traditional rice are in faraway cities such as Chennai, Coimbatore and Bengaluru.

Consumption is less, too. Kavuni rice eaters will probably have it once a week while they would eat Ponni rice every day. While producers are scattered, consumers are in faraway places, making it difficult to spread the growing traditional rice varieties.

Popularizing traditional rice would require a lot more people cultivating it which can happen only if the produce is easily marketable. Traditional rice farmers don’t sell to government procurement centers since they only get a low price.

Further, government procurement favours white rice. Red and black rice that are cultivated in large numbers today are marketed through other means. For instance, red and black rice grown in red-fed farms of Ramanathapuram and Nagapattinam are for the Kerala market.

India leads in rain-fed agriculture but our policies are more for irrigated agriculture. The support that rice and wheat grown in irrigated farms is almost exclusive and is not available for other crops. For instance, in the ten year period from 2003-04 to 2012-13, the total amount spent to procure rice and wheat is Rs 5.4 lakh crore whereas the amount spent for pulses and other foodgrains such as millets is Rs 3,200 crore.

The bias against rain-fed farming is extensive. Banks don’t give loans, for instance. There is no mechanism to properly distribute seeds for these crops. Big companies have not entered this area of seeds for traditional rice varieties.

Research institutes do not care at all about traditional crop seeds. Though they have the germplasm, they don’t show interest in making the seeds. The names they give are based on numbers and is farmer-unfriendly. Just as Peruvudaiyar became Brihadeeswarar and Sokki became Meenakshi, our Athur Kichali Samba was named Konamani after research. Names like IR8 and Co42 bear no connotation to their origins.

The government should ensure these local varieties are sold in the local areas through the public distribution system. The central government is spending Rs 3,000 crore (Down to Earth, 2019) for fortified rice in which nutrients are introduced to the rice chemically. Such support can instead be given to traditional rice.

The government says it will add iron artificially to rice. But unpolished rice has iron. All red and black rice varieties have additional iron. Karungarisi has some six times iron than typical rice. For this reason, it is used in Siddha medicine.

We are looking for solutions from multinationals rather than finding them within ourselves. We have to procure rice at a proper rice rather than at basement bargain prices. Just as how farmers markets have benefited vegetable growers, local markets can be developed for traditional rice farmers. 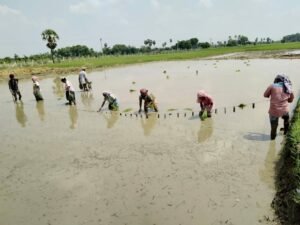 The government and NGOs can help spread the word. Research institutes can tie up with farmers but for that they should respect traditional knowledge that farmers have.

Government events and researchers prefer to communicate in English, leaving farmers out of the loop. That will have to change.

Farmers have already done their bit in preserving these varieties. This should be recognized. Farmers should be trained in how to select the seeds, plant them and so on. Researchers who love farmers are still there in institutions. They should be involved.

The reason why traditional rice varieties are not popular is that the farmers are scattered, unsupported, and policies have not been formulated to support them. It is time nutritious rice with medicinal value and locally appropriate is made available to all.