This record from more than 2,000 years ago makes us think if this paddy variety is still there. Some say this is red rice that we find today. Adhappan, a farmer in Pudukottai, has a rice variety called Aratha Sali. Its yield is lower than that of today’s high-yield varieties. The paddy is red in colour, so is the rice.

Tolkappiar, a Sangam era grammarian, has created what in today’s parlance would be called a genetic record. He describes 23 rice varieties including Mukkoodarpallu, Punugu Samba and Chithirakkal. Our ancient literature has several such references.

Rice is a primary and highly regarded cereal of Tamils. While there may have been cereals such as millets, Tamils have much love for rice. Our ancient literature divides paddy into two types: white and red rice. Ivanam is a white rice variety while Saali is red rice.

Tamil language has two words: nel and arisi to connote rice with husk and rice without husk. In the west, this differentiation was not there for a long time. Common English usage still doesn’t have two separate words. This shows that Greeks and Arabs must have introduced rice as a cereal to them after finding it here. Al-Roos is an Arab word denoting rice.

Today there is much interest in traditions including the food ancient Tamils ate and our traditional rice varieties. This interest has unfortunately fed reactionary politics and superstitions.

Current interest in country rice varieties can be attributed to Sengam Venkatachalam who was also a Tamil scholar. His son Arivudai Nambi is also a scholar and a researcher in bio-diversity. They started spreading the word about traditional rice varieties in Tiruvannamalai region. Venkatachalam helped to rediscover varieties such as KaLarpaalai, KuLLakaar and Arupathaankuruvai. Nel Jayaraman transformed this effort into a movement. Adhappan and others are today holding traditional rice festivals.

Let us understand why we these rice varieties are important. The rice we consume today is largely Oryza Sativa that originally comes from China. Similarly, Oryza Glaberrima from Africa is also there. These are Oryza species that are suitable for cultivation. Wild rice species are there that are not cultivated. The taxonomy of plant varieties is credited to Swedish naturalist Carl Linnaeus although it is known that Itty Achuthan who lived in Idukki district introduced the system of nomenclature to Europeans. Our Mappillai Samba and KuLLak Kaar are part of Oryza Sativa.

We need to find the properties of these varieties. How tall the paddy plant is, the colour of the seeds, girth, when the paddy sprouts, when it is harvested, as well as its lifetime need to be evaluated, says Arivudai Nambi who adds that any paddy variety should be sown and harvested at the time best suited for it. For instance, it is possible that in the stalk, the paddy at the bottom is mature whereas at the top it is not mature. Only the mature rice should be harvested and some of it kept aside for the next crop. Over a period of time, we can have good quality seeds if these practices are observed.

Rice varieties can be hybrid, too. Hybrid is required to tackle climate change, drought conditions and so on. Multinational companies are trying to appropriate seed varieties. There is a need to identify and save traditional varieties. There has been a grassroots movement in the state to save these rice varieties but the effort has faced many challenges. .

Information on rice varieties has been passed on word-of-mouth. Scientific research is needed to support this native knowledge. Similar research elsewhere in India has yielded constructive results. The Central Food Technical Research Institute in Thanjavur has done some research but not all of it is in the public domain. 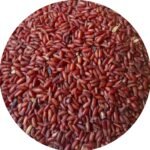 Native wisdom has it that Mappillai Samba leads to more virility. But research is needed to find out if any nutrient support is given by that rice variety that achieves this.

Similarly, Kallundai Samba is supposed to make the body as strong as stone (kallu in Tamil). Thanga Samba is said to enhance skin tone and make it shine like gold (thangam). Karunkuruvai Kadi is used in Siddha medicine. While these have become marketing gimmicks today to sell these rice varieties, what is lacking is good scientific research on the nutrients in these rice varieties.

Rice varieties have been divided in terms of their nutritional content, medicinal values, cultivation requirements, as well as cooking requirements.

Rice is classified based on consumption needs, too. Mozhikaruppu is native to Tirunelveli and Tenkasi. It’s a thick rice variety and has longer shelf-life once cooked – suited for consumption a day after. Unfortunately, the culture of consuming yesterday’s rice, “pazhaya soru”, has vanished and this rice variety is almost non-existent now.

KavuNi is good for making pudding. But pudding (kaLi) is no more made at homes. These dishes have positive health impacts and the cooking method is important. For instance, while a rice variety may contain Vitamin C the body may not absorb it unless the rice is cooked in a certain way.

The ancient text, Tolkappiam, indicates that pudding should be swallowed, gruel should be drunk, and cooked rice should be munched and eaten. It is important to know in which soil, what type of seed should be sown at what time of the year. What is also important is how the rice is cooked and eaten.

All this genetic wealth, traditional knowledge is at stake now. While we are losing them, multinational companies are trying to appropriate them in the name of patent rights. There is an urgent need now more than ever to save our traditional rice varieties.

The author is an organic farming expert and activist