Subramaniya Bharathi lived a remarkable life. His life was full of interesting events and anecdotes. Many hear these stories made popular by word of mouth and ask me if the story they had heard was true. I have often tried to verify the authenticity of these stories.

For instance, once, Bharathi was travelling by train from Tirunelveli to Chennai. The train was crowded and brimming with people. The train stopped at all the stations and picked up people. A folksy turn of the phrase would describe the crowd as so packed that even a sesame seed couldn’t roll down between the people.

Bharathi had, fortuitously enough, space to stretch his legs. Not someone to let go of the opportunity, Bharathi stretched his legs and went to sleep, unmindful of the crowd. A man who got into the train was irritated to see Bharathi blissfully relaxing and sleeping with his legs stretched when he and others couldn’t even get standing room. He tried to shake Bharathi and wake him up but Bharathi couldn’t be disturbed. He started yelling at Bharathi and his family. But none of that reached Bharathi. Full of righteous indignation, the man again shook him to wake him up.

Bharathi woke up and gave a piercing look to the man with his blazing eyes. He then spat at him in disgust. With Bharathi’s saliva dripping down his face, the man looked at Bharathi in shocked surprise.

This story is true and I have retold it in my style. But Bharathi being Bharathi wrote a verse on this. [பாதகஞ் செய்பவரைக் கண்டால் – நாம்; பயங்கொள்ளலாகாது பாப்பா; மோதி மிதித்துவிடுபாப்பா- அவர்; முகத்தில் உமிந்துவிடு பாப்பா] He advised the baby – the pappa who served as his muse in Pappa Paattu – that if someone committed a heinous crime or a grievous act, the baby shouldn’t be afraid. Instead he should take him on, stamp him out and spit on his face. Subramaniya Bharathi wasn’t just advising pappa but carried it out before penning the verse in Puducherry.

Another verse in Kannan En Kadhalan invokes the Srungara Rasa by saying that his heart beats or cries out like a blazing lamp outside and a squirming bait (worm) in the (fishing) hook. [தூண்டிற்புழுவினைப்போல் – வெளியே; சுடர் விளக்கினைப்போல்; நீண்ட பொழுதாக- எனது; நெஞ்சந்துடித்ததடீ]

But has Bharathi really suffered like a worm, squirming and struggling for life? In Siddhakkadal, he has showed that he has.

Siddhakkadal is Bharathi’s height of achievement in prose. His words carry such power as the big waves in it.

Suffered like a worm
It was July 1, 1915. Bharathi was living amidst paddy fields in Puducherry at that time. His daughter had high fever. Bharathi faced the prospect of being disappointed in his expectation that his daughter will grow up and thunder his words on stage like a Tamil heroine.

The child, Sakunthala was unable to even speak due to the high fever. Chellammal, Bharathi’s wife, was at her wit’s end. There was no money to pay the doctor, none to support them. Bharathi’s favourite deity and muse, Parasakthi, was apparently testing her devotee.

Bharathi wrote asking, or rather exhorting Parasakthi. He composed songs for her every day and, so, she should grant all his wishes.  Because of her grace, his daughter got cured in two months. But in that time he and his wife were struggling, writhing in mental agony like a worm, he wrote. Bharathi used this metaphor to express mental anguish in a different context in Kannan Pattu. 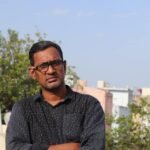 Bharathi’s life is full of stories that need to be told. Tamils everywhere should hear and appreciate the stories. I have brought out the book, Bharathi Vijayam, in two parts, whose thouand pages are filled with stories from his life.

Desiring the new
Bharathi came to Chennai to pursue journalism. In 1904, he started working in Swadesamitran newspaper. But he didn’t do just that job. His primary interest was politics. His desire was to vanquish the foreigner (British).

Bharathi wanted to meet people and give political speeches. There was none to facilitate that in the beginning. He would go to Moore Market along with his friend, Sudhendranath Arya, and sing and speak in front of people.

Bharathi was the first Tamil poet to go to the streets and speak against the British. This had not happened before. Tamil scholars would only sing sweet songs.

Subramaniya Bharathi lived his exhortation to desire the new. His public platforms were indeed new for his time.

To hear these streetcorner meetings at the Moore Market, many young people would gather. One such young man was Namakkal N Nagaraja Iyengar. He had come to Chennai for college. Through him, poet Namakkal Ramalingam Pillai got to know Bharathi.

Bharathi could attract young people. His Parasakthi had granted him the boon in abundance.

Bharathi did not use cryptic words. His language was direct and straightforward. His style was bold and confident. This he unfailingly adopted in his own life.

Walk upright
When he was living in Eswaran Dharmaraja Kovil Street in Puducherry, Bharathi saw a boy walking to school with a sling bag.

Bharathi didn’t know him but that didn’t matter. He told the boy to look straight, stand upright and walk.

Bharathi told the boy that even a cock crows with its chest puffed up as if there was none to equal it, and asked the boy if he wasn’t a human being and should he feel smaller than a hen. Bharathi told the boy to correct his posture and walk. That boy’s name was T N Chandran. He grew up and wrote about the encounter with the poet. Bharathi wasn’t alive to read it but the advice he gave was alive.

Subramaniya Bharathi continues to live through his words.