The announcements include the celebration of Bharathi’s birth anniversary as ‘Mahakavi Day’, the distribution of selected works of the poet to 37 lakh students at a cost of Rs 10 crore, recognising the contribution of research scholars of his poems by awarding Rs 3 lakh each and forming a separate department for Bharathi’s poety in government libraries

The announcements gladdened the hearts of those who were working to take forward Bharathi to the next generation. But, this also has irritated a few who want to gain political mileage in everything.

Questions are raised how DMK had suddenly found a love for Bharathi, with an aim of creating differences. It is true that the DMK had not presented Bharathi as their ideological face. But, it is also true that the party did not pour scorn on the poet either. Taking one of the truths alone for argument is wrong. 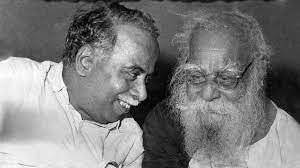 “We cannot expect Bharathi to know about the historical issues of Aryan-Dravidian conflict. The times of Bharathi were different from the present period” — CN Annadurai

DMK founder CN Annadurai always celebrated Bharathi. He welcomed the efforts of writer and journalist Kalki who collected donations from the people and erected a memorial for Bharathi at the poet’s birthplace of Ettayapuram. Anna wrote, “We cannot expect Bharathi to know about the historical issues of Aryan-Dravidian conflict. The times of Bharathi were different from the present period. We cannot expect him to analyse the ideas of present times. In several places, Bharathi had used the word ‘Aryan’ in an appreciating tone. At that time we were learning ‘Arya Madha Ubathyayanam’ at school. All the leaders of Tamil Nadu were part of the Congress party then”.

In his essay titled “Bharathi Paathai’, the DMK leader said “The issue of Aryan-Dravidian conflict is a research subject and history. We cannot see it in Bharathi. Aryanism is a culture and way of living. Dravidianism is a separate culture and way of life. We cannot see them in Bharathi’s works. During Bharathi’s times, we did not have the theoretical explanations of today”.
When there was debate in 1948 if Bharathi was just a poet or great poet, Anna issued a pamphlet titled ‘people’s poet’. In Anna’s vision, Bharathi need not be a poet or great poet. By terming Bharathi as a ‘people’s poet’, Anna made him a public asset. The DMK leader’s speech in English also describes Bharathi in the same words.

However, Dravidar Kazhagam founder EVR Periyar who hailed Bharathidasan as the ideological poet of his movement had objections in accepting Bharathi. The DK’s party organ, in an article in 1947 October 18, ridiculed the efforts to build a memorial for Bharathi at Ettayapuram. The heading given to the article penned by Eetti asked whether it is a Bharathi memorial or the victory symbol of Brahmins.

The article alleged that the construction of the memorial was an effort to save Aryanism from the rising Tamil sentiments. The article also painted all the functions related to Bharathi in the same vein.

Eeti wrote, “The erection of a memorial to Bharathi, a Brahmin and arranging consecration are the traditional tactics used by Aryans. We have no objection to calling Bharathi as an ‘innocent’ poet with an innocent hear or a poet who inspires emotions through his poems”.

“But, celebrating Bharathi as the greatest of Tamil poets and a poet who inspired Tamil sentiments or a poet who paved the way for a dignified life with self-respect for Tamils will only destroy Dravidian race. Aryans are only trying to suppress the Dravidian sentiments by citing Bharathi”, the article said.

So, it is clear that there was a contradiction between the DK and DMK in accepting Bharathi. The stand of DK which is based on anti-Brahminism is understandable. But, the DMK founded by Anna did not follow the same principles. The DMK embraced Bharathi generously and Anna’s own writings is a testimony to the stand.

Former DMK president M Karunanidhi, who was accepted as a disciple by Bharathidasan, did not have any objection to accepting Bharathi. Karunanidhi has quoted Bharathi in his writings.

During Bharathi’s centenary celebrations In 1982, Karunanidhi wrote an article in ‘Thamizharasu’. In his article, Karunanidhi says “The song of a cuckoo, the dance of a peacock and the running of a small child- all these beautiful sights remind Bharathi to everyone. No one can forget Bharathi’s ‘Kuyil paattu’,” the former DMK leader said.

He also said: “Bharathi’s verses do not wound his enemies, but only refines them. Poets during Bharathi’s times were free of the present day arrogance arising out of knowing the techniques of poetry”.

Anna did not have any hesitation in using Bharathi’s poems in stressing a opinion. Karunanidhi went a step further and tried to turn Bharathi’s dreams into reality. He tried to implement the Sethusamudram canal project when the DMK was in power at the Centre in the National Democratic Alliance government headed by Atal Behari Vajpayee. This was an effort to achieve the dream of Bharathi who wrote ‘Singala theevinukor palam amaippom;Sethuvai medurithi veedhi samaippom’.

Combining Bharathi’s appreciation of the landscape of Kanyakumari and Thiruvalluvar, the former DMK leader erected a 133-feet high statue to Thiruvalluvar in Kanyakumari.

Karunanidhi, when he was the Chief Minister in 1973, converted Bharathi’s house in Ettayapuram into a memorial. DMK had recognised Bharathi at appropriate occasions from the times of Anna to present Chief Minister MK Stalin. But, the DMK’s parent body DK had never endorsed this and a recent article in DK’s organ ‘Viduthalai’ is another testimony to DK’s hatred towards Bharathi.