Poet and freedom fighter Subramaniya Bharathi, as we know, was also a journalist. His reports on the devastating 1916 floods in Puducherry were recalled on inmathi.com during the Chennai floods last November. Bharathi was a keen journalist who had a vision about the profession and its practitioners—principles that are relevant even today.

He had laid down his vision in an announcement in 1908, calling for reporters to send in their contributions to his newspaper, India.

Bharathi’s missive, written in bullet points, gives us an idea of his editorial philosophy. In the postscript he says that unlike other publications, India’s mission was to serve public interest. So, what serves public interest and advances awareness among people is welcome.

The first theme in his bulleted list is the unjust and oppressive exercise of power by the government. This is in keeping with Bharathi’s practice of adversarial journalism, where the reporter represents public interest and exposes wrongdoing by officials

Bharathi then takes care to say that without good reason marginalized people and those who are not in the public eye should not be skewered. This postscript appears at the end of a long list that details who are newsmakers and what is worthy of reporting as news.

The first theme in his bulleted list is the unjust and oppressive exercise of power by the government. This is in keeping the Bharathi’s practice of adversarial journalism, where the reporter represents public interest and exposes wrongdoing by officials. As the fourth estate in a democracy, journalism needs necessarily to hold people in power to account.

Bharathi soon follows it up by saying reports can also be about exposing the evil practices of the people. Third is agriculture and how it can be improved, reforms required and so on. 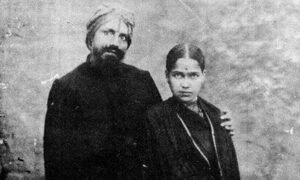 This photograph of Subramaniya Bharathi and his wife Chellamma is said to have been taken by photographer G Krishna Raju in 1917.

A keen student of language and literature, Bharathi invites reports about idioms and phrases in common usage as well as oral histories and folk songs that have been handed down over generations. Eighth on the list are events: crimes, theft, visits of important people, achievements of religious leaders as well as their good and bad deeds.

Bharathi asks reporters to write about diseases such as plague, diarrhea as well as public health and drought. He also asks for reports on manuscripts written in other languages as well as translations of reports in newspapers of other languages. Last on his list are modern novels and plays.

The list and the postscript show Bharathi’s modernist views. He emphasizes objectivity and demands integrity on the part of reporters. He also assures that those who send in reports will be adequately compensated, with the caveat that only exclusive reports will be paid for.

He emphasizes objectivity and demands integrity on the part of reporters

More than 110 years later, his guidelines for journalism and journalists remain valid.

Ad gives freelance rates
Before this announcement, Bharathi had taken out an ad in India telling readers that they could write in news reports and get paid for it. In that ad, he says the news reports should be useful for the people who live in their districts.

Bharathi warns that the news reports should be exclusive, verified for their truth and not be translations of already published material. And they should give, what we today call, the wow effect to readers.

Bharathi warns that the news reports should be exclusive, verified for their truth

Bharathi promises to pay one anna for four lines, two annas for four lines if they dealt with people’s problems, but warns that reports will be edited to make them concise. Bharathi is particular that the news reports should be current and will not be published next week. He says the reports should be reach by the Thursday of that week.