After 200 days of traveling across the country alone, G G Siva Prakash from Madurai is back in his home state with a wealth of experience. The most important among them, he says, is that travel opens the mind and destroys stereotypes about people. In most of the places he went, he encountered warm and friendly people and was sustained by their generosity of spirit. This Republic Day, Siva’s experience serves to remind us all to accept our differences and celebrate them, not be divided by them. 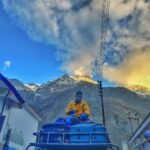 With a minimum budget, Siva Prakash preferred to use public transport like buses, trains, share auto rickshaws and jeeps, cabs and when nothing of that sort was available, he hitchhiked in trucks and tractors.

Having completed B Tech in Information Technology, Siva Prakash needed a perspective in life and wanted to travel across the country. With a minimum budget, he preferred to use public transport like buses, trains, share auto rickshaws and jeeps, cabs and when nothing of that sort was available, he hitchhiked in trucks and tractors. Not only was it affordable, it opened a new world to him. He got to interact with all kinds of people. He says he observed that people do not fit into the stereotypes they are branded with. Most are open and warm.

A traveler by hobby, Siva had already been to the southern states. So, this time, he commenced his journey from Goa on July 23, 2021. From Goa, he traveled to Maharashtra, Gujarat, Rajasthan, Punjab, Jammu & Kashmir, Uttar Pradesh, Bihar, Nepal, North Eastern states like Sikkim, Assam and Meghalaya, and then moved to West Bengal, Odisha and returned to Chennai via Telangana and Andhra Pradesh.

Siva has spent 20 to 23 days on an average in each state. He used a couch surfing app to help him find an inexpensive place to stay wherever he went. At times, he stayed with his relatives and friends in places like Patna and Srinagar.

Not only was public transport affordable, it opened a new world to him. He got to interact with all kinds of people.

In Gujarat he spent one whole month. Siva says Gujarati hospitality is a class apart. “They don’t hesitate to receive you at their home. They treat you well. The public transport is also good in Gujarat,” he says. However, he did not get the same hospitality from the neighboring state Rajasthan, he says. Nevertheless, he traveled across Rajasthan and reached Punjab. He visited Amritsar and Chandigarh. “You would never go hungry in Punjab because of the langar system. Besides, Gurudwaras provide free shelter to travelers,” Siva says.

Jammu and Kashmir was a different experience for him. There was tension in the air following allegations of the army killing civilians mistaking them for terrorists. There were no bad experiences in the strife-ridden union territory but Siva felt that Kashmiris are watchful of any outsiders. “Once you gain their confidence, they are very generous and super good in hospitality. I was given free food and lifts for sightseeing. And, Kashmiri food is awesome, especially the kebabs,” he says.

Uttar Pradesh and Bihar struck him for the over population and the low cost of living. Uttar Pradesh was witnessing a string of election campaigns. “But it appeared to me that religious figures have more respect than a politician in UP,” he says. The streets are always full and things are very cheap in these two states. He could travel even ten kilometers for four rupees in a shared cab, Siva says. The public transport was not bad either but cleanliness was always an issue. “From Gujarat to Bihar, the indiscriminate spitting of pan and gutka is something that strikes you,” he says.

Siva says he had an amazing experience in our neighboring country Nepal. Public transport was time-consuming but the jeeps and shared cabs saved time. However, the roads were bumpy. “Nepal mesmerizes with its natural beauty. And it is a cheaper country for Indian travelers,” he says.

North Eastern states are blessed with the beauty of nature as well. Siva says he was able to meet some army men from Tamil Nadu stationed in these places and they were very helpful to him in visiting places. “Not many speak Hindi there. English is helpful to an extent,” he says. Having studied in Kendriya Vidyalaya, conversing in Hindi was not a problem for this youngster. But how would the experience have been to a Tamilian who hardly speaks any Hindi? “All you need to do is to make an attempt. The people in North India are very helpful. The moment they realize you are a traveler, they do everything to help you. I would say the experience is much better when you compare it with down south,” he says.

They also find a connection because many North Indians work in Tamil Nadu. They are able to recognize places in Tamil Nadu as well. “In Bihar, one man called his friend working in Adyar, Chennai after he learned that I am from Tamil Nadu,” he says.

There were no bad experiences in the strife-ridden Jammu & Kashmir but Siva felt that Kashmiris are watchful of outsiders. “Once you gain their confidence, they are very generous and super good in hospitality. I was given free food and lifts for sightseeing. And, Kashmiri food is awesome, especially the kebabs,” he says.

In West Bengal’s Kolkata, people come to admire the old-worldly charm of the trams and the ambassador cabs painted in yellow. But a ride in an ambassador cab is costly, he says. They charge Rs 150 for a kilometer because they know that their quaintness is what draws tourists. In Odisha, the Puri Jagannath temple is a major attraction, he says. Siva completed this trip at a cost of Rs 80,000. Using public transport and couch surfing apps to find places to stay all helped cut down his expenses. The way Sivaprakash earned this money for travel was even more interesting. “After my college, I went asking for money from my parents for traveling. My father said it would be memorable if I traveled on my own money,” he says.

For two years he worked with Myntra, an online apparel firm in Bengaluru. He saved money for the travel and quit the job when he realized he had enough money. “I resigned in June last year and started traveling from July,” he says. So, what has he learnt from this trip? Siva says he gained confidence in life. It takes immense courage to travel alone. He also learned to connect with people, especially to total strangers. The trip turned out to be an excellent money management lesson for him. He literally managed on an average of Rs 400 a day. Siva also says that he learned how to stay calm in extremely tough situations and handle failure, disappointments and betrayals.

He will be attending the travelers meet at Ooty this month-end where he will be sharing all his experiences with his fellow travelers. He encourages people to travel. “Don’t be afraid to travel and explore,” he says. “Our country is very beautiful and people are different from the usual perception painted of them. This is what I have learnt in the last 200 days of travel.”