Sai Teja is no yogi but he did surrender to the unknown power behind the universe and found that the power is indeed there to help him complete a journey just as Paramahamsa Yogananda described in The Autobiography of a Yogi. Here’s how Sai Teja did it. He set off on a cross country cycling trip to see if he could make it with no money in his pocket and depend only on people’s random goodwill. He found there was plenty of goodwill among people.

“Believe me, it is not that scary,” says Sai Teja on the other end of the phone when I asked him about his solo cycling trip across India. On Saturday, the 26-year-old from Bengaluru concluded his 56-days cycling expedition in Tamil Nadu and was cooling his heels at Chennai. The purpose of his expedition was to see if miracles would happen in real life. They did – in the form of goodness among people and society at large.

The purpose of his expedition was to see if miracles would happen in real life. They did – in the form of goodness among people and society at large

Sai Teja drew inspiration for this one or one-and-half year trip after his hitchhiking expedition to Nepal in 2018. “Hitchhiking is a popular concept in the West. My friend and I took a hitchhiking trip to Tilicho Lake in Nepal. We traveled in different vehicles and we were almost there. But the inclement weather stopped us from reaching Tilicho. The local people and authorities did not allow us,” he recalled.

The trip was a revelation to Teja. “I did have some bad experiences but on a scale, I would weigh 8:2 in which 8 is good experiences. We were fed and taken care off by totally strange people,” he quipped.

Sai Teja returned promising himself to take up another journey but COVID19 struck. After almost two years, Teja is back on the roads, cycling this time. His second-hand Montra rock 1.0 bicycle is loaded with a tent, a small cylinder and the cooking wear and other accessories. He rides 120 kilometers per day on the plains while clocking 50 to 60 kilometers on hilly terrains. On the rear of the cycle, he has stuck a board, Sanyasi on Savari. Starting from Bengaluru on Oct. 2, he took the Mandya route to enter Tamil Nadu via Ooty. He visited Coimbatore, Pollachi, Madurai, Kanyakumari and returned via the East Coast Road visiting Tuticorin, Rameswaram, Thanjavur, Kumbakonam and reached Chennai on Nov. 26.

Well, has he collected any miracles on this trip? “Yes, I have,” Teja sounds very convinced. “A few days back, a random person gave me Rs 1200 after a brief interaction. I desperately needed the money since I ran out of cash. He was not even willing to reveal his name. He told me he was happy to support me in the little way he can,” the cyclist stated.

Teja funds his expedition by selling face masks. He buys them in bulk and sells them on the way for Rs 5 each. As the COVID19 scare wanes, there are no takers for the masks. So, he is planning to make some tea and sell it for cash. “Many wouldn’t even need a mask but they would give me Rs 100 or 50 for one. They insist I take it. I have met benevolent people who would share food and accommodate me for a night’s stay. If not miracles, what else do I call them?” Teja asked. 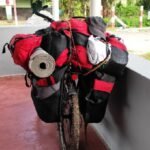 He also reasoned out the logic behind this benevolence. Deep down, everyone wants to travel but they can’t. The urge to travel and explore is mired in multiple commitments. And, the fear of the unknown – say people or places – scares them. “They are happy to see someone else doing it. They see a fragment of them in a traveler like me,” he added.

Deep down, everyone wants to travel but they can’t. The urge to travel and explore is mired in multiple commitments. And, the fear of the unknown – say people or places – scares them

And, we quickly remembered the crystal merchant from Paul Coelho’s The Alchemist. The crystal merchant in the novel runs a shop on top of the hill at Tangier. He keeps planning to take out a pilgrimage to Mecca but he is too afraid. He feels that his purpose of living would cease once he completes it. He is a benevolent man who helps Santiago, the protagonist of the novel. “I have started reading it and realized there are many crystal merchants out there,” Teja added.

He is heading to Andhra Pradesh from Chennai. Sai Teja is optimistic that more miracles await him.