Velmurugan is a busy man. The 27-year-old is a senior software engineer at Trimble, an IT company in Tidel Park, Chennai. But he never fails to return on weekends to his humble hometown of Avarapakkam in Tindivanam district. Driven by a desire to give back to the land in which he grew up, the conscientious young man began doing his bit. He gathered volunteers and cleaned up a lake in the area, which has since turned into a hangout for the town’s residents.

Seen as a changemaker of sorts in his hometown, Velmurugan who came up the hard way, acted as a catalyst for change. He galvanised the residents into joining him in taking care of their water bodies and becoming more environmentally conscious.

His efforts are a testament to how even a common man from a humble background can make a difference. Many people would be able to appreciate this youngster’s life story of growing up and out of poverty through hard work and determination. Velmurugan is seen with his parents Arulpragasam and Aandal

Velmurugan’s father Arulpragasam used to cycle around the villages selling clothes. His mother Aandal is a homemaker. They never studied beyond primary school but were determined to educate their children. The family however struggled to make ends meet.

Velmurugan studied in Nagammal Middle School at Rosanai in Tindivanam. One of the reasons he went to that school was because schooling was free and they provided free midday meals and uniforms at no cost.

He later joined the National Higher Secondary School in Tindivanam after middle school, and managed to shine in his class 10 exams, scoring 454 out of 500 marks. While the top scorers moved to other schools, he could not afford to do so. He continued in the same school that would teach him, feed him and clothe him at no charge.

Velmurugan who came up the hard way, acted as a catalyst to change in his small hometown. He galvanised the residents into joining him in taking care of their water bodies and becoming more environmentally conscious.

Velmurugan knew the value of labour early on. On the weekends, he used to sell clothes at the Sunday market in Puducherry, where a day’s toil would fetch him a small sum of Rs 300. He would use the money for the education expenses that could not be covered by his school. 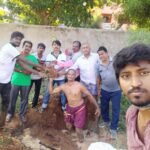 Volunteers of Namma Pasumai Tindivanam along with Velmurugan plant a sapling.

Yet, Velmurugan was as determined as before.Never having had the means to join tuition classes, Velmurugan paid utmost attention during class hours, determined to lift himself and his family out of poverty through his education. And sure enough, he scored an impressive 1101 marks out of 1200 marks in class 12 and became the school topper.

Although his high cut-off mark of 191 ensured that he would get placements in many top engineering colleges, they were beyond his family’s means. It’s Velmurugan’s father’s words that kept his spirits up in those circumstances. Arulpragasam told his son that the institution would not matter for a studious person. So Velmurugan chose to do his BE Computer Science in a college in Tindivanam district itself—the Anna University College.

While the fee was nominal at Rs 7,000, it was beyond what his family could afford. Velmurugan says his teacher helped find the funds for his education. “Professor Kalyani from our village introduced Agaram foundation and their work to me. They helped me get an education loan from a nationalized bank,” says the young man.

He even bagged the annual scholarship of Rs 3,000 for most backward communities, which took care of his commute to the college. After college hours, Velmurugan’s friends would drop him back at his village. But engineering proved to be a tough nut to crack for the boy who studied in Tamil medium. He could score only 60 % in the first semester.

The young techie’s efforts are a testament to how even a common man from a humble background can make a difference.

His hard work paid off and in the seventh semester, he became the topper in his department. When he completed his studies, Velmurugan outshone the others as the gold medalist in Computer Science. It’s no surprise then that job offers came pouring his way during campus interviews.

In 2015, he joined Urjanet in Tidel Park. He worked there three years and paid off his education loan during that time. Velmurugan then worked briefly at Amazon before moving to Trimble. 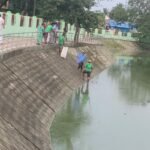 Rajankulam Lake being cleaned up as part of efforts begun by young techie Velmurugan.

While working in the big city on weekdays, Velmurugan always made it a point to return to his village on the weekends. A youngster with a sense of community, he took note of the poor condition of the water bodies in his village and wanted to do something about it.

When he began enquiries, he was informed that only associations would be allowed to work on water bodies. And that’s how he started the Namma Pasumai Tindivanam with the support of other youngsters from his village.

There were seven lakes in Tindivanam in need of restoration. Namma Pasumai Tindivanam started desilting one, Rajankulam, with the help of some youngsters. Once the volunteers began showing enthusiasm for the work, the local authorities also pitched in. Rajankulam was desilted and restored by youngsters and older people alike. Their efforts truly rejuvenated the lake and turned into a hangout.

Namma Pasumai Tindivanam, which has many volunteers now, maintains the water body. Besides, they have also planted more than 5,000 tree saplings across the town. After Rajankulam, they have now begun focusing their efforts on rejuvenating the other six water bodies in the town, says Velmurugan. “We have many like-minded people with us. We also sensitize people to take care of the water bodies which are our lifeline,” he adds. 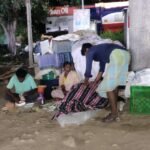 The youngster is seen distributing relief during Covid-19 lockdown

Apart from the green initiatives, Velmurugan has also been doing social work. During the Covid-19 lockdown, the association mobilized supplies for 2,000 poor families. Velmurugan also referred two poor students from his old school to Agaram foundation. What’s more, he has also joined hands with organizations that feed destitute people on the road side.

Now, this young techie is not just busy with his job but is actively engaged in doing something good for the people of his hometown.  “I want to give something back to society,” the youngster says.