The spectacle of a saffron-clad Prime Minister Narendra Modi immersing fully in the Ganga in a ceremonial Varanasi ghat on Monday, keeping just a ‘kalasam’ above the water, has turned Chennai’s attention to lost rivers.

Although a lot of money has gone into the Ganga rejuvenation plan under Namami Gange and earlier the UPA’s Mission Clean Ganga, to immerse fully in the river’s waters is a brave effort, given the many reports of severe pollution in several reaches. Mr. Modi’s high-profile dip could have been spurred partly by some of the encouraging test data for some locations.

Mr. Modi’s high-profile dip could have been spurred partly by some of the encouraging test data for some locations

A recent report on the Ganga’s water quality issued by the Union government for January to May 2021, says this on one important metric for assessment: the presence of coliform organisms (usually from domestic sewage) is down to 800 MPN/100 ml (which stands for Most Probable Number) at an upstream river site in Varanasi, while the level accepted by the Central Pollution Control Board is 2,500 MPN. Of course, at another downstream site, Malviya Bridge, the same river harbours a faecal coliform level of 11,000 MPN.

For those who live in India’s ‘healthcare capital,’ Chennai, the fervour and colours beamed from Varanasi, together with the unfazed Ganga dip by the Prime Minister, revives angst over the misery of the Cooum and the Adyar rivers which rise only during a flood and otherwise ebb into multi-kilometre decrepitude, functioning as open sewers that ultimately dump toxins into the sea.

There have been many attempts to change the face of the Cooum and also the Adyar over time. When B.B. Sundaresan, an environmental scientist, became the Vice-Chancellor of Madras University in 1984, he formally launched an initiative that sought a contribution of a rupee each from people to build a corpus to transform the much-maligned Cooum. Evidently, it did not go very far, and was followed by other initiatives. In 2019, Mr. Banwarilal Purohit as Governor donned gloves to clean trash from near Napier Bridge, to launch a programme by the National Disaster Response Force (NDRF).

Yet, as jaded residents of Chennai and legions of visitors to the city know, neither periodic drives nor activist litigation has been able to change the image or health of the city’s rivers.

When B.B. Sundaresan, an environmental scientist, became the Vice-Chancellor of Madras University in 1984, he formally launched an initiative that sought a contribution of a rupee each from people to build a corpus to transform the much-maligned Cooum.

In fact, the National Green Tribunal has been getting quarterly reports from the Tamil Nadu government since 2019 on what it has done to clean up the Cooum and Adyar. Through the decades, independent scientists have been researching the quality of water in Chennai’s rivers, coming across shocking findings on pollution from metals including arsenic, lead and mercury, presence of bacteria that are resistant to pollution, and, in the Cooum which travels considerable distances through built-up areas, disease-causing bacteria at many points. There is concern for groundwater in areas that are along the Adyar river.

The State government reports filed with the NGT speak of a great resolve – the present Chief Minister, M.K. Stalin gave the DMK government 10 years in 2009 as the then Deputy Chief Minister for a full restoration of the Cooum – but things have remained as static as the stagnant waters in the river.

An informed report on how the Integrated Cooum River Eco Restoration Project has fared  during the 2021 flood after expensive works by PWD, Greater Chennai Corporation, Chennai Metrowater and the Directorate of Town Panchayats is not yet available. Meanwhile, the Chennai River Restoration Trust (CRRT) continues to coordinate the inter-departmental plans. 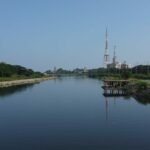 The State has told the NGT that the PWD desilted, built a baby channel for flow, Greater Chennai Corporation removed the city’s garbage and demolition waste from the river system, installed eight trash booms to contain fresh solid waste from blocking the flow of water and fencing, and the DTP cleared accumulated trash in Thiruverkadu Municipality. These need to be audited to determine how effective the measures have been.

Metrowater’s Sewage Treatment Plants valued at Rs.33 crore to stop the persistent fouling of the Cooum have made mixed progress, with commissioning dates for STPs in Chetpet, Nungambakkam and Maduravoyal remaining unclear, while the bigger treatment plant at Lang’s Garden now seems feasible only in 2022.

The vagaries of the Cooum and the Adyar, and their associated water channels, the Buckingham Canal, Otteri Nullah and the Captain Cotton Canal, all of which should have handsomely served the city during the recent floods along with wetlands and smaller urban canals, once again pose the Homeric question: Is the idea of cleaning Chennai’s rivers just a Sisyphean struggle?

Having embarked on a green path, with an avowed focus on the environment and on climate change, Chief Minister Stalin can assign government agencies responsibilities with deadlines.

Of course, the DMK government under M.K. Stalin faces the broader environmental challenge of adapting to climate change, preparing alternatingly for drought or flood, greening cities and making farming sustainable and planning sustainable urban sites with water security. Cleaning the city’s rivers is not extraneous to these goals, and in fact is intricately linked to broader climate objectives.

Having embarked on a green path, with an avowed focus on the environment and on climate change, Chief Minister Stalin can assign government agencies responsibilities with deadlines. One of them could be to ensure environmental flows into the Cooum and Adyar, through improvements to channels and reservoir storage capacities. The rivers are suffering because urban development lost the plot on affordable rental housing in the core city, thus creating riverside encroachments and did not install appropriate sewer systems for suburbs. Cities and towns including Chennai have failed to tackle solid waste management and the plastic question and set a low bar on pollution in general.

More than a decade ago, Stalin visited Singapore to look at a river clean-up. What he needs to do is remove the policy gaps that have become the outfalls for pollutants streaming into Chennai’s river systems.