The problem of fake vaccine certificates

‘Even as central and state governments push for vaccination, many continue to resist vaccinating themselves. Some ask why they are being compelled and say that the choice should be left to the individual. Governments say one should get the vaccine to prevent infecting others, and exercising choice is dangerous for society. In other words, vaccination is a social obligation. Even as the fast spreading Omicron emboldens vaccine deniers, complaints about fake vaccination certificates being given are also emerging.

Dr GR Ravindranath of Doctors Association of Social Equality, while advocating the use of vaccines, says that some are still fearful of taking the vaccine. Because of the push to achieve targets in vaccination, some healthcare staff provide fake certificates to those who come and ask for it but are afraid of taking the vaccine. Ravindranath, however, asserts this in no way justifies giving fake certificates.

Poonkumaran, who practices traditional medicine in Karaikudi, says it is a Constitutional right that we can follow whatever medicine system we like. He says vaccines have been unable to prevent infection and now boosters are being given. Poonkumaran adds compelling anyone to take vaccines under these circumstances is wrong.

The government healthcare system includes all systems of medicines but the government has not helped those who follow alternate systems in Corona.

The government healthcare system includes all systems of medicines but the government has not helped those who follow alternate systems. While the government keeps saying that it is not compelling people when it comes to deposing in courts, it asks for proof of vaccination when people go to cinema theatres and suburban trains.

Nandini, a Siddha doctor, says the government has to declare that vaccination will prevent infection and that there would be no side effects. Only then it can possibly ask everyone to vaccinate themselves.

K Prema has been campaigning against the vaccine. She points to official figures relating to adverse effects following immunization, adding there were 671 of these between January 16 to March 29. There were 180 deaths and these were those that came as complaints to the committee that monitors the adverse effects. The deaths happened within three days of vaccination, she says. What is the official conclusion on these complaints? she asks.

The best way would have been for the vaccine deniers to declare in an affidavit. This would have meant nobody was forced to try for a fake certificate. 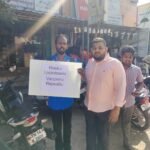 Meanwhile, a slogan ‘Mask Lockdown Vaccine Repeat’ is gaining popularity among the vaccine deniers. They used the slogan during a protest in Seerkazhi recently. The slogan finds inspiration from a punchline in Simbu’s recent movie Manadu, ‘Vanthan Suttan Sethan – Repeatu’.

The placard was tweeted by a Mumbai-based advocate appearing for a case against the vaccine mandate in Bombay High Court. Vaccine deniers say that needless pressure to vaccinate all drives this entire operation of forged vaccine certificates. A relaxation for the people not willing to take vaccines will solve this issue, they say.