Pandarampatti villagers take out processions for weddings and temple festivals. This time they took a green carpet in a procession on the streets of the village. It was a proud moment and they wanted to celebrate the new carpet being put in the classrooms of their village primary school.

Seven years ago, this government-aided school was on the verge of shutdown. The building was falling apart and the campus looked decrepit. There were seven students in all, one in the class that headmaster Nelson Ponraj taught. Today, there are more than 80 students in the school which competes with private schools. The credit goes to Nelson Ponraj for his dedication and selfless service in turning it around.

The Thoothukudi-Nazareth Diocese Trust school is some 100 years old and was started during British rule in 1915. Though started as a religious school, it became a regular school and was aided by government. Just as it was fading into history, Nelson Ponraj started working here. 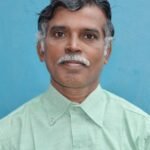 A resident of Pudukottai village, some 15 km from Thoothukudi, Nelson Ponraj studied to be a teacher and started working in 1992 at a salary of Rs 300.

In 2012, Ponraj started teaching at a higher secondary school in Koottampuli. From there he was posted as headmaster at Sethinganallur Primary School where he would commute 90km every day to go to school from Pudukottai. Supported by local activist Muthalamkurichi Kamaraj, he would go to Dalit households to teach children in their homes. Taking note of his sincerity and service mind, the diocese trust transferred him to the primary school in Pandarampatti with a view to revive the school.

Ponraj went door to door asking villagers to send their children to school. Since most of the parents – husband and wife – were daily wage workers, there was no one to take care of the children at home. Since they didn’t get proper food and clothes, Ponraj thought of a plan. He provided new clothes to the seven students. He would take them to restaurants once a week and have them eat to their heart’s content. Ponraj arranged to celebrate annual day for the seven students. In the annual day celebrations, he had the seven children act in a play he wrote. He then recorded it and showed the video to villagers. He took the students on excursions, too.

Supported by local activist Muthalamkurichi Kamaraj, he would go to Dalit households to teach children in their homes.

Villagers’ attitude started changing slowly as they saw the students doing well in studies as well as developing their personality and skills. Next year, the student strength tripled.

Nelson Ponraj is not just a teacher but a friend to the children studying in his school. Today, there are 81 students studying there. When Nelson Ponraj assumed charge, the school had seven students and a dilapidated building.

Next, Ponraj turned his attention to the school building. There was one classroom for all classes. If it rained, water would seep in through the leaky tiles and flood the room.

Ponraj made a presentation to the trust and they provided him Rs 1 lakh. But some Rs 17 lakh was needed to renovate the entire building. Ponraj mobilized nearly Rs 10 lakh from villagers and philanthropists and well-wishers.

The school renovation was completed during the lockdown. Though schools were not functioning, teachers were given salaries. Since Ponraj was drawing a salary without teaching, he decided he would spend his salary on renovating the bathrooms and a modern kitchen. These were inaugurated recently.

Ponraj created a smart classroom with a projector so children could have audio-visual aids for learning. This cost Rs 1 lakh.

Ponraj felt one teacher was not enough for 81 students. He decided to recruit three more teachers and pay their salaries from his personal funds. Today there are five teachers including Ponraj.

After boosting enrollment, renovating the building and employing more teachers, Ponraj turned his attention to the background of parents. They were mostly from below poverty line and the students could only wear the uniforms given by the government. He gave money to those who could not buy uniforms. He would take children who could not afford to buy new clothes during their birthday to get them new clothes. Ponraj spends his money to provide more vegetables for noon meals so children eat good food here even if they cannot afford good food at home.

Ponraj felt one teacher was not enough for 81 students. He decided to recruit three more teachers and pay their salaries from his personal funds. Today there are five teachers including Ponraj.

During lockdown, online classes were happening. But Ponraj saw that students were getting distracted and online learning was not effective. He and his fellow teachers went to each home to teach children. This method has now been taken up by the government. His efforts ensured students did not feel their classes had been disrupted. 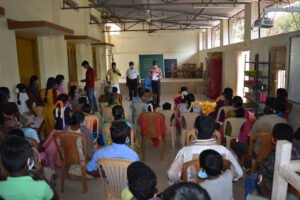 Ponraj teaches in playway method for math. Children who pass out of his school and go elsewhere for higher classes come to his school after school hours so they could learn from him. Slow learners too stay back for extra coaching from him.

In addition to curriculum, Ponraj has arranged to teach silambattam as well as train students in volleyball.

Ponraj ‘s wife is also a teacher. He has three daughters. He has helped three boys from the college study engineering.