Vaccine fear: Why TN could breed mutations like Omicron

Experts have noted that Omicron carries 30 mutations of the SARS-CoV-2 virus genome. They say that current vaccines may not prevent Omicron infection although there is every chance vaccinated individuals would be able to fight the infection better. For this reason, the high levels of vaccine hesitancy and denial being seen in Tamil Nadu may not only increase the impact of a potential Omicron infection but also make the state a breeding ground for such similar mutations.

Virologist Dr Pavithra Venkatagopalan says the goal of vaccination is not just to stop the spread but also to reduce the severity of the disease when asked about the fear of Omicron infecting the fully vaccinated. She said incomplete vaccination such as in southern Africa is one of the primary reasons for mutants like Omicron to arrive. “The more we allow the virus to replicate, the more mutations would happen. Vaccination essentially reduces the amount of viruses that could replicate. The longer we have vaccine hesitancy, the greater the problem we have in the future either from this mutant or other mutants,” she warned.

Virologist Dr Pavithra Venkatagopalan: “The more we allow the virus to replicate, the more mutations would happen. Vaccination essentially reduces the amount of viruses that could replicate.”

Vaccine hesitancy and denial are prominent in Tamil Nadu, says a survey conducted by a group of researchers from BMC Health Services Research. This is an open access, peer-reviewed journal that considers articles on all aspects of health services research.

The study ‘Attitude towards COVID19 vaccines and vaccine hesitancy in urban and rural communities in Tamil Nadu, India – a community-based survey’ published in this journal in September 2021 estimates 40.7 percent of vaccine hesitancy in Tamil Nadu. The researchers arrived at this figure after surveying 564 persons from urban and rural backgrounds.

Meanwhile, the paper ‘COVID19 vaccination hesitancy in India: State of the nation and priorities for research’ published in Elsevier’s Science Direct in December of 2021 reported 29%  to 39 % vaccine hesitancy among Indians at the beginning of 2021. Elsevier’s paper cites BMC Health Services Research paper for Tamil Nadu. The pan-India study surveyed 1,638 participants from 27 states and union territories.

The BMC Health Services Research paper puts vaccine deniers’ proportion at 19.5 % in Tamil Nadu. Youngsters, women, rural residents and labourers from low-income groups are more distrusting of the vaccine. Elsevier’s study paper states 12.7 % of Indians are not ready to take vaccines, attributing this to a longitudinal study from January to June 2021.

Youngsters, women, rural residents and labourers from low-income groups are more distrusting of the vaccine 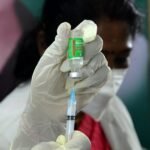 Vaccine hesitancy is the delay in accepting the vaccines or refusing them though they are available while vaccine denial is disbelief in the effect of vaccines. “I have no intention of taking a vaccine at any cost,” Arun (name changed) from southern part of Tamil Nadu stressed. Arun, in his late 20s, reasons that vaccines are meant for vulnerable people like those who are immunity compromised and vaccinating everyone is mere fear-mongering and benefitting only the vaccine makers.

Arun says his brother and sister-in-law started showing signs of frequent infections and weakness after taking two doses of vaccination. “There is something fishy in this entire campaign of forcing everyone to vaccinate. Someone is conspiring on a large scale,” he adds.

Some in the state may have taken the vaccine due to work or other reasons but regret their decision. “I had no intention of taking a jab. But my company forced me to get fully vaccinated. I am not at all happy about being vaccinated,” says Raghu (name changed) from Madurai. “Vaccine is nothing but poisoning of our blood. The body should produce its immunity. Vaccines cripple this natural ability of the human body to fight the disease,” Raghu reasoned.

Arun and Raghu are examples of the level of distrust in Tamil Nadu which is known for its literacy, advanced health indices, and improved socio-economic conditions. Some parents in the state are not even ready to send their wards to school since schools demand full vaccination of both parents.

Vaccine hesitancy or denial was brewing in Tamil Nadu before COVID19. The BMC Health Services Research study warns that vaccine hesitancy to routine childhood vaccines in Tamil Nadu showed an upward trend even before the COVID19 pandemic. The consecutive national family health surveys are showing a declining trend of vaccine coverage in Tamil Nadu though the state is performing higher in all other health indicators.

Tamil Nadu Health Minister Ma Subramanian on Nov. 25 said that 76.23 % of the eligible population were administered the first dose of vaccine while 40.31 % were administered the second dose. As per COWIN dashboard, 4.53 crore people have taken the first dose in Tamil Nadu while 2.47 crore have taken their second jab. The state has to work on vaccine hesitancy factors to achieve complete vaccination.

Health System Expert, Dr Sundararaman, former director of National Health System Resources Centre, says lack of vaccine coverage could turn out to be a problem going forward. Tamil Nadu is good at administration but community interaction is a challenge. Village level interaction with health workers is not adequate. Besides, the quick phase of urbanization in the state is weakening village local bodies. Community interactions are rather weak in urban local bodies and such weak interactions could lead to lack of awareness, he said. The state government should take out a community interaction initiative at all levels to allay the fear of vaccines, he said. Vaccine coverage should be maximized to tackle new mutants, he added.

Dr Sundararaman, former director of National Health System Resources Centre: “Community interactions are rather weak in urban local bodies and such weak interactions could lead to lack of vaccine awareness”

The medical fraternity says that it is too early to conclude the adverse effects of the new mutant Omicron. But refusing vaccines would have its repercussions, they warn. Dr. Farook Abdulla, health expert and Chief Medical Officer of Ilayangudi Govt Hospital, warned that people with vaccine denial and hesitancy would get severe disease and land up in ICUs if they were not infected with Covid19 in earlier waves. But he is optimistic that the situation would not go to the extreme of choking the state’s health system if another wave comes.