There was no flood in Chennai, only stagnant rainwater : Expert

Statistics show that the number of areas that get flooded in Chennai during rains has increased several times over the years. This shows that the problem is only mounting.

Can floods be prevented? Are there solutions? Water expert and retired professor at Madras Institute of Development Studies, S Janakarajan, gives his take. 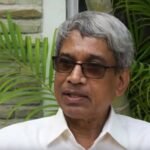 “It is wrong to call stagnant rainwater as flood. What Chennai experienced this time was not a flood but rather just rainwater that collected in residential areas. For instance, in the core city, rainwater stagnated in T Nagar Usman Road, West Mambalam, Pulianthope and Kotturpuram low lying areas. It is only natural that rainwater stagnates in areas that are low lying.

In 2015, Chennai was flooded due to heavy rains. Floods in rivers inundated the city. This time, however, it was largely rainwater stagnating in low lying areas. But what is worrying is that the number of such areas has been increasing over the years.

In most places, houses are at a lower level compared to roads. If water is attempted to be let out through pipes, then it will naturally flow back in. In most places, the soil has been covered up by concrete.

In the name of Smart City, the Mambalam canal that was 20 feet in width has been reduced to 10 feet. There are 16 canals in the city including Mambalam canal. Some of them have disappeared, many have silted up, while others have been encroached upon.

There are 16 canals in the city including Mambalam canal. Some of them have disappeared, many have silted up, while others have been encroached upon

Floods have happened wherever canals used to be. The Virugambakkam canal has vanished. The surplus channel of Vyasarpadi is not to be seen now. Kodungaiyur canal has disappeared so has Velachery canal. Pallikaranai-Narayanapuram lake has been encroached.

We have failed so far in preserving in waterbodies. So, what can we do going forward?

Here are some long-term solutions. We have to deepen all the existing waterbodies as much as possible. Adyar, Cooum, Kosasthalaiyar and Arani rivers should be restored to their original condition. Buckingham Canal should also be restored, deepened and widened. If we can ensure a smooth passage for water, there is no question of flooding. Stormater drains should be cleaned and made functional as intended.

Sholavaram, Puzhal, Chembarambakkam, Poondi and Manimangalam reservoirs should be deepened as much as possible. There are some 30 lakes along East Coast Road. They can be deepened so they can take in rainwater.

Due to climate change, it is likely that we will face more such storms and cyclones with heavy rains in the future. As a precaution, we have to act now to restore waterbodies. We should identify all the low lying areas where rainwater was stagnating and create permanent mechanisms to take the water from there to nearby canals, lakes and so on. Pumping water is not a long-term solution.