Act up Chennai! This year rain will be the norm in future

At some Rs 15,000 a square foot, Chennai’s commons, including its lakes, are worth more dead than alive to a large number of speculators. The cost of this avarice has once again been brought home sharply by this year’s monsoon.

The rise of high value speculative real estate has led to the steady loss of urban wetlands, although the decline began decades ago as politicians appropriated what was left behind by the colonisers. The city now has ‘Lake view’ roads which are found in many localities but no lakes to take in water. Nungambakkam has a lake area but no lake. The story is the same in Mambalam. This phenomenon has spread to the suburbs in recent years. Ambattur tank showed a three-fourths decline a decade ago. Others that suffered losses are Kodungaiyur and Villivakkam.

Residents in other areas are having to fight to retain those lakes that remain – such as Chitlapakkam and Madambakkam. Monsoon 2021 has driven home, again, the point that the socialized losses of vanished lakes will be hard to absorb in a difficult Covid-19 year. People just don’t have the money.

In fact, it should not have been difficult to plan for Chennai’s heavy rainfall because it has always been swinging between extremes and this year is not the worst. In one study covering 1965 to 2012 it was seen that in 38 years, average annual rainfall in Poondi, Red Hills and Sholavaram water sources exceeded 1,000 mm. During six years it was over 1,600 millimetres (Janakarajan). Extreme rainfall of over 200 mm in a day is expected to become more frequent.

Chennai floods have upset high personages sometimes. In the mid-1980s MGR, the Chief Minister, shifted to a star hotel off Anna Salai because of flooding around his suburban, riverside residence.

Preparing for heavy rainfall should have been an inspiring challenge for governments. Restoring open lakes, creating new artificial wetlands, removing the sclerosis affecting canals like the Buckingham canal, Mambalam canal, and others like Virugambakkam, and creating links with some of the large suburban lakes, just like the iconic ones in Holland, should have enthused the rulers. The problem is that this would not conform to a 5-year electoral cycle. 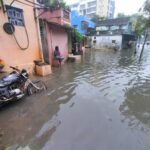 Last year, in 2020, when Covid-19 was still a big worry, the AIADMK government declared open the Kandigai reservoir in Thiruvallur to feed the Poondi system, and it had filled up by March 2021. It was an extra source for the city, but not really designed as a flood carrier.

But on the other hand, the city’s big historical sponge, Pallikaranai marsh, close to the sea, has been allowed by both the AIADMK and the DMK governments to be encroached gradually. So, from 6,000 ha it is now perhaps 600 ha since 90% is estimated to have been lost to encroachments.

Chennai now has to decide where future floodwaters will flow.

Chennai now has to decide where future floodwaters will flow. It needs to reclaim every inch of urban lake space, every temple tank, as a resource and choose suitable poromboke lands to be repurposed as urban wetlands.

Check how the Dutch have dealt with their own excess water problem. As a country in which the major part is below sea level they have adopted innovative solutions to keep the water out and their feet dry.

In Rotterdam, for instance, the local government has created deep, paved surfaces in the city centre which act as play areas in summer and water storage locations when it rains. There may be something in this model for Chennai and other Indian cities.

Chennai has many degraded areas that can be turned into wetlands. It may be possible to acquire others. If large houses with gardens can be identified and acquired they can become small city lakes for local recharge and to hold flood water.

If garbage dumping in Perungudi and Kodungaiyur can be completely stopped, these reclaimed lands will take in much flood water. Experts’ suggestions on using Buckingham canal to flow water South, possibly using active pumping, awaits action.

Chennai has many degraded areas that can be turned into wetlands. It may be possible to acquire others. If large houses with gardens can be identified and acquired they can become small city lakes for local recharge and to hold flood water.

But what is certain is a speculative housing and commercial development cannot be allowed to eat into more of Chennai suburban flood plains and lakes. People are being sold property using deceptive advertising, something that a flood mapping of residential of residential areas will make all too clear. Will the government produce a map of the 2021 flood for public view?

In the era of climate change, the life of Chennai’s commons is too valuable to be left to the vagaries of speculation. Choking what is left of water absorbing lakes and urban wetlands will leave Tamil Nadu’s capital a floating, dysfunctional mess each monsoon.