Chennai is already flooded even before North East monsoon gains momentum. For all the town planning and civic amenities projects undertaken by the government round the year and the lessons learnt in Chennai floods 2015, the city should be geared up to face rain related adversities. But it is not. Chennai is drowning even before cyclone/depression has set in because we have not constructed our Storm Water Drainage right. 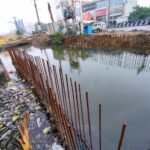 All Storm water Drains (SWD) are to be properly connected to nearby rivers and canals such as Cooum, Adayar, Buckingham Canal, Otteri Nalla, Cotton Canal etc… in order to drain the flood waters within an hour or two automatically by gravity. But this has not happened. The drains have not been properly designed. Our SWD dead ends are not all connected to water bodies.

The drains have not been properly designed. Our SWD dead ends are not all connected to water bodies.

The gradient for the storm water to drain has not been provided at all. Wherever gravity flow is not possible, small pumping stations in various parts of Chennai City should be established considering the flood contour line drawings prepared by Er K Ramalingam of CMDA Nucleus Cell in 1980.

The Chennai Metropolitan Development Authority (CMDA) must urgently engage sufficient field engineers, at least one for every division, to monitor the construction of multi-storey buildings so as to prevent the blocking of drainage lines and water courses which has caused the current temporary flood havoc. This is very important because many multi-storeyed buildings have been constructed casually violating all norms and deviating from approved plans.

It is high time that GCC – Storm Waters Branch changed the storm water design by adopting precast reinforced circular pipes (say NP2 & NP3 class pipes) from rectangular flat sections so as to ensure that storm water easily flows by gravity. This design has less project cost, too, and can be executed in a shorter period. The civic authorities must install or establish mini Tunnel Reservoirs of 0.1 or 0.05 TMC capacity at important locations in the Chennai City so as to drain out flood waters and subsequently to recycle the same for other uses. Storm Water Drains are a civic amenity provided in major cities, towns and other places along the sides of streets/roads for collecting and transporting rain water to the nearby canals/rivers or streams. This would facilitate easy movement of people and vehicles.

Storm Water Drains are a civic amenity provided in major cities, towns and other places along the sides of streets/roads for collecting and transporting rain water to the nearby canals/rivers or streams. This would facilitate easy movement of people and vehicles.

However our engineers attached with local bodies still adopt conventional materials and technology for the construction of storm water drains, causing enormous hardships to the people. Cost of construction is high, too.

Earthwork excavation, collection of broken stone, sand, rectangular section with side brick masonry walls and laying of in-situ-concrete for cover slab without proper curing has resulted in poor quality system and longer construction time. With the shape used currently, removal of silt and debris becomes difficult and prevents the free flow of storm water inside.

In order to reduce construction time and hardships as well as to improve quality of work, precast RC Concrete pipes – 600mm to 900mm dia – NP2 class had been suggested for this task. If RC pipes are used, laying of pipelines, quality, required slope for easy flow of rainwater and considerable reduction in completion time can be achieved. Construction cost is lower. RC wall maintenance cost will be minimal and greater durability can be ensured.

Below are the cost and project schedule for the three designs. RM is running metre, a standard used in such applications. A Modified Storm Water Drain design with RC Concrete Pipes (NP 2 Class) was suggested to the Chennai Corporation by a research scholar as early as 2010. But it was not accepted, nor implemented for reasons best known to the civic body.

Dear Gagan Deep Singh Bedi sir, we appreciate your earnest efforts in mitigating the sufferings of Chennai people during these flood times. We, senior engineers and experts from TANSEA, are ready to assist Greater Chennai Corporation and CMDA in this important task.