Animal carcass: Dignity in death applies to wildlife too

Animal carcass formed by wildlife that dies in the deep forests of Karnataka due to natural causes or in fights for territory will now rest there. Those that die closer to human habitations in the fringe areas of the forests will get dignified last rites in the form of a burial or cremation.

The policy change follows a path-breaking report by Dr. Sanjay Gubbi — the nationally acclaimed wildlife scientist —Karnataka government to bring in reforms in animal carcass management in forests, zoological parks, elephant camps, wildlife reserves and other wildlife facilities where animals are in close proximity to humans. 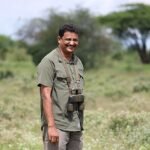 The Forest Department through a government order has directed department officials to be as non-invasive as possible when they find animal carcass in the wild. Earlier the department officials in Tamil Nadu, Kerala and Karnataka used to bury or incinerate remains of wild animals with typical forest department honours, including offering flowers to the dead animal.

“What touched us most was the kind treatment to the animals even when they are dead in the deep forests. Indicating their close bond with the animals they protect, rangers and higher officials would take care that they carry out  the last rites with all the body parts of the animals intact, including tusks, pelts, antlers and tiger nails and keep watch over the burial site for attempts by poachers to exhume the carcass for recovering the body parts,” say conservationists in the densely forested Male Mahadeshwara hills.

“When a big animal dies even in the deep forests we do take care that they are buried with the honours of the Department, like elephants and tigers and even big herbivores. It is our way of showing respect and gratitude to the animals for making our world habitable,” Chief Conservator of Forests, Karnataka, Prakash Natalkar told Inmathi.com

Dr Gubbi’s report has paved the way for a new and deeper understanding of these wild animals and their relation to nature.  Unlike the accepted practice of incinerating the remains of elephants, big cats, herbivores, and other creatures, Dr. Gubbi believes that carcasses are vital to the environment because they supply food for a range of organisms. Carcasses contain a lot of nutrients and provide a lot of food  to scavengers and predators in the forests, his report says.

The change in disposal policy was also influenced by the fact that these carcasses support the natural population of a variety of indigenous vultures, now categorised as Critically Endangered or Endangered by the International Union for the Conservation of Nature (IUCN). 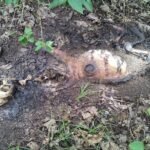 The influence of corpse decomposition on soil and its qualities motivated Dr. Gubbi’s suggestion for a change in wildlife carcass disposal techniques. Animal carcass, according to research, booststhe abundance of bacteria and fungal communities in the soil for up to 40 months, suggesting long-term benefits .

The new policy comes at a time of increased surveillance and protection of the forests on the tri-state confluence of Tamil Nadu-Karnataka-Kerala.

Senior forest official Yadakondala in the Male Mahadeshwara Hills says, “Nobody can enter the forests without our permission. We have a three-tier protection against poaching — firstly the tribal families living inside the forests, secondly our watchers and thirdly our rangers. Even the burial sites are now watched and protected which is why the wildlife trade has been on the low ebb in the tri-state confluence.”

Dr. Gubbi believes that carcasses are vital to the environment because they supply food for a range of organisms. Carcasses contain a lot of nutrients and provide a lot of food  to scavengers and predators in the forests

In the zoological gardens and national parks, dead animals are given their own place to rest. The animal rights activists who visit the zoological parks in Mysuru (Chamarajendra Zoo), Mangaluru (Dr K. Shivarama Karanth -Pilikula wildlife facility) and the Bannerghatta National Park in Bengaluru participate in the last rites of the animals that have charmed thousands of visitors. The zoo authorities confirm that the animals that die of natural causes in the zoological parks all over the country are given last rites with all their body parts intact. They live in captivity within the human habitation and they become a part of society. So close are the ties of these animals with the visitors that the latter often tip off authorities if their favourite animal is under the weather!

A senior official who recently oversaw the burial of an iconic wild elephant with one of the largest tusks among the jumbos in the country, on conditions of anonymity told inmathi.com, “We gave full honours to the elephant and buried it with the tusks in an undisclosed part of the forests of Karnataka.”

An elephant carcass, according to current studies, may enhance nitrogen in the soil upto 1.5 feet from the ground and maintain bacteria and fungal growth for 40 months. The carcasses can also feed hyenas and porcupines as a calcium source.

The Karnataka government in its order has stated that the Forest Department must make sure that the carcasses of animals in deep forests remain untouched and allowed to merge with the soil.