Instead of new recruitment as Tamilnadu government employees, governments have been using contract workers for a long time.

From life saving professions to nurses to others, contract workers are being used extensively by government and are paid contract wages. Frequent announcements are made under various new schemes with attractive names that are essentially contract worker hiring initiatives. Most government projects are executed by contract workers. Yet many people aspire to get government jobs even during studies.

If we analyze the budget figures of government, much of the expenditure goes into meeting salaries, pensions and allowances. People in high positions in government and permanent Tamilnadu government employees are typically the beneficiaries of government largesse. But at the lower end people are likely to be recruited as contract workers only.

People in high positions in government and permanent Tamilnadu government employees are typically the beneficiaries of government largesse. But at the lower end people are likely to be recruited as contract workers only.

Several questions arise regarding the functioning of the government in these circumstances. Is there an audit of the work performed by Tamilnadu government employees who are paid many allowances? Is there a mechanism to decide how many should be on contract and who can be made permanent employees and so on?

Samanvaya, an NGO, is doing research on these. It also provides inputs to other organizations. Director of Samanvaya Ramasubramaniam has the following to say on this topic: 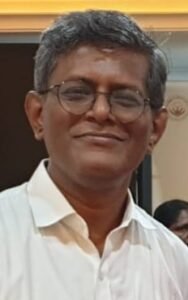 Though there are many agencies to monitor various departments of the government, answers to such questions will not be made available easily by government. In general, there is the impression that the government job is a means to settle down in life, get a good salary, many allowances and so on. Many of life’s needs will be taken care of by joining government service, people think. That’s why thousands of people compete for government jobs. They try to get the backing of ministers and MLAs and get those jobs.

The other question is what are the things the government should do and what should be done by private institutions? In America, even prisons are run by private agencies. In China some of the biggest factories are run directly by the government. These are two ideological poles.

It is not wrong if the US government seeks to profit from prisons. The Chinese government makes much money by selling products made by its people in international markets.

Hawkers on a famed Chennai street: An old tug of war

In today’s situation, we have to answer the question if all the government departments should function. How many departments and agencies are functioning just because at some point people were appointed to positions in them? What are the reasons for not shutting those operations? Why can’t people in non-functional departments be moved to other departments?

In a politics that is not bound by partisan party interests, these are simple questions to address. There is no space for peeves and preferences nor short cut answers. If only looks at this through the lens of the campaigns of particular political parties, such questions are problematic.