So why does the typical communist leader live so long?

What is it about communist leaders and longevity in Tamil Nadu? They may have braved police assault, attacks from enemies, survived on meager allowances and so on. Yet that doesn’t seem to affect their general health.

CPM’s N Sankaraiah has crossed 100 years. CPI’s Nallakannu is nearing 100. V Radhakrishnan, a CPI activist who has been associated with the party organ Janasakthi since its foundation, will turn 101 this June 13.

C S Subramaniam who lived up to 102 years of age was in-charge of Janasakthi between 1942 and 1947 during which period Radhakrishnan started his association with Janasakthi. Subramaniam had gone to England to study but returned a communist. Radhakrishnan, who lives in New Century Colony in Ambattur, is a journalist as well as a translator.

Radhakrishnan was born in Pollachi where famous Communist leader Baladandayudham was born. His father was Vasudevan and mother, Chellammal. In his school days, he participated in the activities of the Congress. At that time he was involved in the Leftist student associations. In 1939, he came first in school in the SSLC exam but couldn’t continue to college because of lack of means. He then worked in the grocer shop of his uncle.

Also Read:
“This MLA was born a commoner, lived like one, and died a commoner”
“Politicos whose books were nationalized” 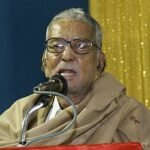 After continuous service at Janasakthi, in 1967, he joined the editorial board of Soviet Palagani magazine and served there for another 23 years. He translated Janasakthi articles to Tamil for the magazine. He has also written a biography of his life in Tamil.

Radhakrishnan was a close associate of Jeevanandam, P Ramamurthy, P Srinivasa Rao, Hanumantha Rao, C S Subramaniam, Mohan Kumarangalam and others. He has translated the speeches of S A Dange, P C Joshi, Ajoy Ghosh and others.

At 16 years of age, Radhakrishnan agitated against the British during the Second World War. When he was 19, he left home and became a full time worker of the Communist party and served in the underground Communist leader Tha Pandian recalls Radhakrishnan translating a Ajoy Ghosh. Standing next to the six-foot tall Ghosh was a puny schoolboyish Radhakrishnan. The microphones had to be set up two different heights for each but there was no variation in content of the translation, Pandian has said.

Radhakrishnan’s long life is not unusual, says C Mahendran, another communist leader. He recalls a psychiatrist telling him that despite facing hardships and leading a poor quality of life many communist leaders lived a long life since they lived their lives for others. It was the reason for their mental health.

Radhakrishnan married Motcham Mary, daughter of another communist, Anthonysamy of Tiruchi. Radhakrishnan knew her through Pappa Umanath. Their daughters Geetha, Santhi and Bharathi all went for intercaste marriages.

Radhakrishnan applied for freedom fighter pension citing the time he spent in jail in 1942. But he went through much difficulty in trying to get the pension in 1982. This is another story altogether.