This MLA was born a commoner, lived like one, and died a commoner.

Marxian philosophy holds that what is unchanging is change itself. But this doesn’t apply to Nanmaran, the 74-year-old CPM leader who died recently. Nanmaran never changed. He was always the down-to-earth person whether he was MLA, party worker or neighbor. His economic conditions were always the same. He was always accessible, ready to talk just like the man on the street.

Nanmaran was often seen getting down a bus coming into Madurai and hopping on to another bus. He was found riding his bicycle on the streets of Madurai. His party, the CPM, had given him a moped that he would sometimes use. Or he would be seen riding pillion on a comrade’s bike.

If there was a public meeting he was going to address as a high level CPM leader or MLA, he would often be found chatting with his comrades over a cup of tea at a tea stall nearby before the meeting would start. Then he would go on stage and hold the audience attention with a pointed political speech laced with humour and anecdotes.

Nanmaran was elected to the Tamil Nadu Assembly in 2001 as well as 2006. Bus conductors would ask for his ticket and he would show his MLA bus pass. And they would look up and down. He was probably the only MLA that travelled on their bus and would remain the only MLA they would ever see on their bus. 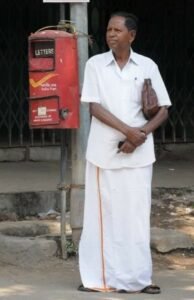 A simple attire and a small bag standing all alone was his persona.

A big house, an SUV and assistants to serve are typically associated with today’s MLA. Nanmaran had none. Until the very end, he lived in a rented house whose rent was paid by his party. If he fell sick, he would go to a government hospital.

Nanmaran was born to a cotton mill worker father in Madurai and was named Ramalingam at birth. In a party where leaders would either drone on about policies and statistics or deliver fire and brimstone speeches, Nanmaran followed the EK Nayanar style. His earthy humour and mild sarcasm were a big hit with listeners. Just as the audience would start tittering as soon as Nayanar got to speak, so would Nanmaran’s audience.

Nanmaran got his spurs in CPM politics as a youth leader. An early agitation he participated in was a protest demanding jobs and unemployment support in Madurai during which he was arrested with 200 other young people. Cases and arrests only continued in his political career.

Nanmaran served as state president of the party youth wing.

Nanmaran’s interventions in the Assembly included his speech on the Uthapuram untouchability wall. He ensured the issue got the attention of chief minister M Karunanidhi and proper action was taken. Though laced with humour, his speeches were always effective and triggered action.

A friend of journalists, he would request them to highlight people’s problems. Honesty, simple living, and service to people: this was Nanmaran’s credo.