Nenjukku Needhi is the contemporary DMK’s stand on caste. It recognizes that caste rules against dalits and oppresses them but unlike recent “dalit films” addresses it from the broader society’s point of view.

Udayanidhi had been acting as a romantic hero when the DMK was in opposition, barring in the movie, Manithan. Now, with the DMK in power, he, seen as the heir to Stalin, has taken on a bold theme of caste politics in Nenjukku Needhi.

An active political role is typically a second career for many of actors in Tamil Nadu. MGR was an exception in the sense that he was in politics and acted in movies simultaneously but his story was intertwined with the growth of the Dravidian movement. Rajini and Kamal have tried to ride the twin horses of politics and movies but without much success. Nenjukku Needhi, named after his grandfather M Karunanidhi’s autobiography, is clear about what image Udayanidhi would like to project to the people of Tamil Nadu. It seeks to shed the image of a fun loving, easygoing scion of a political family. 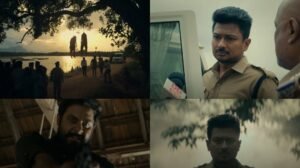 Though Udayanidhi doesn’t quite match up to Ayushmann Khurrana’s acting in the original film, Article 15, his natural style helps Nenjukku Needhi stand on its own legs

Nenjukku Needhi is a film adaptation of the Dravidian idea of social justice. Three child workers ask for higher wages for which the face sexual abuse. Two of them are hanged to death by the oppressive ruling class while the third escapes. It falls to the new assistant commissioner of police to track down the girl and ensure justice is served.

Nenjukku Needhi is a remake of Anubhav Sinha’s Article 15, based on the murder of two dalit girls in 2015 in Uttar Pradesh and starring Ayushmann Khurrana. Though the story is based in a state where ideas of social justice haven’t taken root, Nenjukku Needhi succeeds in its attempt to shift the terrain to Tamil Nadu with a progressive image.

The movie’s director Arunraja Kamaraj has sought to expose how deeply entrenched caste feelings are in Tamil society. It’s the unfinished job of the Dravidian movement, apparently, to address this.

In typical Tamil cinema style, Nenjukku Needhi is sprinkled with punch dialogues that emphasize the seriousness of this issue. Dalits lament that they take up the job of burning the bodies of the upper caste but their own dead are not allowed into the cremation grounds. The hero tells the heroine that he has entered the village since he is seeing a statue of Ambedkar to which she asks him if the statue is in a cage or in the open. Ambedkar statues sometimes need to be protected inside a frame to prevent its defiling by mischief makers in Tamil Nadu villages.

A doctor who performs a post mortem is named Anita, in a reference to the girl Anita who committed suicide since NEET came in the way of her aspirations to become a doctor. The film refers to children refusing to eat the mid-day meals of a dalit cook, which is also a reference to a real life incident.

Udayanidhi may not have matched up to Ayushmann Khurrana but he does bring a naturalness to his performance. Vijayaraghavan, his character, is well etched, so for those who haven’t seen Article 15, Nenjukku Needhi stands on its own legs. Tanya, Ilavarasu, Ramesh Tilak and several others support well. Suresh Chakravarthy gives a standout performance as the obnoxious brahmin cop, Sundaram. Dhibu Ninan Thomas’s background score lifts up the movie.

In typical Tamil cinema style, Nenjukku Needhi is sprinkled with punch dialogues that emphasize the seriousness of the issue of caste in Tamil Nadu

Director Arunraja Kamaraj leaves a mark with Nenjukku Needhi. Though only a remake and without straying too far from the original, the director has taken much care to present NN as original fare.

In Article 15, the lead character is a brahmin but is unaware of the nuances of caste. The original uses the widespread practice in northern India where names of people are indicators of caste to emphasize the pervasiveness of caste in Indian society. In Nenjukku Needhi, Vijayaraghavan’s caste is ambiguous. He is educated abroad and is speaking from the English speaking elite class but is aware that the reality of India has to be experienced in villages, not just read in books.

Vijayaraghavan is clear about where he stands. He says his neutrality does not mean standing in the middle but standing for justice. He says Ambedkar is taken as the leader of a caste-based party and chides the audience that dalits are referred in the same way that animals are addressed in Tamil. In short, Vijayaraghavan, or Udayanidhi, is an honest, brave upholder of social justice.

Nenjukku Needhi does say that caste-based parties representing dalits are opportunistic, in an apparent reference to the DMK’s core belief. But there are no overt symbols or references to the ruling party.

Recent “dalit films” have sought to explode the myth that caste doesn’t rule in today’s society and have taken the vantage point of dalits. Nenjukku Needhi seeks to show that society should be inclusive of dalits.

So far, the roles that Udayanidhi has played have been similar to the roles that Jeeva, Arya and Sivakarthikeyan played. They were mostly aimed at commercial success.

It would be a challenge for Udayanidhi to take up a broad Dravidianist position that doesn’t flinch from facing up to issues. In Nenjukku Needhi, he has done that. It remains to be seen if he will continue doing so in future.