The Amma Canteen that were started in 2013 to provide food to the poor at highly subsidized prices are supporting middle class folk facing a squeeze. It’s common to find people who earn Rs 30,000 a month as well as daily wage earners at the canteen.

At Rs 1 idly, Rs 5 sambar rice and Rs 3 for two chapattis, the canteen can provide three meals at Rs 15 a day. And that makes a difference to the monthly expenses of Jay Akash who has been eating at Amma Canteen for six months now. A supervisor at a firm, Jay Akash eats at the canteens at SRP Tools, Taramani and Chennai One. Jaya Akash, who was born and raised in Tiruvannamalai, resides at Madhya Kailash, earning some Rs 38,000 a month. The Amma Canteen provides a healthier, less expensive source of food for him. 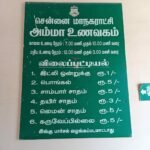 Chandramohan, a salesperson at a firm, has been eating at Amma Canteen for nearly eight years. Chandramohan’s wife is no more. His sons are married and well settled, he says, adding he intends to work for his living in his last days. If he were to eat outside, he would need to spend Rs 100 a day.

Chandramohan eats at OMR, Taramani, Red Hills, Mint and Tondiarpet Amma Canteens and rates Tondiarpet outlet lunch highly. Taramani’s chapatti and Dhal are tasty. “The cooks bring their own individuality even if the food is standard. I carry a pickle jar with me so I can add some spice if required,” he says, adding he can take care of all his food expenses at less than Rs 500 a month. “I am not sure restaurants can match Amma Canteen in cleanliness and hygiene,” he says.

Two construction labourers were found eating lunch at SRP Tools Amma Canteen on a recent Thursday. They bought four chapattis, sat down on the floor and ate. They said they come to Amma Canteen as much as possible. 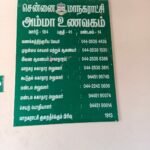 Not long after, a man wearing a Swiggy delivery uniform came inside the Amma Canteen. Karthik, the delivery man, said he eats dinner at Amma Canteen since it comes at Rs 10. He makes it a point to eat at least once a day at the Canteen, which makes a big difference to his budget, he says.

Sekar, who hails from Thoothukudi, has been eating at Amma Canteen for some two years now. His wife works as a teacher. Sekar says he has a three-floor house back home and is reasonably well off. Sekar has been living in Chennai for some 28 years. He has worked at Venus Water Heaters and now services wealthy households including political leaders as an electrician. Sekar earns Rs 40,000 a month.

During the pandemic and lockdown he started eating at Amma Canteen and found the food satisfying and home-cooked. The chapatis that cost Rs 70 in restaurants can be had at Rs 6. “Even if I have Rs 1000 in my wallet, I still come to Amma Canteen,” he says.

Not long after, a man wearing a Swiggy delivery uniform came inside the Amma Canteen. Karthik, the delivery man, said he eats dinner at Amma Canteen since it comes at Rs 10. He makes it a point to eat at least once a day at Amma Canteen, which makes a big difference to his budget, he says.

A youth with a bag strapped on to his shoulders like a typical techie walked in and bought 20 chapatis and stuffed it inside his lunch box. A woman walked in with children and bought chapattis to feed her family. A few women working near the SRP Tools Amma Canteen said they buy idlis from the canteen in the morning and make chutney at home. Visiting patients at the nearby Apollo Cancer Hospital come to this canteen.

A woman working at the canteen said she often sees many well heeled walking in. Auto workers, daily wage earners, construction labourers, as well as IT workers and professionals have food here. “If a mentally or physicall disabled person walks in, we give them food for free. If someone says they have no money, we give them food for free,” she says.

The woman, who didn’t wish to be identified, said she has been working at the canteen for nine years. She started with Rs 9000 a month and her salary has been reduced to Rs 6000. “We have no ESI coverage or such benefits either,” she said.