Recalling Nataraja Mudaliar. He made his point and left film-making

Over 50 years ago, a man in his 80s, named Rangaswamy Nataraja Mudaliar, approached the South Indian Film Chamber of Commerce for some financial help to make a film. But his old age and anonymity made the people there look at him skeptically. A brief background study on the man startled them for they came to know that he was the father of Tamil Cinema (Randor Guy: 2007).

Rangaswamy Nataraja Mudaliar, who carved out a niche for himself in the annals of Tamil cinema as the maker of the first South Indian film (silent) in 1917, had only a six-year stint in the field and retired in 1923, keeping away from the maddening sweep and growth of the Tamil cinema till 1972 when he died. This year (2022) marks the 50th death anniversary of the man who sowed the seeds of Tamil cinema.  But the juggernaut keeps rolling ruthlessly, trampling on several lives and crowning a select few. We wouldn’t be going out of the way if we were to pause and praise the forefather who invested blood, sweat and tears in its birth.

Born in 1885 in Vellore, Nataraja Mudaliar initially thrived in Madras as an auto spare-parts and, later, bicycle trader. There were two factors that drove him to plunge into film-making – an art that was a new rage back in the 1910s. The first one was Dadasaheb Phalke who made India’s first film ‘Raja Harishchandra’ in 1913 and the second was his contact with and learning of cinematography from Stewart Smith who was filming the administration of Lord Curzon,  the then Governor-General and Viceroy of India. Incidentally, Smith had a cinema house in Pune.

A fire in his studio, his son’s death and a falling out with business partners were cited as the reasons for his decision to ring down the curtain on his short career on celluloid.

Then started Nataraja Mudaliar’s journey towards the first South Indian movie Keechaka Vadham, whose content was suggested by Pammal Sambandha Mudaliar, one of the forefathers of the Tamil renaissance theatre and whose play ‘Manohara’ was made a film later in 1954. Drawing heavily on mythological lore to reach out easily to the audience,  Mudaliar chose the storyline from the Virat Parva of the epic Mahabharat, which deals with Bheema’s killing Keechaka who tries to woo Draupadi.  He produced and directed the film in 37 days in his studio ‘India Film Company’ (the first one in South India) on Millers Road at Purasawalkam, an unlikely locale for a film studio. 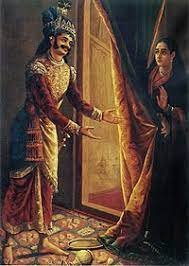 The first South Indian silent movie Keechaka Vadham, whose content was suggested by Pammal Sambandha Mudaliar, one of the forefathers of the Tamil renaissance theatre.

The crew members of Keechaka Vadham were all Tamil and so it is hailed as the first Tamil movie. The title cards were, however, flashed in Tamil, Telugu, English and Hindi across the silent move. Devdas Gandhi, son of Mahatma Gandhi, penned the Hindi titles.

Enthused by the good returns from his maiden venture  that yielded Rs15,000 net profit on an investment of Rs 35,000 (in those days Rs 13 would do to buy a dollar), Nataraja Mudaliar went on to make further films: Draupadi Vastraharanam, Mahi Ravana, Lava Kusa, Kalinga Mardanam, Rukmini Satyabhama and Markandeya.

He called it a day in 1923 after producing seven silent movies, passing the baton on to film-makers such as A Narayanan whose General Pictures Corporation doubled up as a school for future directors of repute. A fire in his studio, his son’s death and a falling out with business partners were cited as the reasons for his decision to ring down the curtain on his short career on celluloid.

As the years went by and Tamil cinema started growing by leaps and bounds, the father of Tamil Cinema slowly sank into oblivion. Only a few notes about his later life have been recorded.

In 1970 he was honored with a silver memento at a function presided over by then Chief Minister M Karunanidhi.

Nataraja Mudaliar spent his last days in his daughter Radhabai’s house at Ayanavaram in Chennai, suffering from kidney disease.

Though his career was short, it was strong enough to inspire hosts of film-makers such as J C  Daniel, the father of Malayalam cinema.