JC Daniel: Father of Malayalam cinema was a Kanniyakumari man

JC Daniel, who was from Agastheeswaram in Kanniyakumari district, produced, directed and acted in the first Malayalam feature film.

Now recognized as the father of Malayalam cinema, Daniel was born in Agastheeswaram in Kanniyakumari, then a part of the Travancore kingdom. Thiruvananthapuram had a cinema company called Capital Theatre which served as inspiration for Daniel. It sowed the seed of making a Malayalam film in Daniel.

Daniel went to Chennai to learn cinema. But no one took him in and tutored him.

He then went to Mumbai, then Bombay, to renew his aspirations. There he learned cinema and returned. He sold his property in his native village and started production work on Vigathakumaran with that money. Vigathakumaran cost Rs 4 lakh to produce and was completed in 1930. A still from the film Vigathakumaran in which JC Daniel is seen on the right.

Daniel had troubled finding actresses. The heroine of Vigathakumaran was a nair woman but he couldn’t find anyone to play the role. He instead cast a woman from the pulaya caste. He somehow managed to complete the shoot. 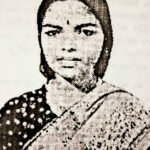 PK Rossy who acted in Vigathakumaran

When the film was released it created a controversy. Caste oppression was common in the Travancore kingdom at that time. The depressed classes were treated like slaves. Vigathakumaran had a woman from the lower caste group of pulayars play an upper caste nair woman, which made the upper castes angry. Vigathakumaran had to stop playing because of this problem. Violence erupted.

The pulaya woman who acted in the film faced many troubles. Violence was unleashed on her. She had to flee to save her life. Her hut was set on fire and her family was destroyed.

The pulaya woman who acted in the film faced many troubles. Violence was unleashed on her. She had to flee to save her life. Her hut was set on fire and her family was destroyed.

Daniel had to leave Travancore kingdom and move out. He faced severe losses as his film couldn’t be screened. He lived in poverty for nearly all his life after that.

The prints of Vigathakumaran were lost to posterity. Daniel passed away in 1975.

Later, due to the efforts of Chelangat Gopalakrishnan, the Kerala government recognized Daniel as a pioneer of Malayalam cinema. The lifetime achievement award in Malayalam cinema was been named after Daniel in 1992.

Nandini was introduced to Malayalam films as the pulaya woman. Her portrayal was realistic. A poster of the 2013 Malayalam film Celluloid, a biopic of JC Daniel, in which Malayalam film actor Prithviraj Sukumaran played the filmmaker. (Photo: IMDB)

JC had four children who had left the house for studies and work. In his last days, Daniel lived with Janet in Agastheeswaran. Chelangat Gopalakrishnan, a journalist, came to know of this and tried to meet him. But Daniel refused to talk to him.

This is how a piece of hidden history was brought to light. Gopalakrishnan made several efforts to highlight JC Daniel’s place in history and role.

The recognition had to come from Malayattoor Ramakrishnan, a writer and IAS officer. But he refused saying no print of the film had survived.

Gopalakrishnan’s attempts to explain the facts to him were failures. The film says caste prejudice played a part in Ramakrishnan’s response.

The recognition had to come from Malayattoor Ramakrishnan, a writer and IAS officer. But he refused saying no print of the film had survived.

Balan was recognized as the father of Malayalam cinema until then. Salem Modern Theatres had a role in that.

Celluloid was made at a cost of Rs 3.5 crore. It has scenes of Tamil actor PU Chinnappa taking Daniel for a ride.