When tribal youth V Elumalai graduated in medicine and became a doctor last year, he was not only the first graduate in his family but also in his entire village.

He is from Akkaraipatti in the Kalvarayan Hills, some 30 km from Tiruvannamalai. The village is 6 km away from Bimarapatti and some 7 km away from Dharmapuri’s Kottapatti – the two closest towns. One can reach Akkaraipatti only from these two places. As is the case with small tribal hamlets, there is no bus to Elumalai’s village. Most people walk the distance.

Akkaraipatti is an outlier up in the mountains. It has no basic facilities that city folks have taken for granted for many decades. There are all of 25 houses in the locality, all having tiled roofs, not concrete, and some of them just huts. Electricity reached this remote village only a few years ago. There is neither a school nor a primary health center here. To purchase anything, villagers have to walk to the nearby towns.

Elumalai’s folks are tribal people who are called Malayalis. They speak no Malayalam, however, and their names only indicate they are from the malai (mountains).

Elumalai’s father Veti, a farm labourer who has never set foot in a school, provided the little that the family survived on. When he was still a child, Elumalai lost his mother Neelavathi.

The family lived in a house with a tiled roof. But Elumalai most grew up in school hostels. So, although his village did not have electricity, he did. That meant he could study in the evenings. But if he wanted to go visit his family, he had to tread a mountain path. It wouldn’t have been possible to study as a day scholar, he says.

Elumalai’s folks are tribal people who are called Malayalis. They speak no Malayalam, however, and their names only indicate they are from the malai (mountains).

The boy grew up with seven sisters, all older to him. The family could not afford to educate all of them. None of them made it past primary school. Elumalai gratefully recalls that it was his sisters who took care of him and helped him continue his studies, while they themselves gave up their education. Sometimes they would go to work to help add to the family income.

They are all married now, he says.

Until Class 5, Elumalai studied in Beemarapatty, after which he shifted to at Good Shepherd High School, some 7 km away in Gurukilampoor. His father and sisters would try to pool money and send it to him so that he could continue his education, he says.

In Class 10, in 2012, Elumalai scored 439 marks out of 500. The family did not have the means to educate him further. But seeing that he had scored well, Akkaraipatti panchayat president Kannan took him to Aroor where he got him admitted into Annai Matriculation Higher Secondary School. 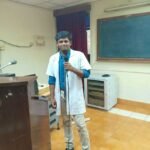 Elumalai, the first doctor and graduate of his tribal village Akkaraipatti in the Kalvarayan Hills near Tiruvannamalai.

Elumalai didn’t have to pay school fees there. The school management didn’t charge him the hostel and mess fees either. He took the Maths, Physics, Chemistry and Biology group. Like before, it was a Tamil medium school. At the time, Elumalai’s only aim was to study in a college and get a degree. And he put in a lot of hard work to be able to achieve this.

The NGO Agaram Foundation took care of his MBBS fees and hostel expenses. The money from his scholarship and the help from friends sustained him through his medical education.

When he entered MMC, Elumalai was in awe. Classes were in English and this was new to him. But his friends helped him, and slowly he got used to the lessons not being in his native tongue. He recalls with pride that despite the language barrier he passed all the papers in his first attempt.

The boy grew up with seven sisters, all older to him. The family could not afford to educate all of them. None of them made it past primary school. Elumalai gratefully recalls that it was his sisters who took care of him and helped him continue his studies, while they themselves gave up their education.

The young achiever finished his MBBS last March, becoming the first ever doctor from his village and a first-generation graduate. 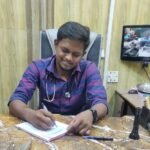 Dr. Elumalai working in a hospital

He has now got a seat in MD pediatrics in his alma mater MMC itself. The NEET PG counselling, which had been delayed for months over objections raised on reservations in postgraduation seats, just got over. Elumalai says the stipend of Rs 45,000 he would get would take care of his education. Plus, he also worked at a private hospital while preparing for the NEET PG entrance exam.

Speaking of education, Elumalai hopes the government school near his school is upgraded and offers good education. He says he will work with others to make it happen. The young doctor says only education can lift people of his community out of poverty and towards a better life. He wants to help in providing better education to his people, so that more first-generation graduates come up and help subsequent generations flourish. That’s Dr. Elumalai’s dream.