One interesting legend in Indian military history is how a most cruel, sadistic British officer inadvertently initiated a cult called Nikal Seyn. General John Nicholson‘s brutality should have made him a demon among native Pathans of North Western Frontier but they began revering him for the same reasons. They even willingly marched behind him to give that final blow on the mutineers while the British took Delhi back during the 1857 rebellion.

Strange as it may sound, though the English came to rule and exploit India, some of them left behind a lasting legacy.

Retired teacher Krishna Prasad from Palakollu in West Godavari district once stumbled upon a Brahmin priest who told him an interesting anecdote. During evening prayers at the Godavari River, he heard his counterpart reciting ‘Om Shri Cottonaya Namo’. Startled, he asked this man who Shri Cottonaya was and the other responded, “The one who gives water and food is god. So, what is wrong calling Sir Arthur Cotton a god?’

Sir Arthur Cotton is indeed a god for thousands and thousands of people in Coastal Andhra Pradesh. He irrigated a vast tract of land and provided a living for us. — Retired teacher Krishna Prasad from Palakollu in West Godavari district

Krishna Prasad in a telephonic interview adds, “Sir Arthur Cotton is indeed a god for thousands and thousands of people in Coastal Andhra Pradesh. He irrigated a vast tract of land and provided a living for us.”

Coming back from North Western frontier and Coastal Andhra Pradesh to Tamil Nadu, the state government has recently announced that it would erect a statue for British Engineer John Pennycuick in England. Colonel John Pennycuick is the one who constructed Mullaiperiyar dam in Kerala’s Idukki district.

Pennycuick’s work is hailed as an engineering marvel as the dam diverts the west-flowing Periyar river to the east. The dam which has run into a serious controversy with neighbouring Kerala supplies water to Theni, Madurai, Dindigul, Sivaganga and Ramanathapuram districts of southern Tamil Nadu. 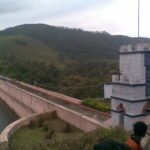 The Mullaiperiyar dam which has run into a serious controversy with neighbouring Kerala supplies water to Theni, Madurai, Dindigul, Sivaganga and Ramanathapuram districts of southern Tamil Nadu. (Photo Credit: Jayeshj at Malayalam Wikipedia)

Chief Minister Stalin said that the necessary permissions have been obtained from local authorities in Pennycuick’s hometown Camberley.

As the state celebrates Mattu Pongal on Jan. 15 every year, Palarpatti village in Theni district celebrates Pennycuick Pongal, the day he was born in 1841. “It took some time for us to find out his actual birth date. For the last twenty years, we have been offering Pongal to Pennycuick. Samikkuthaane pongal vaippom, avarum enga kulasamithaane? (Pongal is offered to Gods and Pennycuick is one among our Gods),” O Andi, who hails from of Colonel Pennycuick Peravai in Theni district, says with excitement.

“I seriously don’t like anyone naming their sons after Pennycuick,” he adds. “What if they inadvertently do something bad and soil that name,” says Andi who is from Palarpatti. Andi has named his daughter Sarah after Pennycuick’s mother.

Pennycuick is a name that commands respect in this part of Tamil Nadu. Public Works Department offices and the Theni bus terminal are named after Pennycuick. Tea shops, nurseries, farms, and business ventures too carry his name. Even buses are painted with his picture. His portrait adorns the houses of many farmers along this agrarian belt. Badmouthing Pennycuick is not tolerated in this region, just like anything said against Arthur Cotton will bring on serious condemnation in Coastal Andhra Pradesh.

So, how did an Englishman turn into a demigod in rural south Tamil Nadu? The irrigation project and Mullaiperiyar dam constructed by Pennycuick turned the arid region into a prosperous one. “Andha vellakara durai dam kattama irundha neenga ellam panjam pilaikka veliyoor poganam da (If that English man had not constructed the dam, you would be migrating to other places for a living) was the usual refrain we heard from our professors during our college days,” recalls Andi.

From tool of British capitalism to accidental saint

History professor Solomon Bernard Shaw says the British established irrigation projects for their own benefit. The projects brought more lands under cultivation and would augment the tax income of the colonial rulers. The Asiatic mode of production, as Karl Marx described, required roughly 45 cents of land for a man to produce his own food and ensure his self-sustenance. The British East India Company and British Raj fiddled with their land reforms bringing in the Zamindari and Ryotwari methods. 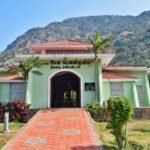 The Colonel John Pennycuick memorial at lower camp, Theni houses the statue of the British engineer and many old photographs of the construction of the Mullaiperiyar dam, which he built. (Photo Credit: Casualwalker.com)

The land reforms and pushing cash crops on Indian peasants brought them under great misery. Cotton and Indigo was promoted for the British textile industry and the Raj ended up leaving India under a series of famines. There is a theory of greatness in which greatness is thrust upon some people, sometimes even the most undeserving. Arthur Cotton and Pennycuick were tools of British aspirations in India. “To an extent, we can say they are some exceptions among the exploiters,” Shaw said.

But Krishna Prasad or Andi and their descendants would never see it that way. For them, Cotton or Pennycuick were not just some Englishmen searching for a fortune in a remote place; they were also officials who thought about the common good of Indian people too.

Pennycuick could have abandoned the dam work after the initial constructions were washed away in the floods. He constructed the dam in difficult terrain facing many hurdles. “Nearly 500 of our ancestors died during the work,” says Andi.

For the last twenty years, we have been offering Pongal to Pennycuick. Samikkuthaane pongal vaippom, avarum enga kulasamithaane? (Pongal is offered to Gods and Pennycuick is one among our Gods). — O Andi, who hails from of Colonel Pennycuick Peravai in Theni district

Many British officials manning the dam works also died and were buried near the dam. “Wild animals and diseases ravaged the project. But Pennycuick completed the dam selling his own properties back in his country,” says Andi. “Having faced all the adversities, he could have been one among the dead in that 500, but he lived. Simply because it was destiny. He was a God who came to redeem us from our misery.”