Add flavour and nutrition to food with cold pressed oils

One of the reasons why Indian cooking is tasty is because of our fried foods. Most of us prefer to have poori over chapathi, gulab jamun over payasam, and even French fries over mashed potatoes. The richness in our various cuisines comes not only from the wonderfully spiced dishes, but from the many deep-fried items that complete the reportoire.

In such a scenario, though we cannot restrict our palate, we should at least make the right choice in picking oil for our regular cooking.

As we pull the trolley towards the edible oil section in a supermarket, we always feel confused about which oil to select. The factors that create this confusion are the colour, branding, extraction method, cost, aroma, impact on health and its smoke point. One important aspect that impacts all the other factors is the method of extraction of oil from oilseeds, nuts or fruit.

There are two methods of extracting oil: cold press and hot press. In the cold press process, no heat is applied for extracting oil. In the hot press method, the oilseeds are roasted and pressed at high temperatures to enable better oil extraction.

There are two methods of extracting oil: cold press and hot press. In the cold press process, as the name suggests, no heat is applied for extracting oil from the produce. This means the oilseeds do not undergo a roasting process, and the oil extraction takes place at low temperatures. In the hot press method, the oilseeds are roasted and pressed at high temperatures to enable better oil extraction.

FSSAI defines acid number as the number of milligrams of potassium hydroxide required to neutralize the free fatty acids present in one gram of fat.

The acid number is a relative measure of rancidity, as free fatty acids are normally formed during the decomposition of triglycerides. Hence the oil extracted through cold press retains its natural flavour and nutrients, with a low acid value.

Coconut oil, gingelly (sesame) oil, groundut oil, mustard oil and olive oil are some of the common oils that can be produced using the cold press method. These are also available as refined oils. But it’s best to use the safe and more nutritious cold-pressed versions as far as possible. The only time it is more acceptable to use hot pressed oils is while deep frying. The low smoke point of cold pressed oils makes them unsuitable for deep frying. The high temperature required for deep frying could destroy the nutrients in cold pressed oil. High heat could also break down the oils and form compounds that could be harmful.

Which oils are hot pressed and why?

Not all oils can be extracted using the cold press method. A few oil seeds must undergo heat treatment to bring out the oil in it. Common among these are sunflower oil, soya bean oil, canola oil, safflower oil, rice bran oil, cotton seed oil and rapeseed oil. Besides, the hot press method and the subsequent refining process is also needed to remove the anti-nutritional factors or unpleasant flavour from certain types of oil. For example, to reduce the beany flavour in soya bean oil, it is hot pressed and refined to make it tolerable. 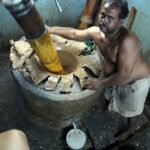 Groundnut being cold pressed for oil. The leftover oil cake, as seen in this picture, is a rich source of protein and is used in protein supplements and animal feed. (Photo Credit: Wikimedia – Etan Doronne)

Similarly, the anti-nutritional factor gossypol which is present in cotton seed, has to be removed to make it edible without harmful effects. In such cases, after the hot press extraction, the oil also has to undergo a refining process.

Another reason that oil producers prefer the hot press is because the yield is significantly higher than cold press. But typically, hot press oils need to be refined to remove impurities and to lighten its colour. Refining is also done to make the cloudy oil clearer.

Yet another example is roasting of oil seeds to improve its aroma which is familiar in the case of groundnuts/peanuts. Roasting at high temperature adds a good aroma to the oil and also improved the yield. In case of sesame seeds, oil can be extracted either by cold press or hot press. In this case too, the hot press gives higher yield whereas the cold press gives a healthy oil that retains the natural aroma, colour and nutrients.

As the yield is lower in the cold press process, the cost of these natural oils is usually higher.

In Tamil Nadu, gingelly oil (nallennai) made from sesame seeds (ellu/til) is widely used. Of late more people are opting for its cold pressed version as it is healthier.

Sesame seeds naturally contain phytosterols, which include contain lignans, sesamol and sesamolin. In addition, gingelly oil also has omega-3, omega-6 and omega- 9 fatty acids and Vitamin E. These unsaturated fatty acids protect the heart by bringing down the levels of triglycerides and LDL (bad cholesterol). These nutrients are naturally passed on and preserved in cold press oil.

One important thing to note is that plant sources naturally do not have any cholesterol in them. It is only excess consumption that is stored as cholesterol in the body. Hence, do not believe in any advertisements that claim that cholesterol has been removed from the product.

In south India, sesame or gingelly oil has been used for generation to regulate body heat, to slow down aging of skin, and for a process called oil pulling where oil is swirled in the mouth and then spat out (it is said to be for good dental health and for removal of toxins). Every woman in Tamil Nadu has likely consumed a good amount of gingelly oil during their puberty, pregnancy and while breastfeeding their children. This is because the phytosterol in gingelly oil is equivalent to the hormones in women.

The Tamil practice of feeding girl children with cold pressed gingelly oil to improve health and fitness is something that more people can adopt. It is best to use cold pressed oil.

Another aspect of using the cold press method for oil extraction is that nothing goes waste, because the oil cake leftover is a rich source of protein and is used in protein supplements and animal feed.

As health awareness is increasing among the public, we are realising that ancient ways and methods are more beneficial to us than some modern ones. This is leading to more people adopting cold pressed oils and cast-iron cookware, among many other olden days’ norms. May this backward change be for a better and healthy future.