As people are becoming more and more health conscious, they’re not only focusing on what they put on their plates but also what vessels they cook their food in. For this reason, cast iron cookware is making a big comeback into Indian kitchens, replacing their Teflon counterparts.

While cooking is an art and a passion for many, it has undeniably been a nightmare for some. Particularly when one is pressed for time and can’t afford to have food sticking to vessels which makes more work out of cooking and cleaning. Convenience therefore became the buzz word as more women took the workforce in the past few decades, and the ‘wonder’ called Teflon became all the rage.

Admittedly, non-stick cookware is user friendly, a breeze to cook with and easy to wash. But Indian cooking methods, which typically require longer cooking time, mean that the pan could overheat and that some cooks could end up charring their food even while using the non-stick cookware. Besides, the Teflon coating also comes off while sautéing the food or while scrubbing the dishes.  Significantly, the American Cancer Society has listed the chemical used to give Teflon its non-stick quality as a carcinogen. Bits of this carcinogen could enter our digestive systems when we cook food in Teflon vessels.

Cast iron cookware heats up more evenly and retains heat for longer. Seasoned right, their surface becomes quite non-sticky too and easy to use. Nowadays, one can easily buy cast-iron cookware that has already been well-seasoned.

Rising awareness of these harmful effects of non-stick cookware has prompted people to go back to using the iron and cast-iron cookware of their grandmothers’ kitchens. What were once passed on as heirlooms but were lying neglected in some corner cupboard are now being cleaned up for use in modern kitchens. And for good reason. 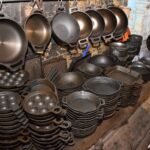 It is said that processing foods in iron machines and using iron cookware adds iron content to food. Roasting peanuts in an iron rolling roaster or pressing rice in an iron flaker at high temperatures adds iron content to the food. Iron is added to food when one cooks foods in iron cookware too. Besides, anyone can attest to the superior taste of food cooked in iron or cast-iron utensils. I myself am a great fan of the tasty, spicy reddish-brown chicken gravy and chicken fry that my mom makes in our cast-iron karahi (kadai/wok/deep pan). I also love that I get to own the seasoned karahi which I consider an asset from my mom.

Cooking in a cast-iron utensil gives food a characteristic color. The color comes from the leaching of iron from the pan into the food while cooking. However, contrary to common belief about iron cookware being good for people who are anemic, the amount of iron that leaches into food while cooking is not very significant.

Yet, when the bargain is between having to eat carcinogens from non-stick cookware and consuming safe and tasty food made in cast-iron cookware, the choice is no-doubt obvious. So much so that sales of iron and cast-iron cookware have gone up in recent times.

Iron utensils had been used for 2,000 years, particularly by the Chinese, before they became globally popular after Britisher Abraham Darby discovered and patented a casting process in 1707. He discovered a method of smelting iron using coke rather than the better quality charcoal, which made the mass production of cast iron economical.

Meeran, an iron and cast-iron cookware merchant in Madurai’s Pudhumandapam, says his business has been booming of late. Some customers come to his shop after relatives living abroad tell them of the health benefits of iron cookware. Most of these referrals are from the Middle East, he says.

A little bit of history

Speaking of the Middle East, did you know that iron utensils had been used particularly by the Chinese for 2000 years before they became globally popular after a casting process was discovered and patented in 1707 by a Britisher named Abraham Darby? 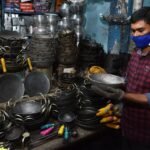 Cast-iron cookware is becoming increasingly popular, says Meeran who owns the store that sells these utensils.

Darby pioneered an innovative method of iron smelting using cheap coke from local coal furnaces rather than the more expensive charcoal to make the mass production of cast iron more economical. Besides, cast iron cookware is also preferred for its ability to heat up evenly across the surface and also to retain heat for a long time, compared to non-cast iron utensils. This is what led to the widespread adoption of the cast-iron cookware, that are now available in various forms such as frying pans, grills, waffle presses, deep fryers and karahis.

Seasoned right, the surface of cast-iron utensils becomes quite non-sticky too and easy to use. Nowadays, one can easily buy cast-iron cookware that has already been well-seasoned. Here’s how to take care of your cast-iron vessel.

After using the cast-iron utensil, soak it, gently scrub with mild dishwashing liquid and wash thoroughly. Wipe dry the utensil and heat the pan to remove moisture completely and gently coat with oil using a cloth, both inside and outside to keep the vessel seasoned. This also avoids rust formation. Repeated use of cast iron for cooking will improve its seasoning, and you will love to use the aged cast-iron utensil. Cooking in cast iron vessels is said to increase the flavor and color of food.

Apart from cast iron, there are some other cookware one can use too.  Here are some things to keep in mind while selecting cooking utensils.