60 years ago, an Irular leader fought for all tribals

After the film Jai Bhim was released, the oppression that Irular tribes face has come into the public eye. But, the Irulars had a leader more than 60 years ago who fought for their rights and that of other tribal people. His name was V R Jagannathan.

Irular community organizing seems to have had some history in the state. A conference for Irulars was held as early as 1930 in Tindivanam taluk. It is not known which organization put together the conference. A reference to the conference in the January issue of the publication Dravidan serves as the only historical record.

Jagannathan worked in an insurance company then at the Chennai port. He was a Congress functionary and served as the treasurer of its Chennai unit. Though a Congressman, he was close to Dravidian leaders. He was honoured by Indira Gandhi in the presence of K Kamaraj for his service to the Irular community. A publication for a Congress conference in September of 1965 contains his photograph.

The political experience he got from the Congress and his service as a worker in the port helped him to set up an organization for Irular welfare. Born in 1937, Jagannathan set up the South India Adivasi Seva Sangam in 1958 at Debar Gardens in Vyasarpadi, Chennai. In 1961, he was nominated as a member of the Adivasi Advisory Council by the Tamil Nadu government. Through this agency, he served Irulars and other tribals. 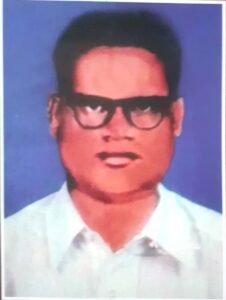 Jagannathan set up hostels for Irular students at Saidapet, Chennai, and Sathiavedu in Thiruvallur. Many students who stayed here have gone on to serve in central and state governments.

Jagannathan worked to get housing land and houses built for Irulars so they could settle down in one place. He helped to get drinking water wells sunk for them so they could have their own source of water. For instance, in Athimur village where some 15 Irular families lived, he got them land for a house, house as well as a well. Jagannathan created an Irular housing colony at Debar Gardens. In Kodungaiyur and Minjur he helped Irulars get housing land.

In some places, Jagannathan helped Irular get farmland so they could earn a livelihood. To help these families take up farming, he helped to get an irrigation well dug as well as obtained farm equipment and cattle with government subsidies. Jagannathan’s life was one of dedicated service.

Jagannathan set up hostels for Irular students at Saidapet, Chennai, and Sathiavedu in Thiruvallur. Many students who stayed here have gone on to serve in central and state governments.

There are only a few references to a historical personality such as Jagannathan. In 2017, a booklet named Irulargalin Deivam VR Jagannathan was compiled and published by Irular Protection Association with help from Kavasam. This booklet serves as small introduction to the leader. Many Irular families working in brick kilns and rice mills as bonded labour got a new life as a result of the efforts of Jagannathan. Murugappan Ramaswamy, who compiled the book, says what Jagannathan did still needs to be done for Irulars.

Ramaswamy says that during the Irular conference in 1967, Jagannathan passed a resolution demanding stipend for Irular students as well as support of Rs 100 for families who had lost their houses during a storm. Ramaswamy says at a conference for tribal people in 2019, the conference organizers had released a T-shirt with Jagannathan’s photo. Some 500 T-shirts were sold quickly, he recalled, indicating interest in the political leader among tribal youth.

Jagannathan’s grandson Sukumaran says in the days of votebank politics it is not surprising that a true leader who fought for the welfare of tribals did not get enough recognition. Much of Jagannathan’s life and work remains to be recorded for posterity, he says.