Dr Jothi secured 200 out of 200 in all four major subjects in her Class 12 to achieve a cut off mark of 100% to get her MBBS seat. An impressive record indeed and it is a moving story of a man and his daughters from Kadaieeratti hamlet in Tamil Nadu – Karnataka border near Anthiyur in Erode district.  Jothi is the first doctor as well as the first graduate from her tiny village.

Kadaieeratti is located five kilometers from Bargur in Anthiyur taluk. A typical hilly village, it lacks many facilities including a proper hospital. Jothi’s father C Peran belongs to Oorali tribe. He had studied till Class 5 and cultivated millets and tapioca in a small farmland the family owns. The farm was the only source of income for the five member family which lived in a small house. Mother Palaniammal is a housewife. Peran tried to run a petty shop but his venture did not work out. 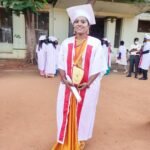 Dr Jothi during her convocation ceremony

Not many children would venture beyond the primary school in Kadaieeratti village. The government school had two teachers. Jothi, like other children, studied in that school. But Peran was determined to educate all his three daughters.

He admitted them to a government school in Anthiyur, 25 kilometers away. But bus facilities to the school from his village were erratic. So, he rented a house in Anthiyur and lodged his girls and wife in that house. He stayed back in the village taking care of the farm for livelihood.

Jothi credits her father for her success. Parents won’t allow girls to study beyond Class 5 in the hill villages. Most of them are married off at a young age. But her father was determined to educate all the three girls at any cost, she says.

Jothi, like other children, studied in that school. But her father Peran was determined to educate all his three daughters at any cost. 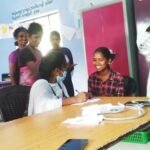 Dr Jothi in medical camp organised in her village

Jothi secured 485 out of 500 in SSLC and was a topper in school. The rank helped her to study in Adarsh Vidyalaya, a residential school in Paruvachi near Bhavani. She joined pure science group. And, Jothi did everything to top in this school as well. “I would wake up early morning to study. After school hours, I would study till 11 pm. The medical education admission used to happen based on cut off marks secured in Class 12 then. So I realized the value of my marks,” she says.

She secured 1187 out of 1200 in 2014. Jothi scored 200 out of 200 in Mathematics, Physics, Chemistry and Biology. Her cut off was centum. She could apply for engineering as well as medical and she opted for medical studies.

Jothi scored 200 out of 200 in Mathematics, Physics, Chemistry and Biology. Her cut off was centum.

Though she was entitled for Scheduled Tribe quota, she got her seat in the general category because of her marks. She got her medical seat at Chennai Medical College on the first day of counseling. Impressed by her feat, Erode District collector gave her Rs 20,000 prize. She also secured a government scholarship.

Agaram Foundation took care of her hostel fees. But Jothi had a problem when she switched to English medium from Tamil medium. “I struggled for one year and used to take the help of my friends in studies. But I picked up the subjects gradually. I completed my MBBS with 75% in 2020,” she said.

After working in a private hospital for some months, Jothi is now preparing to study MD in General Medicine. She has applied for a post in ESI Hospital. She is staying in her sister’s house in Erode and preparing for her entrance examination. Unfortunately, her father has passed away recently. But Jothi is determined to complete her higher studies. Once she completed her MBBS, she organized a medical camp in her village. She invited army doctors Krishnaveni and Vani Priya and Dr Thamaraikannan from Erode. “It was a proud moment. My villagers were thrilled when I conducted the camp. I want to do something back to my community,” she added.