Born in a family of limited means, Vani Priya became a doctor with the support of people around her. Now serving in the Army, she is giving back to society by providing free treatment camps and medicines to poor people.

Vani Priya comes from Thamarankottai, some 12 km from Pattukottai. Her father Balasubramanian.had a petty shop. Her mother supplemented the family income by working in farms and doing other odd jobs.

Balasubramanian wasn’t well educated but was Periyarist in thinking. He had participated in anti-Hindi agitations. He ensured Vani Priya developed a reading habit. Her mother had studied up to Class 12 and was intent on educating her daughter.

Vani Priya studied in a matriculation school up to Class 5 in Muthupettai. Unable to afford education in a private school, she studied from Class 6 to Class 10 at the government school in Thamarankottai. She scored 478 out of 500 in Class 10.

She joined Brindavan High School in Pattukottai for further studies. The school management decided to forego her fees considering her family background and her high scores in Class 10. She took Science group in Class 11. Vani Priya decided she wanted to become a doctor.

Vani Priya’s mother wanted her to study engineering since she would be able to get a job after four years but Vani Priya was insistent she wanted to become a doctor.

Vani Priya’s father was stricken with cancer at that time. His medical expenses had to be met with loans that only added to the loans the family had already taken. In Class 12, her mother also fell sick. Therefore every day, Vani Priya would finish her household chores and then go to school. While her friends took tuition classes to prepare for exams, Vani Priya couldn’t afford such classes.

Vani Priya’s father was discharged from hospital and brought home. At that time, her relatives started badgering the family to get her married since the family wouldn’t be able to pay off the loans and continue educating her. Vani Priya deftly dodged the issue saying the decision can be made after her exams were over. Her goal was medical studies.

Vani Priya recalls the support her teachers gave her as she went about preparing for her exams. Vani Priya scored 1173 out of 1200 in Class 12 in the year 2013. She scored centum in Math. Vani Priya qualified for medical as well as an engineering seat at Guindy Engineering College. Vani Priya’s mother wanted her to study engineering since she would be able to get a job after four years but Vani Priya was insistent she wanted to become a doctor. Studying by herself, Vani Priya appeared and passed NEET that was then conducted for All India quota in medical colleges. 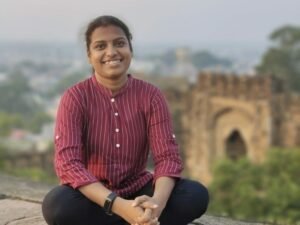 Vani Priya got admission at the Sivaganga Medical College through counselling. She later got admission in Thiruvarur Medical College. Vani Priya chose Thiruvarur since that would allow her to visit her home often and take care of her mother. To help meet her expenses in studies, she applied for help at the Agaram Foundation of actor Suriya which was granted. The mentoring programme the foundation ran helped her gain confidence, she says.

After graduating from MBBS, she worked at SRM Medical College in Tiruchi for some time. With this salary, she was able to pay off all the loans the family had.

Vani Priya wanted to serve in the Army. She passed the short service commission exam. After training in Wellington, Nilgiris, she has been posted as Captain at the Army Hospital in Jhansi, Uttar Pradesh.

Vani Priya says she will be promoted as Major if she worked for four years here. After that, she will get an opportunity to study Masters in surgery and then study the super-specialty course in cancer treatment.

Vani Priya’s mother whose hip bones have been affected is being looked after by her relatives in Tiruchy. She says she will be able to bring her mother with her once she settles down. Wanting to give back, Vani Priya conducts medical camps at remote villages or hilly areas where medical services are not available. She does this with Dr Krishnaveni who is serving in the Army as Major. She says they procure medicines at their cost to give to villagers. “Education provides a stepping stone. Whatever troubles come, one should never give up studies,” says Captain Dr Vani Priya.