Crippled chef pens his life story with one finger

Fifteen years ago, Loganathan, 38 from Coimbatore was brimming with life. He was Chef de Partie at Hotel Oberoi in Jaipur. He was able to support his family and educate his brother. But an accident on Nov. 26, 2006 changed his life forever. It crippled him for the rest of his life but Loganathan was not ready to give up. He is still working with Oberoi and completed his Master’s degree and penned his life story using just one finger, the only body part he can move below his neck.

Loganathan’s family hails from Sempadapalayam in Karur. Father Sellamuthu is a truck driver and mother is a housewife. She also used to work as a maid to augment family’s income. Loganathan studied in local schools. He studied biology in his Plus 2. His headmaster used to explain to the students about the Hotel Management course. Loganathan decided to pursue Hotel Management and secured a seat at the State Institute of Hotel Management at Trichy. He wanted to become a chef. 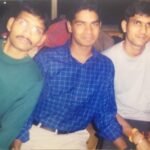 During campus interview, he was selected as In-House Supervisor Trainee at the Residency Hotel in Chennai. But he continued looking for chef jobs. Four months later, he got an opportunity with Hotel Oberoi in Jaipur. He joined as Commis Chef. Two years later, he was promoted to Chef de Partie. Loganathan was really happy. On that fateful day, he went to attend a party at his friend’s house. As he was standing in the signal, a mini-van mowed him down.

Loganathan suffered cervical spinal cord injury. He was paralyzed below the neck. He could move just his head and right thumb. He could be moved around in a wheelchair and for the rest of time he is confined to his bed. Life came crashing down on him. Fortunately, the hotel he worked at did not give him up. Loganathan says Hotel Oberoi Chairman P R S Oberoi called him over the phone. “He told me, I am still their employee. The hotel management will take care of medical expenses. My friends are helping me out. I can’t thank Hotel Oberoi and my friends enough for their generosity,” he said.

Loganathan returned to Tamil Nadu after the accident. He went through extensive medical treatment and rehabilitation training. During this time, he decided to live on his own. He did not like people pitying him for his state. Hotel Oberoi was providing him with a monthly allowance. But Loganathan decided to work. His friend bought him a computer. After some training, he started earning some money working from home. 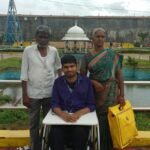 Loganathan with his parents.

Later, he approached Hotel Oberoi for a job. They recruited him full time in 2015. He works as Senior Reservation Associate for the hotel. He contacts clients over phone and email. His shift starts from 9.30am and he works till 6.30 pm. He is allowed to work from home. His mother Gowri takes care of him round the clock. She brushes his teeth, bathes him, changes his dress and feeds him. During the night, he has to be turned now and then, so she stays beside him. Loganathan has added his mother’s name in his initials as a token of gratitude. He is now G S Loganathan.

Loganathan suffered cervical spinal cord injury. He was paralyzed below the neck. He could move just his head and right thumb. Life came crashing down on him

Six years after the accident, Loganathan decided to pursue his higher studies. He joined M A Tourism Management in Madurai Kamaraj University through distance education mode. He completed the Masters programme in 2017, five years after joining the course as he had to cross many hurdles to complete the course. When he joined the rehabilitation training at Vellore CMC hospital, Dr Prince told him to write his life as a book. Many years later, when the pandemic struck, Loganathan decided to complete that work. He started writing his book on March 27, 2020 and completed on July 3, 2020. He would recall his life stories and record them on the phone. He would listen to the recording and start typing with his one functional finger. “I used to spend four to five hours daily on his book,” he said.

The 144-page book ‘Ivan vera mathiri alla’(He is not different) is an autobiography of Loganthan. He has sold 1,600 copies so far

He published his book on March 2021 with the help of his well-wisher Natarajan from Chennai. The 144-page book ‘Ivan vera mathiri alla’(He is not different) is an autobiography of Loganthan. He has sold 1,600 copies so far. People from Malaysia, Singapore and Canada bought his book as well. “I will be glad if my book motivates people who are suffering like me,” he added.