Once the object of smirks and snide remarks directed at its owner, Tamil Nadu’s manjappai (yellow bag) has come centre stage again as Chief Minister M.K. Stalin upscaled it and relaunched its second coming as “Meendum Manjappai.” The DMK leader sees it as a central element of contemporary environmentalism, an alternative to plastic rooted in traditional practice.

The manjappai was ubiquitous in the pre-liberalisation era, when a variety of shops handed out these often yellow-dyed cloth bags free, their commercial messages thickly emblazoned on the sides to serve as highly visible mobile advertising. The flimsy bags inevitably lost their reputation, as they turned up everywhere, dull, faded and frequently grimy from poor maintenance, seemingly symbolising parsimony, lack of prosperity and low sophistication. The advent of bright, cheap plastic bags and durable jute big shoppers hastened their demise.

Meendum Manjappai seeks to resurrect the bags as desirable objects of green couture, earning their patrons environmental credits as concerned citizens who will never step out of home without one. Of course, reinventing the manjappai involves contemporising its design, both from aesthetic and utility perspectives. In the era of design innovation, this is a contest that will attract many.

What is interesting is the antiquity of the original manjappai, which does symbolise auspicious beginnings. Krishnan Subramanian, who co-founded The Yellow Bag in 2014 in Madurai, told this writer on Friday that the philosophy of dyeing of cloth in natural turmeric yellow dye appears to be the origin of these iconic cloth bags, although in commercial manufacture, they were made of synthetic dyes that fell well short of green norms. Turmeric dye is ceremonially applied to new clothes, including wedding veshtis, as a symbol of good fortune.

The more recent iterations of reusable bags produced to replace plastic are unsustainable in many cases, he said, as they are made of low cost synthetic fibres procured from Surat, rather than cotton cloth that would both meet the norms of reuse, environmental sustainability and ultimate disposal. Lower production of cotton fabric also affects the economics.

Evidently, the way forward would be for Tamil Nadu to stop the entry of synthetic “cloth” bags and prohibit the use of any fibre other than natural ones in the manufacture of bags, specifically banning synthetic fibres.

In the State government’s spectacular Meendum Manjappai campaign launched on December 23, the dominant image in newspaper jacket advertisements is that of Mr. Stalin striding with a yellow bag, along with several citizens. All of them carry the ‘traditional’ yellow bag, with short handles, held hanging by the hand. 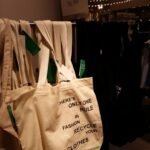 Though quaint and “rooted” in its messaging, it harks back to a time when design did not catch up with usability. Long and strong handles work better. Johan Hagberg from the University of Gothenburg in Sweden (2016), in an article titled “Agencing practices: a historical exploration of shopping bags, Consumption Markets & Culture” says these tweaks were the focus even in the mid-1960s, to improve the strength and carrying capacity of the bags, including those made of strong paper.

Today’s cloth bags found in Europe, quite often made in Madurai or somewhere else in South Asia, adopt the “hands-free” approach made possible by long handles.

The Tamil Nadu Environment Department does have a more modern, youthful design of backpack yellow bags with ‘drawstrings’ that would match the design ideas of Gen Z, and this was shared on Twitter by it.

There can be more iterations, with a combination of designs and materials of varying strengths, made for purpose and capable of heavy lifting. Bright bags of good plain fabric, like tee shirts, also open up a moving canvas for social communication, going beyond crude consumerist messaging.

For some environmentalists, there is even more to sustainability than the manjappai, which they see as an advance towards a circular economy. At the end of its useful life, these bags should be recycled into another product, says J. Kughanandam, a Gandhi and Sarvodaya-inspired entrepreneur whose venture, Geo Care Products in Chennai, turns many forms of waste into new material, such as paper, board and so on, and whose clients include big corporations and governments.

“Jute waste and farm residues can be tapped to produce new materials and articles,” he says, calling for open source recycling technologies to be developed with government support by universities for entrepreneurs, available to freely access without fees. This can come as a major boost to self-help groups. Geo Care will expand its circular economy campaigns in 2022.

Today’s cloth bags found in Europe, quite often made in Madurai or somewhere else in South Asia, adopt the “hands-free” approach made possible by long handles. 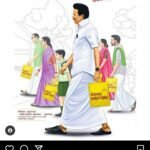 One encouraging development in the creation of reusable bags is mills making cloth at scale for bag production now, which was absent until curbs were imposed on the use of plastic bags. Today, with cheaper cloth available, cotton cloth-bag making can boost employment for women, more so in smaller towns, says Mr. Subramanian, whose The Yellow Bag is on Instagram  and can be found on the internet

The Yellow Bag network now has about 250 women, with prospects for a scale up as demand rises for bags. A dozen machines, purchased one after another in a scaled expansion, are located at its core facility in Madurai, while others are used by home-based members.

Manjappai should be a philosophy, rather than a literal mandate for the colour yellow, he says, since unbleached cotton is the best material and involves no extra cost. It also avoids use of unsustainable dyes that involve environmental pollution when disposed of.

In its earlier avatar, the yellow bag was carefully maintained by many. When it showed signs of wear, such as a weary handle severed, it was quickly repaired at home. Even today, the better-made bags enjoy high retention, underscoring the need for quality material and manufacture.

For CM. Stalin, the challenge is to get enough bags to hit the street. His predecessor, Edappadi Palaniswami launched an initiative in 2018 to cut the use of single-use plastic, with a dedicated website, brand ambassadors such as actors Surya and Jyothika, and even an order to buy paper files for government departments. The AIADMK moves stalled at the level of even flower vendors in Chennai, who sell pre-packaged flowers in flimsy plastic covers, rather than banana leaves. Jairam Ramesh as UPA Environment Minister failed to get a rule to charge for plastic bags enforced widely.

Tamil Nadu can bring back a manjappai designed for the new millennium, if it hits the sweet spot of good design, optimum price and wide availability. Social media opens the door to a national market, if not a global one for retailing these bags. There is also the possible bonus of creating a new era of women’s self-help groups, which were an acclaimed success in an earlier DMK regime, when Mr. Stalin was deputy to Chief Minister M. Karunanidhi.