Can Tamil Nadu truly break free from plastic in 2022?

The campaign against a growing tide of plastic waste in Tamil Nadu, as elsewhere, is a road paved with good intentions and green messaging, but one littered with failed campaigns.

Tonnes of plastic waste choke Chennai, smaller cities, towns and waterways. Annual monsoon floods in the capital city routinely turn the spotlight on plastic waste blocking the storm water drain system. They were identified as the problem in 2012, in 2015 and again in 2021.

When a ban on single use plastic was announced on World Environment Day in 2018 by the then Chief Minister, Edapadi Palaniswamy, to come into force on January 1, 2019, Tamil Nadu appeared poised to finally crack the plastic waste crisis. That ban quickly fell by the wayside, where it continues to lie under the DMK government.

It is no secret that while plastic plates, cutlery, table linen and carry bags have reduced in some large format events, notably weddings, tonnes of flimsy bags are flying around, within minutes of being used by a variety of vendors in Chennai selling everything from flowers to idli and dosa dough. No one wants these waste bags, not even the informal waste pickers, since they are not bought by the recycling sector. In Tamil Nadu, all kinds of carry bags are banned on paper. Curiously, neither the Greater Chennai Corporation nor Urbaser Sumeet, the private waste handler, has pressed for implementation of segregation of plastic waste at source by citizens, as the law provides for.

In October this year, Tamil Nadu’s Environment Secretary told the Madras High Court that the ban on plastic will show ‘considerable progress’ in three months, because of the many campaigns on implementing the ban on single use plastics. The court observed that sustained campaigns could change public behaviour.

In Tamil Nadu, all kinds of carry bags are banned on paper. Curiously, neither the Greater Chennai Corporation nor Urbaser Sumeet, the private waste handler, has pressed for implementation of segregation of plastic waste at source by citizens, as the law provides for.

Yet, as the national meeting of the Break Free From Plastic movement held in Chennai heard recently, Tamil Nadu also takes pride in expanding facilities for plastic production. Industries Minister Thangam Thennarasu told the summit on ‘Global Chemical and Petrochemical Manufacturing Hubs in India’ on November 26, that the State is leveraging investments to become a top destination for petrochemicals, with planned units in Thoothukudi, Nagapattinam and Cuddalore.

There is an ongoing programme for a polymer park across a 257-acre site in Puzuthivakkam in Thiruvallur district that was begun in the AIADMK government’s time, in 2020. The Standing Committee on Chemicals and Fertilizers in Parliament which takes a view on the sector is headed by DMK MP Kanimozhi..

There is no one kind of plastic, of course, and some plastics are attractive to recyclers while others are not. Moreover, many plastic manufacturing States quickly point out that the production is meant for sale outside the respective territories, and not for local use. 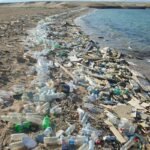 Viewed together, the economics of production in Tamil Nadu, the life cycle of plastic, the costs associated with pollution, collection and processing of waste remain unclear. For the average citizen, there is little incentive to participate because the plastic resin code that helps identify the recycling process for each type, such as 4 for low density polyethylene plastic bags and 1 for PET, is not even a matter of public discussion.

According to the Central Pollution Control Board (CPCB) Annual Report 2019-20, Tamil Nadu is one of the highest generators of plastic waste, at 12% of the total and 6 kg per capita annually, along with Gujarat, and next only to Maharashtra at 13%. These are self-reported data. On the other hand, the State claims a high efficiency of 92% when it comes to collection of plastic waste, but downstream waste processing outcomes are not clear.

Some of the insights from the #BreakFreeFromPlastic delegates show that a plastic ban call does not provide ready answers to complex issues: there is no credible database for actual quantum of plastic waste generated in India, since the data is not rigorously audited.

States and Union Territories make unverified claims on waste; a large community of waste pickers depend on some types of plastic waste for livelihood, and in spite of issuance of solid waste and plastic waste management rules, they have not been absorbed into the processing system in most bigger cities, Bengaluru being a partial exception; low value and multi-layer plastic (packaging, for example) is claimed to be used in road laying, but these are not independently verified; road contractors often merely procure waste purchase bills for audit; national registered formal recycling units have declined in number, while informal recyclers have risen; investments in formal recycling do not match the scale of waste generated.

The landscape is further complicated by increasing calls for adoption of incineration technologies to handle non-recyclable waste, where co-generation is used to try and burn away the plastic problem. Here again, as BFFP delegates pointed out, there is no audit of actual waste use or of environmental impacts. Reuters reported in October 2021, that a cement plant in Austria was found to be releasing toxic hexachlorobenzene, from the burning of industrial waste contaminated with pollutants. Such concerns have led to calls for strict environmental audits of cement plants claiming co-generation credits in India on the principle that superheated kilns burn up everything, including toxins.

For the average citizen, there is little incentive to participate because the plastic resin code that helps identify the recycling process for each type, such as 4 for low density polyethylene plastic bags and 1 for PET, is not even a matter of public discussion.

The CPCB says 116 urban local bodies in Tamil Nadu have agreements with cement companies to sell 20,000 tonnes of waste for use in their operations, besides 400 tonnes for pyrolysis plants, where the waste is converted to energy. Waste to Energy (WtE) is also a controversial technology, with not much known about its base for production and distribution. Recently, the New Indian Express reported that fishermen in Thoothukudi were sourcing  ‘plastic oil’ to operate boat engines, at Rs.70 a litre, from the Athur-Sankagiri belt in Salem, Coimbatore and Erode districts, as diesel prices skyrocketed, although they did not know that it could damage their motors.

Breaking free from plastic relies on the axiom that plastic use can stop only when the production stops, requiring brakes to be applied on the petrochemical industry’s growth. Consumer behaviour and the search for alternatives follow. Here, the global agenda is to force countries to adopt a strict plastic treaty of the kind proposed by Rwanda and Peru, turn the tap off on the global waste trade. In India, the State governments must compel the Union government to take a strong stand at the forthcoming UN Environment Assembly in February 28 -March 2, 2022 (virtual and in Nairobi) and chart the route out of plastic.