In Nilgiris, son of tea estate workers returns home to serve as doctor

For doctor S Krishnan, returning home and serving his community was the natural thing to do. Born in a Dalit caste group in Nelakottai of Bandhalur taluk of Nilgiris district, 27-year-old son of tea plantation workers is not only the first graduate in his family but also the first doctor from the area. Today, he serves at the Primary Health Center in his village along with his wife who is also a doctor. (Click here to read about a child labourer who became doctor)

Touristy Nilgiris is a place that people want to visit but not stay. For some, however, Nilgiris is home, as it is for Krishnan.

Krishnan’s roots are in Kambliyur in Tenkasi. His family moved some 70 years ago to work in tea plantations when there was a famine down south. His father, Subramani, has studied up to third standard and is a worker at Rockwood Estate tea plantation. His mother, Mahalakshmi, hasn’t studied in school and works at the same tea plantation. Krishnan has a sister and a brother.

Located some 60km from the town are a row of houses amidst the tea plantation there. Krishnan’s family of five used to live in one such house. Subramani and Mahalakshmi worked all day at the plantation but what they earned was just about enough to feed and raise five pairs of hands and mouth. Subramani was particular that his children should study, not toil in tea plantations when they grow up.

Krishnan studied up to Class 7 in Rockwood Middle School, then shifted to government school at Thevar Solai some 10 km away till his Class 10. The bus would leave at 7:30am and by the time he returned it would be 6pm. Rains would disrupt going to school. Power cuts would interrupt his studies. Yet, Krishnan scored 464 out of 500 in Class 10.

His high marks helped him to get admission at a residential school called Vidya Mandir in Dharmapuri on full scholarship. Krishnan’s education continued to be in Tamil medium and took up Science group with Biology.

Krishnan had no aspirations while at school. All he wanted to do was finish his schooling and get a job in Tiruppur so his parents needn’t have to work in tea plantations.

Krishnan wrote to Agaram foundation explaining his situation and they wrote back asking him to contact them after they finished Class 12.

Krishnan had no aspirations while at school. All he wanted to do was finish his schooling and get a job in Tiruppur so his parents needn’t have to work in tea plantations.

Krishnan scored 1162 out of 1200 in Class 12. His first reaction was to study engineering so he could start working in four years. Medical education would mean he could start earning only after five and half years.

Krishnan had scored 99% in Biology, 96% in Physics and 98% in Chemistry. He was told that these marks were good enough to get him admission at a government medical college. 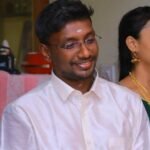 He joined Government Medical College at Coimbatore in 2012 to study MBBS. Government scholarship ensured he needn’t have to pay college fees. Hostel expenses were borne by Agaram Foundation. My family would send Rs 2,000 every two or three months for expenses. “After third year, I started working part-time with doctors and earning money to support my expenses,” says Krishnan.

Having studied in Tamil medium, Krishnan’s first year was difficult since all the learning was in English. Agaram Foundation helped him to learn spoken English at an institute in Coimbatore. In 2018, Krishnan passed out with distinction, scoring more than 75% overall, and got his MBBS.

After graduation, Krishnan was working in private hospitals for a year to prepare for PG entrance during the day. He passed the state service exam and was admitted to government service in March 2019. He requested that he go back to his village to serve people there.

Krishnan’s brother has finished his BSc in Agriculture and is presently driving a taxi while waiting for better opportunities, while his sister has finished BSc in Mathematics.

Krishnan’s parents have finally left their tea plantation jobs and taken up a house near his primary health center to be with him.

Krishnan married his collegemate Kowsalya after getting permission from her parents. Kowsalya was working at the primary health center in Poonthottam in Tiruvarur district and she moved to Nilgiris to and live and work with him.

Krishnan’s aim is to finish his post-graduate studies but once again return to the recently established government medical college in Nilgiris and work there, so he could continue serving his people.