Every Sunday for 25 years, his free coaching has nurtured science researchers

Sundays mean rest days for all of us. It is a time to spend with family and friends and laze around, doing not much. For S V M Sathyanarayana, Sundays mean coming from Kalpakkam to Chennai to help scholarship students of science pass central exams and become science researchers and faculty. He has been doing this for free every Sunday for 25 years, without a break.

Today, hundreds of researchers and faculty across India are thankful to him. Some in turn pitch in to keep his class going if Sathyanarayana is away. A scientist at the Indira Gandhi Center for Atomic Research, Sathyanarayana packs his lunch every Sunday and heads to the nuclear science department at Madras University. His class starts at 10am and ends 5pm.

Some of his students are today at frontline research institutions. Many of them are first generation graduates coming from underprivileged families who studied in Tamil medium.

Sathyanarayana was born in Uppalapadu near Guntur. His father worked at the local primary health centre. Finishing his MSc in Mysore, Sathyanarayana joined IGCAR as researcher. While there, he obtained his PhD and became a scientist. Since 2006, he has been working at the physics department at Puducherry Central University.

He says though many study physics and are interested in it, they are unable to pass GATE and CSIR NET entrance exams. The key is problem solving ability. By training them in problem solving, we can facilitate their passing the exams, says Sathyanarayana who started his classes in 1996.

The key is problem solving ability. By training them in problem solving, we can facilitate their passing the exams, says Sathyanarayana who started his classes in 1996

PR Subramanian, who was professor at the Madras University nuclear science department, supported his aim of teaching underprivileged students. He arranged to provide him a hall at the university.

Though the class happens in Chennai, science enthusiasts from Pudukottai, Vadavasi, Tiruvannamalai, Salem and Dindigul come here every week to attend. The numbers vary. But on an average, 30 students come every week.

Hearing about his effort, Rajasekaran, retired professor at Matscience Institute, and HS Mani, retired professor at IIT-Kanpur, came forward to conduct classes. His former students and nuclear science professors also pitch in. University authorities have been providing their halls to him for all these years.

One of the students in his class was Annalakshmi. Hailing from Ammandivilai in Kanniyakumari district, she studied Class 12 in Tamil medium. Her father was a daily wage earner. Annalakshmi finished her PhD and is today working at IGCAR. She became Sathyanarayana’s life partner. 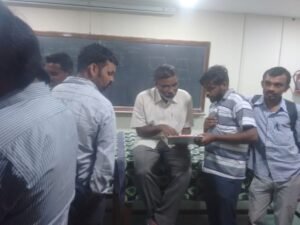 Vijayakumar studied in a government school in Udumalapettai. Having come for summer internship at IGCAR, he started attending Sathyanarayana’s classes. He is today a researcher at the Defence Research Development Institute (DRDO).

Pon Murugan studied at Pachaiyappa’s College. He is the first student from the college to pass the CSIR exam and is today faculty at Tiruvarur Central University. He has done post doctoral research in the UK. Such stories are many among Sathyanarayana’s students who work at the Indian Institute of Science, Tata Institute of Fundamental Research, Bhabha Atomic Research Institute, the IITs and so on. Some are continuing their research abroad, too.

“Many of his students studied at government schools and colleges. He won’t badger them with questions and make them feel embarrassed in class. He would be gentle and take them along and encourage them. They would very quickly catch up. Theoretical physics is a tough subject. Many of his students are pursuing research in it,” says Joseph Prabhakar, one of his students.

Many of his students studied at government schools and colleges. He won’t badger them with questions and make them feel embarrassed in class. He would be gentle and take them along and encourage them. They would very quickly catch up

When Sathyanarayana went to Germany for post-doctoral research, his alumni and others took turns to teach here to keep the classes going. During Corona, the classes moved online. Offline classes are expected to commence in January.