Kamal Haasan is Covid positive. Is a third wave brewing?

Bigg Boss fame Kamal Haasan is infected with COVID19 and under self-isolation in a hospital. A fully vaccinated Haasan getting infected has shocked his fans. The actor has duly warned the public that the pandemic is far from over. Meanwhile, the state has relaxed most of the restrictions and near normalcy has returned. It appears people have forgotten the horrors of the second wave and threw all the caution behind. Not many are seen wearing masks or following physical distance. Of late, Tamil Nadu also witnessed spirited celebrations of Deepavali. With fully vaccinated people getting infected again, could there be a third wave brewing at our backs? If in case of a third wave, are we prepared? Inmathi talks to Dr Farook Abdulla, MD Pharmacology over these questions for clarity.

Question: You would have learnt Kamal Haasan getting infected with COVID19. What is the status of the pandemic?

Abdulla: The pandemic has gone from the stage of the epidemic to endemic. It means, the disease is out there but not at an alarming proportion of an epidemic. However, individuals would still get infected. The disease can still return if the powerful variants like we had Delta variant in the second wave causing so much destruction. The variant can mutate into either favourable or unfavourable. We may aid this mutation by not taking adequate precautions. So it is advisable to be careful and take adequate precautions against COVID19.

Question: Kamal Haasan was fully vaccinated, yet he was infected. What are the chances of getting infected even after vaccination?

When people are fully vaccinated, the situation won’t progress to suffocate the health system as it happened in the second wave since the vaccinated people won’t be requiring hospitalization much 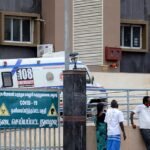 Question: With all the caution thrown into the air, is there a possibility of a third wave of COVID brewing?

Abdulla: Last year this time, we were in the exact situation of throwing precautions away when the second wave struck us. But we are better prepared now. Intensive vaccination drive and exposure to the virus during the second wave would be an advantage to us. The chances of such a deadly wave like the second wave at the end of 2020 sweeping us again are less because of vaccination and the herd immunity we have developed.

Question: Talking about vaccination, there seems to be a hesitancy to get vaccinated in Tamil Nadu. How do you see this?

Question: If in the case of a third wave, how prepared are we? Is the state government ready to face such a situation?

Abdulla: The second wave has taught us precious lessons. We have now improved our infrastructure. The oxygen supply has been streamlined and oxygen generating and concentrating facilities are improved.  Compared to the second wave, we have adequate beds in the hospitals. Tamil Nadu has a robust health infrastructure now. Another advantage is that our health staff are well prepared to handle the contingencies. Besides, we have vaccinated at least 80 to 90 percent of the population and the second dose of vaccination is in process.