“Music has only seven notes – Sa Ri Ga Ma Pa Dha Ni. There is nothing new in what we musicians create. All that we do is a permutation and combination of these same, seven notes. One who manages to fool the people by mixing these notes is a wise man (Gnani). One  who fools the people even more is considered a Musically Wise one (Isaignani)”, was maestro Isaignani ( Ilayaraja’s) description of himself!

On another occasion, Ilayaraja said music composed by him and his colleagues was nothing more than a legacy of alms given to a beggar by greats like G Ramanathan, K V Mahadevan and  and Viswanathan Ramamurthy. “Music directors like us are nothing more than beggars”, he would say. ‘Music directors like me live and prosper with the saliva that they spat out”, burst out Ilayaraja at a live music programme watched by millions of people. 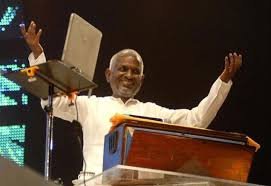 He has also said that phenomenal music directors like G Ramanathan, C R Subbaraman, T G Lingappa and many other geniuses like them had worked hard to build roads and tarred roads for the music industry. “Today, it is easy for music directors like us to travel on these tarred roads in AC cars”, Ilayaraja would say. He would never hide the inspiration for his songs. In the film Rajakumaran, SPB renders a brilliant song Ennavendru Solvathamma. Yet, there is a reference to a Viswanathan Ramamurthy number Athaiyadi Methaiyadi a few scenes ahead in the film. The SPB song was a take-off on the P Susheela number. That was Ilayaraja’s way of paying his tribute to the Mellisai Mannargal, even preparing us to recall VR.

While the world hails Ilayaraja as a musical wizard or genius, he doesn’t rate himself highly. There are several such instances of humility at rare interviews or public appearances that sets Ilayaraja apart from other music directors.

“Music directors like me live and prosper with the saliva that they spat out”, burst out Ilayaraja at a live music programme watched by millions of people.

Yet, to a section of the film industry Ilayaraja has been arrogant and haughty. This image has been in sharp contrast to the instances of humility mentioned above. Why did this happen? Any creative person is basically proud of his or her work. Without such pride, it would be difficult to attain great heights. While Ilayaraja would do his best for a song or a film situation, producers and directors who had no idea of music would pronounce judgments on what was a good song or a bad one. It was this situation that riled Ilayajaya and forced him to make comments that seemed to emanate from arrogance.

This situation was exemplified by actor-director Nasser who explained that when Ilayaraja first gave an outline for the song Thendral Vandhu in Avadhaaram, he was disappointed and said so in so many words. Nasser said he had hoped to present a good song as a sales pitch for his distributors. Ilayaraja asked him to come back to the studio in the afternoon. When Ilayaraja presented the full version of the song with the chorus and the orchestra pieces, Nasser was stunned by its overwhelming beauty and virtuosity, and said who are we commoners to tell him what kind of song should be composed. “We directors should leave music to him and not try to impose ourselves,” Nasser would point out.

How did Ilayaraja reach cult status? (To read second part of this story)

(Email your comments to editor@inmathi.com)