Share the Article
I had listened to his cassette tapes when I was very very young — three to four years. I was fascinated by the sound that came from his instrument and that was before I became inspired by his music. As a child, I imagined how he would look on stage based on his smiling face on the cassette cover. 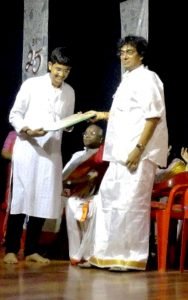 He looked more radiant, happier on stage than the photograph on the wrapper. Mandolin Shrinivas gaaru was a person to be cherished.

I got to meet him personally when I was eight years of age. We had approached him to be the guest of honour for my first album titled Carnatic Music on Keyboard Volume 1, in 2008.

I played the keyboard to him and he appreciated me and agreed to come for the event. The sessions I had with him under his tutelage when he taught me krithis were indeed priceless moments of my life. He could share his experience and skill with even a nine-ten year old such as me. It was such a joyful time that it was like a storytelling session for me.
He was a perfectionist in music and made me understand the nuances of his playing and wanted me to get that on keyboard. It was an unexplainable feeling to be with him, hear him, see him and talk to him. The sound I heard from his experiment only he could produce.
In the earlier yamaha keyboard i used, I had a tone called PedalSteel Guitar along with another tone to give it a very unique sound. After I got my first Korg keyboard,  the customisation I preferred was jazz guitar. Shrinivasji also liked this tone very much and said it was very pleasing to the ear. Shrinivas gaaru’s music has made a huge impact on musicians and music lovers around the world. He has brought many then unknown songs to the limelight. Those who attended his concerts would request songs like “Entha muddho” , “Nagumomu” ,etc which sounded amazing when he played. He played a Sai bhajan in almost every concert of his and my favorite songs of his include Adamodi Galada, Entha Muddho, Venkata Chala Nilayam and O Rangasayi, to name a few.
He had his unique style of presenting Carnatic music. His raga pattern, the impromptu sangathis he played, and the kalpana swara patterns were very unique. He showcased the beauty of the instrument and the music in a complementary way. He always made even the most difficult ragas or swara patterns sound so easy that even a layman could enjoy the music from Shrinivas gaaru.
The band Shakthi, along with John Mclaughlin, made a huge impact on the world. Shrinivas gaaru took the instrument to a whole new demographic and they started to relish and appreciate Indian music through him. He has collaborated with legendary musicians around the world and left a stamp of his own. He was among the greatest ambassadors of Indian music and culture to the rest of the world.
His music gave me so much joy and peace. The meaning of aesthetics, the character and attitude a musician should have on stage, encouraging the co-artists, and performing as a team are a few key aspects I learned from him.
An unforgettable event was both of us being awarded by Bharat Kalachar on 26 November 2011. He was awarded the Vishwa Kala Bharathi and I, the Yuva Kala Bharathi. He presented the award to me with his own hands.