In Cobra movie, Mathialagan, played by Vikram, is a socially conscious man who teaches poor and other children lacking support so they can advance in life. College teacher Bhavana (Srinidhi) loves him but Mathialagan doesn’t return her love.

Vikram is not only a maths teacher he is also a murderer who uses high math to succeed in his killing spree. He flies all over the world and assassinates people as per directions given to him by Nellaiappan, played by K S Ravikumar, who is based in Kolkata.

Among Mathi’s victims are Odisha chief minister and a prince of Scotland (Does Scotland have a prince?). These draw Interpol’s attention. A student of Bhavana, Judith (Meenakshi), writes to Interpol saying the killer must be trained in maths. For this, she becomes part of an Interpol team headed by Aslam (Irfan Khan) tracking the killer.

Meanwhile, a computer hacker creates a buzz that Russia’s defence minister is going to be assassinated. The hacker exposes not just Nellaiappan but also a corporate head, Rishi (Roshan Mathew), who are behind these. Rishi then decides to take down whoever knows his secrets.

The hacker gets into the Russian defense forces’ network and gauges that Mathi is already in Russia. Aslam is on to the job of tracking down Mathi and stopping him. The rest of Cobra movie deals with the identity and motives of the hacker, Rishi’s villainous deeds, and Mathi’s mind.

Cobra is the name given to Mathi by Judith. The snake in the film’s poster has two heads but conjoined. With this suggestion, the film goes for a break – the interval.

Also Read: Success of Vikram 2022 is the loss of Kamal the politician

The rest of the movie suffers from lack of clarity. It’s possible the cuts engineered to keep the movie’s length under control made the narrative disjointed.

Ajay Gnanamuthu, the director, doesn’t seem to have the screenplay under control. He has let go of opportunities to flesh out Cobra’s character and provide weight to crucial sequences. Former cricketer Irfan Pathan comes out creditably. He is among more than a dozen characters in the story.

Roshan Mathew’s psychotic villainy is not new to Tamil films. But Vikram’s boldness should be appreciated. In Anniyan, he played a multiple personality type, while, in Pithamagan, he played a social outcaste. In Deiva Thirumugan, he plays a mentally challenged person while in Cobra, he plays a schizophrenic.

After Cobra, Vikram may need to focus not just on his role, scope and space but also in the overall story and screenplay’s merit before choosing films.

Vikram’s sequences recall Aalavandan of Kamal and Dhanush’s 3. But unlike those films, Cobra’s affliction is portrayed as a positive.

Vikram understands he is ill but allows it. He sees characters in his imagination who make his personality and plays along. His life is influenced by people only he sees. John Nash, a pioneering mathematician portrayed in A Beautiful Mind, was a schizophrenic who coped with his illness by accepting his imaginary characters. Cobra movie seems to have taken inspiration from Nash.

Cobra’s technical aspects are first class. So is the background music of A R Rahman although the songs are not a value addition. 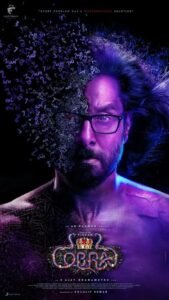 Ajay Gnanamuthu has been helped by many in the screenplay. But Mathi remains a character whose full scope is not fleshed out. This weakens the film. Mathi’s relationship with his mother is a loose end. So are Rishi’s business plans. The saving grace is Vikram’s acting though.

Besides Vikram, Anandaraj draws our appreciation. Is he real though? Cobra doesn’t quite flesh out why the people in Mathi’s mind affect him so much.

Most filmgoers will come out of the theater praising Vikram. But that may not be enough for them to go back and see the movie once more. A repeat audience is often the guarantor of a film’s success.

Cobra is three hours long. But the films, Vikram and KGF 2, showed that length is no obstacle to sustaining audience interest. Repeat audiences ensured the success of Vikram and KGF 2.