When is a freebie welfare expenditure?

A three-judge bench of The Supreme Court of India, headed by  Chief Justice M.V. Ramana, has been hearing a Public Interest Litigation (PIL) petition, filed by Ashwini Kumar Upadhyay, a member of the BJP, which sought a direction to deregister  parties that promise irrational freebies in their election manifestos. Senior advocate Vikas Singh appearing for the petitioner has suggested a ‘model manifesto’, which could effectively curtail the announcement of freebies, as a feasible solution. This has made headlines in the newspapers twice this month.

On August 3, 2022, newspapers reported the discussion held in the SC on August 2, 2022. The Election Commission of India filed a counter to this petition stating that it did not have the powers to regulate parties on the issue of freebies. The Union government through its advocate submitted that freebies distorted the decision-making of voters and that it would be an economic disaster if allowed unchecked. The Union government also supported the petitioner in principle and wanted to find a solution.  Referring to a judgement of the SC in 2013 on a similar case, Justice M.V. Ramana lamented that neither the ECI nor the Union government had decisively acted on this matter.

The SC was firm that the freebies had to be controlled and it wanted to find a solution. Senior Advocate Kapil Sibal, who was in the court at that time, when asked for an opinion by the court, suggested that it was an economic and political issue and should be left to the legislature to decide. The SC categorically stated that neither the politicians nor the government would be interested to debate this issue. The SC was also not impressed with the suggestion of formulating a  ‘model manifesto’ as it would be one more empty formality to follow. The SC wanted the ECI and Union government to submit a report on how the stakeholders could be involved to dispassionately consider this issue and to give a report in a time bound manner. The SC even wanted the Union government to report whether the Finance Commission could be asked to look into this issue and that the financial transfers from the Union to states could be regulated based on the expenditure on freebies.

On renewed hearing of the ‘freebie petition’ on August 11, 2022, the SC talked in a slightly different tone. It recognised that all welfare schemes could not be described as freebies, while recognising the need for some financial discipline in regard to election promises. The SC stated that it would not entertain the main plea of the petitioner to deregister the political parties that promise freebies. At the same time, the SC was also perfect in clarifying that the court would not recommend the parliament to frame laws, but wanted the stakeholders to discuss this issue and it wanted the ECI, Union government and other parties to this petition to file written submission by August 17, 2022.

Between the first hearing on August 2, 2022 and second hearing on August 11, 2022 the SC has changed its stance from criticising the unqualified freebies to qualified freebies like differentiating between welfare expenditure and freebies. It also wanted to know the fiscal implication of announcing such freebies and the capacity of states to finance such expenditures. Now a broad-based committee with members from all possible groups of stakeholders like political parties, Union and state governments, independent thinkers in economics, politics and law and society and many other institutions should be constituted. It will be too big to iron out differences and come to a unanimous recommendation.

Already thinkers and political parties have started airing views on this issue. The Aam Admi Party has filed a petition in this case asking SC to consider only setting limits for expenditures but not to decide on freebies as it would amount to interfering with the functioning of political parties. Welfare expenditures such as education and health should be differentiated from expenditure on providing goods and services that directly add to wealth or income stream of the recipients. The provision of articles like mixie, wet grinder, cycles, TV sets and many more are being classified as ‘pure’ freebies.

Similarly, the heavily subsidised or free electricity to agriculture or domestic consumption is also being critiqued as it amounts to adding to the income stream of the recipients and also creating environmental damage like over-exploitation of ground water and excessive use of fossil fuel for additional electricity generation. How much of a cash transfer like subsidy for domestic LPG connections can be considered as welfare expenditure? Does it generally mean full subsidy is a freebie and a partial subsidy is welfare expenditure? Moreover the line between welfare expenditure and freebies is blurred to the extent we can conceive the effects of such expenditures.

If expenditures on freebies could be considered as wasteful expenditures as they do not produce any collective benefits for the society, then inefficient expenditures on social sector can also be classified as wasteful expenditure. State governments are known to provide food grains to either targeted or all households at heavily subsidised prices. The leakages are substantial in the public distribution system. We have ample experiences of ineffective expenditure on schemes for welfare of people, particularly for the socially, educationally and economically excluded sections of the society. Should we classify  parties’ promise to provide food grains at subsidised price as a freebie? 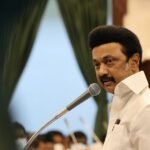 Chief Minister M K Stalin has called for a debate on what are freebies and what are legitimate welfare expenditure (Photo Credit: Twitter- @mkstalin)

Any political party that announces increase in social sector expenditures should be condemned for the same reason of wasteful expenditure of scare resources. A conscious taxpayer will be indifferent between an efficient freebie of distributing private goods and inefficient welfare expenditure that will be considered as waste of scare public money.

When welfare expenditures are inefficiently carried out by the governments, does it amount to freebies as the intended impacts on the people are not realised?  No. The inefficient welfare expenditure is more due to bad governance rather than misplaced welfare priorities. When many of the transfers in kind are being replaced by cash transfers which effectively enhances income but not welfare through desired consumption, the welfare expenditures should also be seen through the lens of effectiveness. The political debate should be on making the welfare expenditures effective in terms of having the desired impact on the society or on the targeted sections. Similarly, the expenditures on freebies that are for distribution of private goods should be decided on the basis of impact such expenditures makes in the lives of the recipients. Obviously such decisions lie  on the shoulders of law makers and public intellectuals who could debate the impacts and guide  public policy. Little can be achieved through any other form of intervention.

We have ample experiences of ineffective expenditure on schemes for welfare of people, particularly for the socially, educationally and economically excluded sections of the society

It is fashionable just before elections to talk about vote buying through distribution of monies or, as being discussed in the SC, that voters are constrained to vote for particular parties based on promises of distributing private goods at public cost. So far, it has been elusive for political scientists to conclusively prove either vote buying for cash or the vote swings in elections that could be attributed to freebies. For instance, though the Samajwadi Party (SP) distributed goods and grants during its administration in Uttar Pradesh in 2012-17, still it lost the election in 2017.

The Dravida Munnetra Kazhagam (DMK), though accused of capturing power on the promise of freebies in 2006, had fulfilled most of such promises. With a track record of fulfilling election promises, the DMK promised many more such things on the eve of the 2011 election. Tamil Nadu voted out the DMK in 2011 and elected the AIADMK, which also promised many freebies in that election. Neither freebies nor the track record of fulfilling such promises in both the cases of SP and DMK could help such parties to get re-elected.

With little difference between freebies and welfare expenditures and unclear link between promises of freebies and the decisions of the voters, it should be left to the wisdom of the legislature rather than constructing other processes to constrain political parties to promise distribution of private goods at public cost. It will once again result in some regulations that would be adhered to more by breach.

(R Srinivasan is full time member of the State Planning Commission, Government of Tamil Nadu. S Raja Sethu Durai is professor of economics at the University of Hyderabad)