One thing that Rocketry certainly does is to show that just like the movie’s theme, the image or what is initially thought to be true is rarely ever so. The image of Madhavan as an aging chocolate-boy – the 50+ boy known as Maddy – is not the entire truth.

Directed and written by Maddy turned R Madhavan, Rocketry gives a bird’s eye view of a man’s life that was perceived variously at various times – as traitor to the country to patriot. Rocket scientist Nambi Narayanan’s life would be hard to be pinned down as a series of sureshot events. Madhavan keeps the ambiguity without ever slipping away from the idea of a commercial film.

Nambi Narayanan was one the most senior scientists in the Indian Space Research Organization (ISRO). He was in the second rung – the top being luminaries such as Vikram Sarabhai, Satish Dhawan, APJ Abdul Kalam and others. He studied at Princeton University and had a NASA job waiting but returned to India.

Nambi Narayanan was devoted to the development of liquid fuel engines for rockets. The older solid fuel engines had some issues such as not being able to control their burning. Liquid fuel engines could be stopped, started or throttled much better. This would be a step change in India’s space prowess. If the gaseous fuels could be stored at very, very low temperatures, of the order of -180 C and below, then they could be in the form of liquid. Liquids occupy much less volume than gas so they need far less space to store.

The US didn’t want India to develop this system saying the technology could be used in missiles.

Because of the low temperatures, the engines were called cryogenic engines. Such engines are highly efficient but the system of storing, transporting and using these fuels is complex. India wanted to develop this system and have it for itself.

Amidst all the geopolitics, science and technology was Nambi Narayanan who was determined to develop the technology so the ISRO could be a commercial going concern in the future. Many have said India’s cryogenic engine development programme included a substantial amount of reverse engineering of the Soviet engines and developing the technology from the finished product.

Much has been written about Nambi Narayanan and he himself has penned an autobiography. The film does full justice to the research that would be needed to make a biopic such as this. In an informal interaction with journalists at a Chennai newspaper office in the mid-2010s, Nambi Narayanan said he suspected the hand of the CIA behind what had happened to him although he couldn’t prove it. The film shows that a shadowy American monitored every step of his life right from graduating from Princeton up until he being tried in court. Yet, the film only suggests this without directly implicating the US. For the police record Nambi Narayanan was a spy for Pakistan – a Maldivian woman was supposed to be the link.

Nambi Narayanan was arrested and tortured by the police and spent 50 days in jail. Nambi Narayanan suddenly became a reviled figure in public opinion. His humiliation was complete. His life was irreversibly damaged and could never recover. His family was devastated. The film’s message was that nobody should go through such an ordeal. 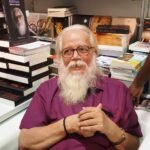 The research shines through when the film talks about how Nambi Narayanan’s colleagues perceived him. Nambi Narayanan had his shades too. There were times he flirted with the darker aspects before the dark side consumed him.

As student in the US, Nambi Narayanan did not shy away from Indian jugaad to gain unfair advantage. He gained the confidence of his professor by offering to be useful around their house and bringing a smile to the professor’s sick wife. Later, as if providing a foreboding, an older Nambi Narayanan hinted to his family that despite his age his virility could not be questioned.

Nambi Narayanan conspires with other scientists in a secret, dubious mission to develop the cryogenic engine. He upends American watchfulness in developing the engine. He hides the news of the death of his colleague’s baby from him so the man would continue working in the project. But these are not shown as the doings of a smarty pants scientist but as James Bond-like initiatives. A man who could give a cheeky response to Vikram Sarabhai had to face people’s disgust later in life. Madhavan portrays all of these.

Maamanithan: Thumbs up to a simple film upholding simple life

83: We Tamils are Srikkanths. Mind it!

As an actor, Rocketry must rank below Madhavan’s Irudhi Suttru. But when he seeks forgiveness from his wife for not being a good father or husband, many layers are revealed.

Madhavan seems to be a careful observer. As someone who performed in classics under the baton of some of the most well known directors, Madhavan seems to have absorbed the essential lessons of filmmaking. This helps the screenplay remain engaging and interesting.

Rocketry deals with high science but it carefully avoids being stuck in the science nuances.

The first half of Rocketry is Nambi Narayanan’s high flying and the second half is his fall. The gripping moments make Rocketry a commercial entertainer. Rocketry deals with high science but it carefully avoids being stuck in the science nuances. Rocketry is not didactic nor educative but the viewer at best comes away with the idea that what Nambi Narayanan wanted to achieve was important for the nation.

It may sound clichéd. But Rocketry is certainly well served by the supporting cast of actors. Simran, Misha Goshal and Ravi Raghavendar shine.

Just like Kamal Haasan, Madhavan has learned filmmaking just by being there in the film industry for many years. His long career has taught him enough to know and apply the ruses.

Madhavan has always come across as an intelligent and thoughtful person in interviews. He had never shown himself as a Hindutvaite any time in the past barring the gushing admiration for Narendra Modi in Cannes. But his ideas are generally too nuanced to fit into a straightjacket.

So what explains his panchangam gaffe? There is no panchangam in the film. Nambi Narayanan’s religiosity is not relevant. Perhaps for the sake of detail, Madhavan appears with a bright red tilak later in life that Nambi Narayanan used to sport.

Was the panchangam episode Madhavan’s ruse to create free pre-launch publicity? If it was, he has certainly learned another trick in the film industry.