It is a Tamil medium school with a difference. Functioning in Kurichi village 7 km from Pattukottai, the school, run by the Indian Bank Employees Association Trust does not torture the students with homework, and neither does it terrorise them with rank cards. Even before it was prohibited by law, sparing the rod has been the practice here.

Launched as a middle school by N. Sankariah, a veteran Marxist Communist Party leader, and S. Muthukumaran, former Vice-Chancellor of Bharathidasan University, on June 12, 2002, the school has been running successfully for the past 20 years, and it is now a high school. 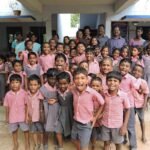 Initially there were, in all, 160 students in classes ranging from LKG to Class 6 when the school was established on a 5.5-acre site on behalf of the Indian Bank Employees Association affiliated to the Bank Employees Federation of India. The members of the association had contributed to the establishment of the school, each chipping in with four days’ salary.  Not lagging behind, several people have rendered help to run the institution.

Launched as a middle school by N. Sankariah, a veteran Marxist Communist Party leader, and S. Muthukumaran, former Vice-Chancellor of Bharathidasan University, on June 12, 2002 in Kurichi village, 7 km from Pattukottai, it is run by the Indian Bank Employees Association Trust.

Students from 33 villages around Kurichi, most of them children of farm workers, study in this State Board school, quite comfortable with instruction in Tamil. In fact, the school itself has arranged transport for the students.  Efforts are on to teach them English too, said G. Balachandran, school correspondent, adding that LKG, UKG and Class 1 are all clubbed together into a single class and the students have been spared the rigid norms of wearing shoes and ties. Education with compassion has gone down well with the students who are taught several skills to mould them into multifaceted personalities, said Balachandran CM Stalin gives books
“The school boasts a library of 4,000 books. Chief Minister M. K. Stalin has contributed 200 books. The school goes out of its way to inculcate the reading habit among students and hone their writing skills. It’s a practice here to give students papers and inspire them to write on whatever topics they choose. Moreover, members of the Tamil Nadu Science Forum teach science-related topics to them. The students, who have already imbibed values of environment protection, grow trees on the school campus. During the Gaja cyclone, several trees on our campus were uprooted and we have begun growing new ones,” he said.

Noted personalities, such as dramatist S. Ramanujam and organic farmer Nammalvar have visited and interacted with the students. Some students have done the school proud by winning young scientist awards.  In 2006, student Rangarajan received the young scientist award from President A.P.J. Abdul Kalam at the Children’s National Science Conference. In later years, students Raghuvaran and Iniyavan also got the award.

Raghuvaran, in an article he wrote, suggested that more water could be stored by desilting the lake on farm land in a particular area.  The school prides itself on the fact that the distinguished student’s article impressed the then District Collector Radhakrishnan so much so that he ordered desilting of the lake through the PWD.

“As fees are kept low, we have to mobilise Rs. 18 lakhs every year through donations from philanthropists. It’s only with such humanitarian help that we are able to sustain the school,” said Balachandran.

During the coronavirus disruption, when schools remained shut throughout the country, teachers from this school visited the villages in person and took classes for the students from July 2021.

During the coronavirus peak, when schools remained shut, teachers from this school visited the villages in person and took classes for the students from July 2021. The open air classes were conducted on terraces or in public places.

“There was a good response from the students and parents to this initiative. Their appreciation translated into a higher enrollment. In fact, the credit goes to our dedicated teachers,” said Balachandran