After Amby, Contessa to come back in Tamilnadu?

Hindustan Motors may well be considering reviving the Contessa through its Tamilnadu plant, given that the company recently trademarked the Contessa nameplate.

When the global car community talks about a muscle car, minds wander around American muscle cars. The iconic Ford Mustang, the beastly Dodge Challenger and the ungodly Plymouth Barracuda are a few muscle cars that come to their minds.

These cars are among other American muscle cars that pack gas guzzling, ground rumbling powerhouses under their bonnets. The heavy and wide bodies of these cars portray them to always have an intimidating stance!

In the Indian context, there was once a muscle car that made heads turn. The Contessa was brought to the country by HM (Hindustan Motors), the same company that made the legendary Ambassador. The Contessa rolled out of HM plant in Tamilnadu. Back in the day, the Contessa had set standards in India for safety, luxury, power and prestige. And now, there’s a hint that the legacy of the Contessa will continue.

Just recently, Hindustan Motors announced the revival of Ambassador in a conventional as well as a fully electric avatar. Their partnership with PSA (Peugeot) Group will make the great Indian dream of witnessing newer Ambassadors a reality.

The plant established in Thiruvallur will manufacture not only Ambassadors but also electric two wheelers. HM’s grand plan possibly involves the manufacture of Contessa there as well.

Hint of the updated Contessa
Research by an automobile enthusiast probably working in the Trademarks department of ‘Intellectual Property India’ found something interesting. It was revealed that Hindustan Motors Limited has patented the ‘Contessa’ nameplate on 16 March this year as published in the Trade Marks Journal.

Although HM did not announce that they will revive the Contessa, it appears that the company wanted to inconspicuously surprise the Indian auto enthusiasts later in time about the revival. The information on the Trade Marks Journal however, fell into the right (or wrong) eyes.

After Hindustan Motors’ recent announcement of relaunching the beloved Amby, their clue for a potential future of Contessa is a revelation for most admirers. At this point though, we are still not sure what the company plans to do.

History of the Desi Muscle Car
Who says a muscle car must have a powerful V-8 engine roaring? The sheer looks of the car could also make it a muscle car.

In the modern age, even the well known Ford Mustang comes in a 2,300cc inline 4 engine avatar. As compared to the more powerful siblings of the Mustang, this 2.3 litre variant is just a puny pony.

Taking that into consideration, the Contessa was way ahead of its time in India when it was launched in 1984. Although the Contessa looked like a close relative of the Dodge Challenger, its design was derived from the lesser known British car brand ‘Vauxhall’. Vauxhall (pronounced ‘vox-all’) agreed to ship tooling equipment to India after Hindustan Motors made them an offer they could not refuse. For a whopping price of 1.5 million British Pounds back in 1980, HM bought the rights and blueprints to manufacture the particular Vauxhall model in India.

Vauxhall’s ‘Victor FE’ was then made in India by Hindustan Motors and rebadged as Contessa for our country. Initially, the Contessa was powered by an underpowered 1,500cc 4 speed British engine which the owners despised.

Hindustan Motors addressed their concern by ditching the old and obsolete British engine for newer and more powerful Japanese engines. Since 1986, HM made 1,800cc Isuzu engines in India to suit the Contessa. In just four years, the 2.0 litre indigenously built Isuzu diesel variants followed. One variant, the Contessa Classic even had a turbocharged 2,000cc engine. It was promoted by HM as the best car for hitting the highways. Ever since, constant revisions to the vehicle only made it more appealing to Indians. Air-conditioning, power windows, wooden dashboard, power steering and armrests among other features made it the best self-driven or chauffer driven luxury car that time.

HM also introduced the “Slumberette” feature that involved making a single bed inside the car. The collapsible front passenger seat coupled with the rear seat behind it made a perfectly good bed to snooze or just lounge.

The sharp looks, twin headlamps on either sides, a mean looking front grille and spacious interiors are what made the Contessa click in India.

In the Indian Cinema
From Bollywood to few movies from South India, the Contessa was a superhit. Tamil actor Thalapathy Vijay drove a blue one in his recent film, Master. A Telugu movie from 2018 ‘Taxiwaala’ featured a matte black Contessa. Although the story needed the car to be possessed, they had showed off the car in many dedicated movie and music scenes. This Contessa was featured in the pre-release event of ‘Taxiwaala’.

In a Kannada movie ‘Kirik Party’, the protagonist is seen driving a yellow Contessa converted to a cabriolet. The roof was chopped off, thereby ruining the original look. But the movie showed that the Contessa looks good as a cropped-top too!

Many Bollywood movies flaunted the Contessa as a mobster’s car or even a car for high ranking government officials. The status symbol for people in the 1980s and 1990s was always to have a Contessa in their garage.

The future for Contessa
Once the car is launched in its new avatar, it will most probably have an internal-combustion engine variant that will be released just like their plans for Ambassador. Taking a cue from HM’s plans for the Amby, the EV version of the cars will follow suit is what our presumption is.

The renders for Contessa look promising but could be better. They don’t quite hold the essence of a muscle car. On the other hand, the Ambassador renders looked more like one.

The new Contessa will be a statement of luxury. Since it is most likely to be built indigenously in Chennai, affordability of the car will be matched with other cars of its class.

This render created by a Kerala based company Mighty Seed gives it more of a coupe look with the sloping back. We trust HM to come up with a better design.

The front of this design, however, is something to look forward to. The new Contessa will be a statement of luxury. Since it is most likely to be built indigenously in Chennai, affordability of the car will be matched with other cars of its class.

Having known Hindustan Motors for their earlier cars to be sturdy and built without compromise on safety, the company might still make new cars as hardy as the old ones. With growing thresholds in safety standards of India atleast in the luxury car segment, the Contessa has to thus prove its name in the crash tests. 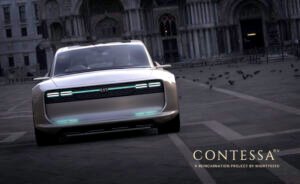 HM also has the potential to export their Ambassador and Contessa models.

Ford recently introduced the fully electric Mustang that will soon be future ready. HM is certain to put India on the charts of fully electric muscle cars. Moreover, muscle car enthusiasts and purists in India will most probably see a petrol/diesel variant that could match their worthy predecessors.