Media reports suggest that the Sri Lanka food crisis has reached such a point that starvation deaths on Colombo streets may be seen in October if urgent measures are not taken to improve the situation. Social and human rights activist Tharmalingam Ganesh, however, says the newly formed ministry is not taking steps on a war footing. He spoke to inmathi.com

How has the situation changed with change in government?
When Ranil Wickremesinghe took over as Prime Minister, Japan, India, the US and other nations promised billions of dollars worth support. While that offered some solace, the economic crisis continues. Not much has changed. Prices are sky high. People stand in line for 12 hours to buy the LPG cylinder.

University students are continuing their protest in cities. In villages, common people are protesting.

At fuel sale outlets, fights and attacks on vendors are happening almost on a daily basis. The house of the owner of an outlet was burned down. For that reason, police and army protection has been given to fuel outlets. Protesters are keenly watching the functioning of the new cabinet. 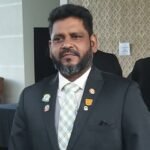 Are essential commodities available now?
Price of essential goods are up 200% to 400%. The timings of the shops are regulated. We get to know their opening on social media.

Milk powder is scarce. People have been pushed to standing in line for 10 hours to get five litres of kerosene.

Only 10% of fishermen are going for work. Only 20% or private buses are being operated.

Are starving people waiting in lines?
In Colombo and other cities there is much hardship. Because of the high prices people are losing the ability to buy food. We are seeing people returning empty-handed from the market because they just couldn’t afford the prices. The Sri Lanka food crisis has reached a critical point.

At 10pm, some 400 of the 2,000 people waiting in the front of the line get LPG. Others return angry. Though with money, they are unable to baby food. Families who went to India because of shortage of medicines are returning because of the devaluation of currency and not being able to afford treatment.

Are there any positive signs?
There seem to be none. On the contrary, inflation is runaway. Yesterday’s prices are not there today. Tomorrow’s prices will be different. You are lucky if you can purchase anything. There is no guarantee things will be on the shelves next day.

The statements of Prime Minister, ministers and officials are worrying. They are saying there is a possibility of famine. They are asking people should eat two meals a day, not three. Officials are working only four days. On Friday, they have been asked to raise gardens in their houses. Meanwhile the president has announced there will be no reduction in workforce in government nor in defence.

People are watchful for ships from various countries that have extended credit. But there is a worry what’s coming in will not be available for common people because ministers and officials have been found to be hoarding.

How have Tamils been affected?
Loss of income is extensive among Tamils. Expenses have mounted. Tamils experienced severe shortage of food during the civil war, so it’s believed that they can handle the situation. But the gap between income and required expenditure is so big now.

Families of militants, families of the disappeared, families that lost their fathers and brothers in the war, and those suffering from poverty now have to deal with the Sri Lanka food crisis in addition. At the same time, abduction of children in the north and the east has increased. Theft and burglaries have increased. The government is now requesting the diaspora to help.

Tamil Nadu sent some relief. Were they distributed properly?
The first shipment brought food items. These were distributed all over. People are not told these details transparently.

Are migrants living in other countries coming forward to help?
The Tamil diaspora is highly divided socially, in terms of the province they came from, caste groups they belong to, which militant group they identify with and so on. If these barriers are broken and there is unity in purpose and action, then we can see results. The idea of Eelam can unify. But Sinhalese majoritarianism has always been hostile to the Eelam demand.