‘Tamil Nadu Defence Corridor a non-starter due to state govt’

The Tamil Nadu Defence Corridor project is a prestigious project of the Union government that has not left the drawing boards because of the attitude of the state government.

India’s defence and aerospace sector has been growing in double digits (10% CAGR) as compared to the global growth of 4%. However, much of the spend has been going towards imports. For instance, more than 80% of aerospace industry components are still imported.

In recent years, several steps have been taken to reverse this trend by developing and levering the capacities of local industries. The launch of Aatmanirbhar Bharat Abhiyan has given a moral boost to the MSMEs but a significant shift is yet to happen.

Some of the major policy changes brought in recent years include Reform in Defence Acquisition Procedure, 2020. Under this, the defence sector has been earmarked 64% of its modernisation funds (Rs.71,000 crore) for procurement from domestic industries, and FDI limits were raised with an automatic route for 74% for new investments.

Further, India had reserved defence equipment and machinery for the public sector, but now it has opened up to 100% for Indian private sector participation. A total of 333 private companies were issued a total of 539 Industrial Licenses. Out of these, 110 companies have begun commencement of production.

Moreover, two important steps were taken by the Defence Ministry which has notified two ‘Positive Indigenisation Lists (PILs)’ with a total of 209 items for which there would be a restriction for import. Two Defence Industrial Corridors, one each in Uttar Pradesh and Tamil Nadu, were mooted. It has been envisaged to attract total investments of Rs 20,000 Crore in the two Defence Industrial Corridors of Uttar Pradesh and Tamil Nadu by the year 2024-25.

There is a reason to focus on Tamil Nadu for establishing a Defence Corridor given its long track record of presence of many private sector companies which are supplying equipment, and machinery, for the national defence and aerospace sector at least since 1973. Besides MSMEs, the state has several national public sector enterprises (HVF, OCF, EFA, OFT, HAPP, CFA, etc) which manufacture various defence and aerospace equipment.

The State has a new policy (2019) for the promotion of defence and aerospace sector that advocates harnessing the potential of having a large number of engineering colleges, institutions, and a track record of several years of specialisation in the R&D sector. Tamil Nadu has more than 60 companies that supply defence and aerospace components to national aggregations. Tamil Nadu aims to achieve “more than 30% share of the Indian Aerospace industry output” in the next decade.

Though the Tamil Nadu Defence Corridor was formally launched in 2019 covering cities like Coimbatore, Salem, Trichy, Hosur, Kanchipuram, Chennai, Vellore, etc, little progress has been made largely due to fragile relationship between the Union government and concerned departments/organisations. IIT Madras was roped in as Knowledge Partner to take up the Tamil Nadu Defence Corridor to the next level. Has the state government interacted with the Knowledge Partner in the right spirit and in the interest of the State to build a vibrant industry ecosystem? The answer is not known, but much progress has been made in Uttar Pradesh project.

According to the latest data available on 21.03.2022, the Uttar Pradesh state government has signed 63 MoUs with industries worth Rs.8,764 crore investment, of which 25 MoUs were finalised with Rs.2,527 crore investments for implementation under various stages. Actual investments of Rs 1,552 crore have been effected. 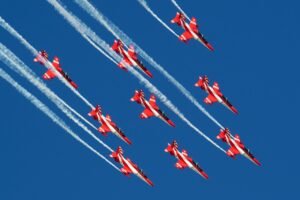 A Union government reply to a question in Parliament on the Tamil Nadu situation said “arrangements have been made through Memorandum of Understandings (MoUs), etc. for potential investment of Rs.11,103.00 Crore by 39 industries. Current actual investment in Tamil Nadu Defence Industrial Corridor is Rs.2,217 Crore”. Words like arrangements are used when there is nothing to show even on paper and that MOUs have not been signed for that amount.

In the case of the Uttar Pradesh Defence Corridor, the institutional and industrial collaborations signed through MoUs are transparent.

The state industry minister has said that some Rs 1,150 crore has been invested in the corridor projects, but no details have been given on what is off the ground already and who are the private players.

At the time of the defence corridor launch in 2019, it was reported that the corridor had attracted investments worth Rs.3123 crores. Tamil Nadu still aims to achieve investments worth Rs 10,000/- crore in defence and aerospace sector alone by the end of five years period. The state aims to achieve $ 10 billion worth value addition in the next decade.

After three years, the state government enterprise, Tamil Nadu Industrial Development Corporation Ltd (TIDCO), which promotes the Tamil Nadu Defence Corridor projects, announced that it intends “to engage a professional firm as providing PMU, strategy and advisory services for the Defence Industrial Corridor in Tamil Nadu.” The firms will be finalised by 30.06.2022. That such a firm is only to be engaged now raises questions over claims of investment.

Has the state government interacted with IIT Madras, the Knowledge Partner, in the right spirit and in the interest of the State to build a vibrant defence industry ecosystem?

There are many industrial corridors in Tamil Nadu and many could not take off in the past many years. Agitations led by the DMK had stalled them. Now the DMK-led government is struggling to build trust and confidence among business enterprises that Tamil Nadu is a worthy investment destination.

Land acquisition is a major issue for most of the major projects in the state.

Both the previous AIADMK government and the present DMK government have an intrinsic fear that if the state government implements the Modi government’s schemes, programmes, and major industrial projects the BJP will gain the upperhand and steal votes.

To get to kick-start all the major industrial projects in the state, the current government has to improve the law and order situation in every district, especially where the new major projects situated. Blaming the Union government alone is not enough to achieve real progress.