Vikram was the coolest Tamil movie of the 1980s. We knew India made rockets that went into space. But the rocket in Vikram could be used to attack other countries. It could even carry a nuclear weapon.

Really? India in the mid-1980s made missiles? India had nuclear weapons? Cool!

The Buddha would have smiled if he had seen Vikram. For it was a time when Mahatma Gandhi was still the father of the nation. And we still swore by peace, non-violence, non-alignment etc etc, officially that is.

Vikram let the cat out of the bag. India’s space programme was not designed just to explore space and gaze at the wonders of the universe. A key aim of the programme was to develop missile technology. In Vikram, that was a casual matter-of-fact, not embarrassingly spilled beans.

Kamal Haasan was this cool dude, a Tamil James Bond, in Vikram. In the past, we had Jai Shankar playing James Bond in Tamil movies. But the James Bond Jai movies were too campy and the science in it was unintentionally funny.

India’s nuclear power programme was also not really about nuclear power. We never made serious amounts of power from splitting the atom in any case. The real aim was always to make nuclear weapons. Vikram casually said India had nuclear weapons ten years before Pokhran II when everyone acknowledged, not so sheepishly, that India had nuclear bombs.

Kamal Haasan was this cool dude, a Tamil James Bond, in Vikram. In the past, we had Jai Shankar playing James Bond in Tamil movies. But the James Bond Jai movies were too campy and the science in it was unintentionally funny.

Vikram’s science was real. Sujatha, a real engineer with solid credentials, had conceived the story.

It was a time Rajiv Gandhi had tried to ignite Indian imagination by promoting computers. We heard the word Vikram being mouthed robotically in a song. Cool, again!

In Vikram, the double crossing turncoat who betrayed India was not a rakishly handsome bad guy cavorting with molls. He was a pot-bellied, middle class man who lived in Mylapore.

Vikram had let out another fact, casually. India’s intelligence services were indeed filled with Mylapore-types.

The cool quotient only expanded as the movie’s story unfolded. We were suddenly taken to an exotic country in the desert where people spoke a strange language. The discerning may have, however, heard Marathi words spoken in Salamia, the foreign nation somewhere west of Afghanistan.

As it so happened, the queen of Salamia was the all-Tamil Manorama. The carping, bitching queen unhesitatingly switches sides and helps the Indian agent, Kamal. Amjad Khan and Manorama certainly made an odd couple.

Vikram had terrorists, without using the ‘t’ word. Vikram had missiles but they were called rockets. Vikram portrayed religion as unscrupulous and bogus when the world hadn’t quite woken up to the threat posed by religious fundamentalism. Cool, yet again! 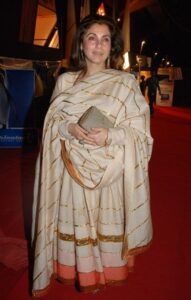 From being the exotic Bollywood import, Dimple Kapadia is now a familiar grandmother who plays grandmother roles.(Photo credits: https://creativecommons.org/licenses/by/3.0),

The coolest part of Vikram was, of course, Dimple Kapadia. Kollywood was boondocks at that time and imports from Mumbai, aka Bombay, were rather rare those days. To get the exotic beauty of Bollywood, who was staging a re-entry, to star in a Tamil film was a casting coup. Dimple danced, writhed, and spoke gibberish on her way to our hearts and to Vikram’s heart.

Vikram had terrorists, without using the ‘t’ word. It had missiles but they were called rockets. Vikram portrayed religion as unscrupulous and bogus when the world hadn’t quite woken up to the threat posed by religious fundamentalism.

Salamian gibberish was manna for Gangai Amaran who even composed a Salamian song.

All the cool stuff in Vikram are par for the course now. Nothing shocks us, nothing makes us wonder anymore. There are no great mysteries in the world, nothing unexplored, and nothing exotic either. And certainly there is no exotic Dimple Kapadia around. She is now a familiar grandmother who plays grandmother roles.

Kamal isn’t playing his age, however. The title song in Vikram 1.0 was in Vairamuthu’s chaste Tamil yet sounded fresh. Kamal’s Kuthu lyrics in 2.0 are strained and artificial. Fundamentalism, terrorism, missiles and international spy thrillers are hackneyed themes in 2022.

Vikram was an enjoyable sexist, misogynist dinosaur. Let dinosaurs belong in their age. Reviving them may invite trouble.

Whoever uses the word cool, anymore?