Mahinda Rajapaksa: the downfall of an uncrowned king

Once the uncrowned king of Sri Lanka and hailed as the hero of 6.9 million Sri Lankans, former President and incumbent Prime Minister Mahinda Rajapaksa is today referred to as the Naki Myna – a derogatory reference to an old man – by the very people who once hero worshipped him.

Mahinda Rajapaksa’s downfall is of his own making. With his first term in office ending, he developed an incurable addiction to power. His over confidence, greed and arrogance, marked the beginning of his end.

Rajapaksa’s winning façade was the charming and simple village guy image he projected. And a much-charmed lower middle-class voter base who identified themselves with him, catapulted him to the top seat of the all-powerful Executive President of Sri Lanka, in 2005.

When Rajapaksa assumed the mantle of the sixth Executive President of Sri Lanka, he was hailed as a true son of the soil who would finally make things right for the civil-war ravaged, beleaguered nation. Such was the hope an optimistic nation had in him. And he delivered, by ending the near 30-year civil war with the LTTE.

The nation bowed to him with gratitude and relief.

Had he the grace to retire with dignity after his first term in office ended in 2010 – one year after the military defeat of the LTTE – history would have remembered Mahinda Rajapaksa as one of the greatest heroes this country has ever known. But, it was not meant to be.

Surrounded by self-serving sycophants, Mahinda Rajapaksa was egged on to run for office a second time, brandishing his sole qualification, ‘I Won the War’. In 2010, Mahinda Rajapaksa was voted into power for another 5 year-term as Executive President of Sri Lanka by the majority community who had elevated him to a demi-god status.

With the 2009 military defeat of the LTTE going to his head, and his ego inflated by the mass adulation, Rajapaksa lost touch with ground realities. He appeared convinced that he had won the approval of the masses to be their ‘King’, ad infinitum. Thereafter he behaved as though the nation had granted him carte blanche to do as he pleases.

Before long the infamous ‘banner culture’ – rooted in Tamil Nadu politics – was enthusiastically embraced by the now megalomaniacal Mahinda Rajapaksa. Just as Jayalalitha’s political losses were partly attributed to this banner-culture, so was Mahinda Rajapaksa’s. It felt like Rajapaksa was forcing himself down everyone’s throats and people started choking and throwing up.

It is no secret that Mahinda Rajapaksa is a racist, and he detests and looks down on the Tamil community of Sri Lanka with a vengeance. His despise of Tamils is such that he even objected to the planting of palmyra trees in Galle Face Green – the ocean side urban park in the heart of Colombo – as the tree is associated with Tamil culture. He also imposed a de facto ban on Sri Lanka’s national anthem being sung in Tamil at national events.

Mahinda’s despise of Tamils is such that he even objected to the planting of palmyra trees in Galle Face Green – the ocean side urban park in the heart of Colombo – as the tree is associated with Tamil culture.

Thus, post war, he ignored the golden opportunity to address the grievances of Sri Lanka’s second largest ethnic community – the Tamils – and bring about much needed peace and reconciliation between the polarised Sinhalese and Tamils.

As per the general perception beyond the shores of Sri Lanka, not all Tamils in the country are pro-LTTE. In fact, the mainstream Tamil leadership was also targeted and assassinated by the LTTE during 1980s and 1990s. Sri Lankan Tamils have genuine political grievances, which Rajapaksa overlooked completely. The 13th amendment to the Constitution could have been a starting point but has been totally sidelined to date.

Beating his chest about winning the war and vanquishing the enemy – the LTTE – Rajapaksa’s vision and mission became focused on establishing himself as the ‘King of Sinhala-Buddhist Sri Lanka’.

He began building his kingdom with mega white-elephant projects – squandering billions of US dollars borrowed mainly from China, thus becoming effectively caught in China’s debt trap – named after him. Generations of Sri Lankans yet to be born, will be forced to pay the massive debts for these narcissistic Rajapaksa’s vanity projects.

Any leader who remains too long at the helm, like Rajapaksa did, loses touch with reality. The common man’s vote he wooed with false hopes and promises were forgotten and left to rot. The ‘good life’ at the top and all the pampered gl 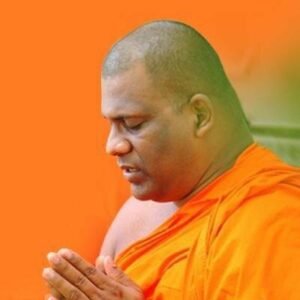 ory that went with it, gave him amnesia.

Firmly entrenched in office during his second term, Rajapaksa then went on to stoke the tinderbox of ethno-religious extremism. This time round the Tamils were spared, and the minority Muslim community and Evangelical Christians were targeted.

He conveniently turned a blind eye to the Sinhalese Buddhist extremists led by the blatantly racist Buddhist monk, Gnanasara and his ilk, when they went on the rampage against the Other. No matter what these saffron-robed goons did to insult and harm their victims, Rajapaksa simply looked the other way.

Never did we Sri Lankans – the Sinhalese, Tamils and Muslims combined – feel so polarised on the grounds of our ethnicity and religious beliefs as under the Rajapaksa leadership. Had Sri Lanka’s voter base not stood its ground in the January 2015 presidential elections and ousted Mahinda Rajapaksa, when he was eyeing a third term as President, Sri Lanka would have been looking at yet another protracted civil war. Never before in Sri Lanka’s post-independence history has the nation seen such a blatant culture of Sinhalese Buddhist supremacism, as under the autocracy of Mahinda Rajapaksa.

Rajapaksa’s rising unpopularity was further fanned by him granting carte blanche to his family – brothers, sons, cousins, nephews and a niece – to abuse the system. Thus, corruption and nepotism became synonymous with the Rajapaksa regime. The general perception in Sri Lanka about Rajapaksas’ became an extremely negative one, not only amongst the minority communities, but the majority as well.

After the civil war ended, people in the North and South – cutting across the ethnic divide – had hoped for a clean government, good governance, devolution of power and a corruption free administration. But this was not to be under the Rajapaksa regime.

Mahinda Rajapaksa failed to realise that unlike him – still basking in the glory of the glamourous war victory – post-war, people were living in their present, and wanted a better future and a comfortable present.

Mahinda Rajapaksa failed to realise that unlike him – still basking in the glory of the glamourous war victory – post-war, people were living in their present, and wanted a better future and a comfortable present.

With the change of political regimes in January 2015, many, especially the minority ethnic communities, heaved sighs of relief. A final peace under a more inclusive political administration seemed more probable, now. But the malignant roots of the cancer of religious extremism stoked by Mahinda Rajapaksa remained, but controlled to a great extent.

Rajapaksa’s family and governments are notorious for their corruption and abuse. They have been accused of abusing State resources, fraud, misuse of power, murder, and illegal money-laundering methods through which $5.31 billion – some claim it is far more – have been taken out of the country.

Today, the chief prelates of the three Buddhist monastic fraternities – once favouring Mahinda Rajapaksa – have joined the mass chorus in demanding his resignation as the Prime Minister.