Vijay’s Beast, produced by Sun Pictures and distributed by Red Giant Movies, has created a very audible buzz among people. Fans and others are eager to see what the latest movie has to offer. Brisk sales of tickets are being reported. Vijay fans are hoping Beast will get past Valimai’s ticket sales. Ajith fans are apprehensive that may come true. The truth is that Red Giant Movies had distributed Valimai too.

Sun Pictures are run by the Maran brothers, and Red Giant is Udayanidhi Stalin’s – not exactly strangers to each others. Sun Pictures and Red Giants dominate in the production and distribution of many of the big budget Tamil films. KGF 2 that will compete with Beast is releasing only on April 14, leaving the opening day free for Beast.

Beast did not have a proper audio release function. Vijay usually uses this occasion to make a speech in these events that typically create a buzz and increase viewer interest. Rajinikanth used to do this regularly.

Social media was abuzz that the reason for a muted audio release was that it would mar Udayanidhi Stalin’s standing as an actor and politician. But there doesn’t seem to be much truth to this. Both the firms are invested in Beast’s success. Moreover, it’s up to film viewers to accept or reject actors and make them stars.

There is some historical context to this. M Karunanidhi tried to make an actor out of his son, MK Muthu, who debuted in a film called Pillaiyo Pillai. Produced by Murasoli Maran, the Krishnan-Panju twins directed it. The script was written by Karunanidhi. Muthu acted in films between 1972 and 1977 when Karunanidhi was in power but he couldn’t really make much headway.

Then another son of Karunanidhi, today’s chief minister, had a stint as an actor. He too didn’t shine as actor. Stalin’s son has been acting in the film industry. He also has not really done well as an actor. Many of the films in which he has acted are his own productions. 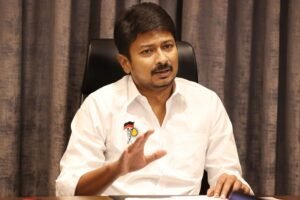 As if to rebut the talk that Vijay is being subdued, Sun Pictures showed an interview of Vijay on April 10 for pre-release publicity. In this interview, Vijay wished viewers a Happy Tamil New Year although Karunanidhi was always insistent that the first day of Tamil month, Thai, marked the real Tamil new year.

Karunanidhi used movies to propagate his political views and ideology. For the 13 years in which MGR was ruling and he was out of power, Karunanidhi wrote the dialogues for more than 20 films propagating his views. The films served to ensure Karunanidhi was on the scene. But his progeny consider movies as a commercial venture, not as a vehicle for conveying ideology or political views.

For Beast, Sun Pictures had created a commercial complex as set. Beast will be followed by big starrers. Rajinikanth, Dhanush and Vijay Sethupathi are among the actors signed up by Sun Pictures upcoming films.

Sun Pictures has produced some 29 pictures so far. Rajini acted in Enthiran, Petta and Annathe. Besides Beast, Vijay starrers include Vettaikaran, Sura and Sarkar. Dhanush acted in Padikkathavan, Mappillai and Adugalam. A recent hit was Surya’s Etharkum Thuninthavan. Ajith, Vishal, Jayam Ravi and Siva Karthikeyan are some of the A list stars who act in Sun Pictures films.

In politics, the DMK stands for social justice and aims to create a level playing field against those who dominate in society. The firms that are run by people associated with the DMK should reconsider their dominance and frontline role in films.

While Sun Pictures’ growth is sky high, Red Giants is not to be left behind. The first film produced by this firm was Vijay starrer Kuruvi. The event marking the success of this movie which ran for 150 days was presided over by director K Balachander. Red Giants’ next, Adhavan, ran for 100 days. Kamal Haasan was the chief guest in that movie’s function. Almost half of this firm’s productions had Udayanidhi acting.

Mari Selvaraj who directed hit movies such as Pariyerum Perumal and Karnan will direct his next movie, Mamannan, for Red Giants. The hero of the film is Udhayanidhi Stalin, going by the pre-release publicity material.

Sun Pictures and Red Giants are not just typical film production, distribution companies. They can get any frontline star and make a movie with them quickly.

If one or two firms dominate any sector, then other players suffer. This not only creates imbalance but is also not fair. The progress of other firms will be impeded unfairly.

In politics, the DMK stands for social justice and aims to create a level playing field against those who dominate in society. The firms run by people associated with the DMK should reconsider their dominance and frontline role in films. A change in the attitude of films is good for society and the film industry.