Kausalya Srinivasan, a Bharatanatyam expert and Fulbright scholar, has embarked on a project to teach the dance form to Irular children in Tindivanam.

On a recent evening, Irular children and their parents had gathered at the Thai Tamil school in Rosanai, Tindivanam. It was an awareness programme in which they were told about Bharatanatyam and how it will be taught to the children. Kausalya Srinivasan told the parents and children that Bharatanatyam belonged to everyone. Anyone can learn the art form. “Enthusiasm, effort and dedication were the only requirements,” she told them.

Kausalya called a few children on to the stage and taught a few dance movements to them. She made them perform the movements. Some of the children gathered showed interest to learn the dance form. This was followed by another awareness meet at Melmalaiyanur village. Here too some Irular children wanted to learn Bharatanatyam. With the help of Sister Lucina, a similar awareness meet was organized at Vikravandi.

Kausalya owes the inspiration for her efforts to an opportunity she got to perform one evening at the Kennedy Center at Washington DC in the US where she was resident as a Fulbright Scholar. The year was 2003. Kausalya had this idea of Arts For All which would make arts available to all. At that time she was adjunct faculty at Bridgewater State University in Massachusetts. She taught Bharatanatyam to students from diverse ethnic groups including African-Americans, Japanese and others.

Kausalya’s first foray into teaching blind students was in 2001 when she was a scribe for the students at Sirumalar Special School. The students would feel her fingers and learn dance postures and mudras. This experience was instrumental in her becoming Fulbright scholar. “I have been interested in teaching Bharatanatyam to people from cultures that have little exposure to the art form,” says Kausalya.

After watching Jai Bhim film, she started wondering what if she taught Bharatanatyam to Irular children. She approached Justice (retd) Chandru, whose experience forms the basis of the film, who lives near her house. Chandru put her on to Professor Prabha Kalvimani who works for the welfare of Irular community. Her project then started.

Professor Prabha Kalvimani, an activist who works for the welfare of Irular community, says: “I see this as an initiative through which Irular children get an opportunity to learn an art form. It will give them a lot of confidence that they too can achieve something they set their minds to it.” 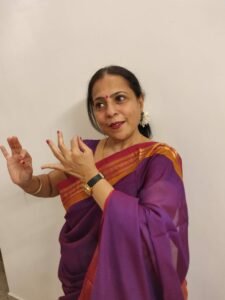 Kausalya has planned to teach interested students directly and online. A WhatsApp group has been formed for the students. The training would extend over a one-year period. “If 50 people come forward, at least five to ten people will get trained to proceed further,” she says.

Professor Kalvimani says those Irular students starting from Class 6 will be taught Bharatanatyam. “I see this as an initiative through which Irular children get an opportunity to learn an art form. It will give them a lot of confidence that they too can achieve something they set their minds to it,” he says.

Kausalya learned dance from famous danseuse Chitra Visveswaran. She went to the US on a Fulbright scholarship in 2003. She got an Indian government fellowship to do research on Vaishnavite mudras in Bharatanatyam. Kousalya has been running a dance school called Sunarthaga for some 30 years which has now become a trust. The Art For All initiative is a part of the trust’s activities.